This egg drop soup recipe makes an egg flower soup just like your favourite Chinese restaurant does – a velvety yellow soup so dense with creamy egg wisps that it’s almost like a liquid omelette. Slender slices of shitake mushrooms ensure it isn’t! A drizzle of sesame oil, pinch of white pepper and sprinkle of spring onions complete this comforting broth.

This classic egg drop soup recipe will make you an ‘egg flower soup’, as the Chinese name literally translates to, which tastes just like the egg drop soup I grew up eating at our favourite neighbourhood Chinese restaurant in the western suburbs of Sydney, which I imagine tastes very much like a Chinese-American egg drop soup.

Our egg drop soup recipe is this week’s edition of Weekend Eggs, a series of recipes on quintessential egg dishes from around the world, which we launched with Grantourismo back in 2010 with our year-long global grand tour focused on slow, local and experiential travel.

On that trip, we settled places for two weeks at a time to get an insight into how locals lived, and in each place that we stayed, we explored the local food, engaged with local cooks and chefs, and learnt to cook local specialties.

We shared those in Weekend Eggs and another long-running series, The Dish, for which Terence shared the recipes of quintessential dishes he learnt to cook in each place.

Now before I tell you more about this egg drop soup recipe, I have a favour to ask. Grantourismo is reader-funded. If you’ve enjoyed our recipes or other content on the site, please consider supporting Grantourismo. You could buy us a coffee and we’ll use that donation to buy cooking ingredients for recipe testing or contribute to our epic original Cambodian cuisine history and cookbook on Patreon.

You could also shop our Grantourismo store on Society6 for gifts for foodies, including fun reusable cloth face masks designed with Terence’s images. Now let me tell you all about this egg drop soup recipe.

Thursday nights were Late Night Shopping Night, which was Chinese Restaurant Night, when I was a kid growing up in the western suburbs of Sydney, and shops were closed on other nights and on Saturday afternoon and Sunday. Those were the days – when we had our work/life balance right!

Thursday night was Chinese Restaurant Night because we went out to do our weekly shopping around 6pm after mum and dad got home from work, and then because we were all so tired from our big outing to the supermarket, we hit one of our two favourite Chinese restaurants opposite the railway station for dinner.

We always started with soup (and ended with fried ice-cream!) and while the selection of main courses varied, we always started with one of a few soups – wonton soup, corn and crab soup or egg drop soup. It was a tough choice. I adored all three. But mum and dad would always ensure they ordered the soups I didn’t choose, in case I changed my mind.

This classic egg drop soup recipe will make you that Chinese restaurant ‘egg flower soup’, as the Chinese name literally translates to, which I grew up eating at our favourite neighbourhood Chinese restaurants. 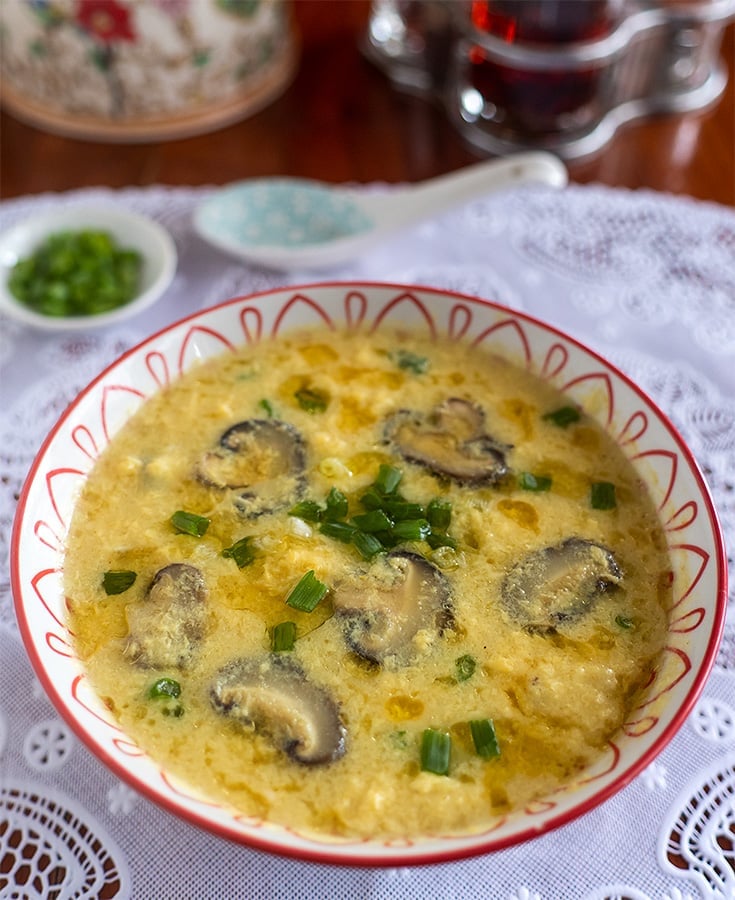 Egg drop soup is often referred to as a Chinese-American dish, like chop suey and General Tso’s chicken (although that’s actually from Taiwan), however, egg drop soup is found all over China, both in restaurants and cooked at home, and there are probably as many variations as there are cities in China.

In China, the broth is generally thinner than the Chinese-Australian and Chinese-American restaurant egg drop soups, which are thickened with a corn starch slurry while the egg can vary from fine wispy strands that can look almost flower-like to thicker ribbons to a flat egg ‘sheet’.

Egg drop soup recipes served in restaurants tend to vary by region and province in China, while in the home, anything goes. Home cooks might add vegetables that need to be used, such as carrots, which are diced, or leafy greens, while bowls are customised with condiments and garnishes by individuals to suit their taste – just as we would with a bowl or rice porridge or noodles.

Just a couple of tips to making this classic egg drop soup recipe – and they’re important tips if you want to get it right. 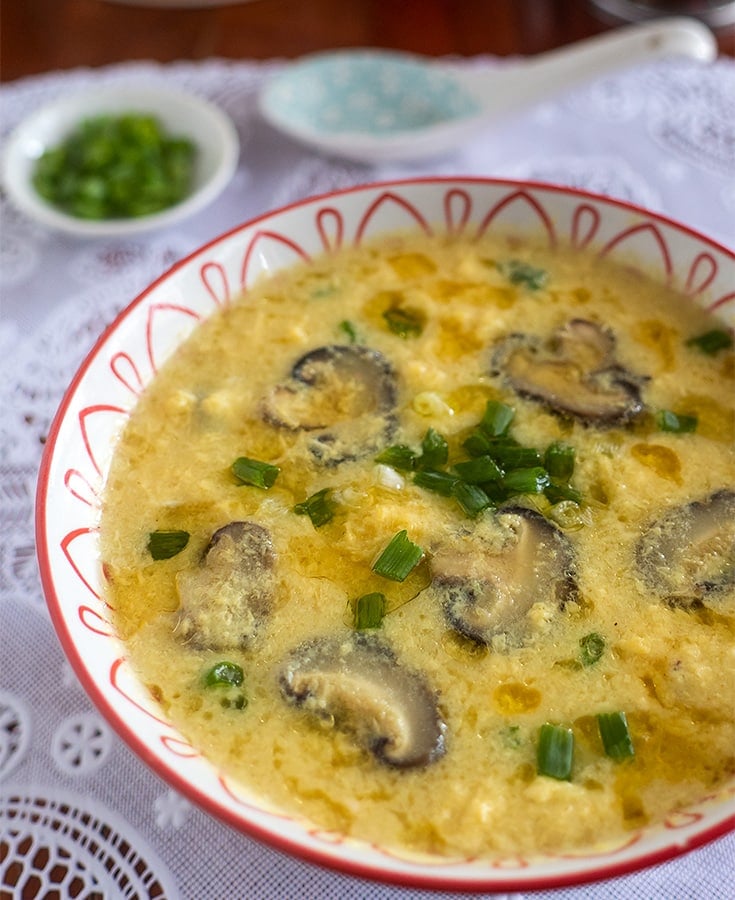 I only have a couple of tips to making this classic egg drop soup recipe as it’s really very easy once you get the hang of the egg – and once you decide in what form you like the egg so you can create it as you like.

Don’t add the corn starch directly to the soup as I’ve spotted in some egg drop soup recipes. For starters, that’s not what a slurry is. Make the slurry first and then add the slurry to the soup.

If it’s not thick enough for you, you can always quickly make another slurry with an additional tablespoon of corn starch and ¼ cup of water. Then if you find it too dense, you can reduce it with more boiling water.

Note that if it’s too dense, the eggs won’t set properly. Also keep in mind that you’ll need to adjust your seasoning.

To create those ‘egg flowers’ (use your imagination), you must stir the soup continuously (some old Chinese cooks swear it must be clockwise), and then add the egg very slowly to the soup at the same time as you’re stirring.

Some Chinese cooks simply dip a large fork or pair of chop sticks into the whisked eggs then drizzle the egg into the soup to create super-wispy trails of egg. For small strands, I’ve spotted cooks using a teaspoon to very slowly drizzle the egg in.

And for larger ribbon-like swirls or even round egg drops, I’ve seen Chinese cooks very slowly pouring the egg from a small jug with spout into the soup. The smaller the better. Take care not to pour or stir too fast otherwise the egg will simply emulsify.

Remember to taste your egg drop soup again and adjust the seasoning if needed, then distribute the soup between bowls, drizzle with sesame oil, sprinkle with white pepper and scatter some more green scallion slices on top and serve immediately.

Please do let us know in the comments below if you make this classic egg drop soup recipe as we’d love to know how it turns out for you.