As a child, I only knew three things about Siberia – it was one of the coldest places on earth, it was home to horrific gulags where people were forced into back-breaking work until it killed them, and that Siberia was the reason my Russian great-grandmother never smiled.

My grandmother on the other hand, always had a twinkle in her eye and dimples when she smiled. Baboushka didn’t serve pelmeni in soup. So I had no idea this bone-chilling cold place called Siberia, long associated with brutal labour camps, produced such warming bowls of dumpling goodness, known outside those frozen lands as Siberian pelmeni.

If you’ve cooked and eaten the Russian and Ukrainian dumplings called pelmeni and vareniki and you’ve loved them, and you’re as devoted to soups as I am, then you’re going to adore this Russian dumpling soup recipe for Siberian pelmeni.

I’ll tell you more about this dumpling soup recipe in a moment, and you can click through to this Russian pelmeni recipe for the history of pelmeni, but, first, I have a favour to ask.

Grantourismo is reader-supported. If you’ve enjoyed our recipes, particularly my Russian-Ukrainian family recipes, please consider supporting Grantourismo and what we do here by buying us a coffee (we’ll use our coffee money to buy cooking ingredients for recipe testing) or making a donation to our epic, original Cambodian cookbook and culinary history on Patreon.

You could also buy something from our Grantourismo store for gifts for foodies, including fun reusable cloth face masks designed with Terence’s photography. Another way to support the site is by using our links to book accommodation, rent a car or campervan or motorhome, buy travel insurance, book a tour on Klook or Get Your Guide.

We might earn a small commission from your purchases on sites, such as Amazon, and we have plenty of inspiration here in our round-ups of James Beard award-winning cookbooks, cookbooks by Australian chefs, classic cookbooks for serious cooks, cookbooks for culinary travellers, travel books to inspire wanderlust, gifts for Asian food lovers, picnic lovers and travellers who love photography.

Now let me tell you more about my great-grandmother and this dumpling soup recipe for Siberian pelmeni soup.

Before I tell you all about my Russian dumpling soup recipe for Siberian pelmeni, I want to tell you about my great grandparents. We used to call my great grandmother ‘baboushka’ and my baboushka ‘baba’ to prevent any confusion, although the two women couldn’t have been more different. Baba was always happy – until her oldest son, my uncle Sandy, died, and then she was inconsolably sad, as we all were.

Before that, before the event that changed our family forever, baba was perpetually cheery. Her mother, my great grandmother, was melancholic at best. To my young self she seemed so miserable, so heartbroken, that nothing could make her smile – even a small stubborn child who just wanted her to play, and tried to drag her by her tiny wrist, with its translucent skin, from her chilly bedroom out into the sunshine and warmth outside.

Dressed in a floral woollen headscarf, long-sleeved shirt, thick cardigan, and little fleece-lined boots that peeked out from beneath her heavy ankle-length skirt, baboushka dressed for the bitter-cold of Siberia, no matter the season in Australia, even in the sultry summer in Sydney.

Yet my great grandmother, Daria, had never been to Siberia. She and my grandparents, who identified as Russian, were born during the Russian Empire, in the lands we now know as Ukraine, but which had been ruled by everyone from the Scythians and Vikings to the Mongols and Ottoman Turks.

My great grandmother was born in the late 1800s and her daughter, my baboushka, was born on the eve of the October Revolution. Aside from treasured memories of Black Sea holidays and summers spent by the sea on the Crimea, much of baba’s youth was marked by war and tales of escape from misery and hunger. I think that’s why baba was always cooking and feeding us all like there was no tomorrow.

I can’t recall exactly when my baba and baboushka were separated from my great grandfather. All I know was that he had been sent to a Siberian gulag. My baba’s papa was one of many millions of dissidents forced into exile and hard labour in the brutal prison camps established by Lenin and maintained by Stalin on the icy windswept tundra of Siberia.

If the bitter cold didn’t kill the Siberian exiles, the gruelling work did, which is why my family thought my great grandfather was dead. Baba and baboushka had tried to find him for many years, even after the war, when they and papa and my mother, then just a baby, had sailed on the Anna Salen from Naples to Sydney and settled in Australia.

Then one day, a telegram arrived from the Red Cross. They’d located him. My great grandfather was alive and well. He’d somehow survived Siberia’s crushing gulags and the bitter cold. However, thinking his wife and daughter had died during the war, my great grandfather remarried. He had a new wife. A new family. A new life. 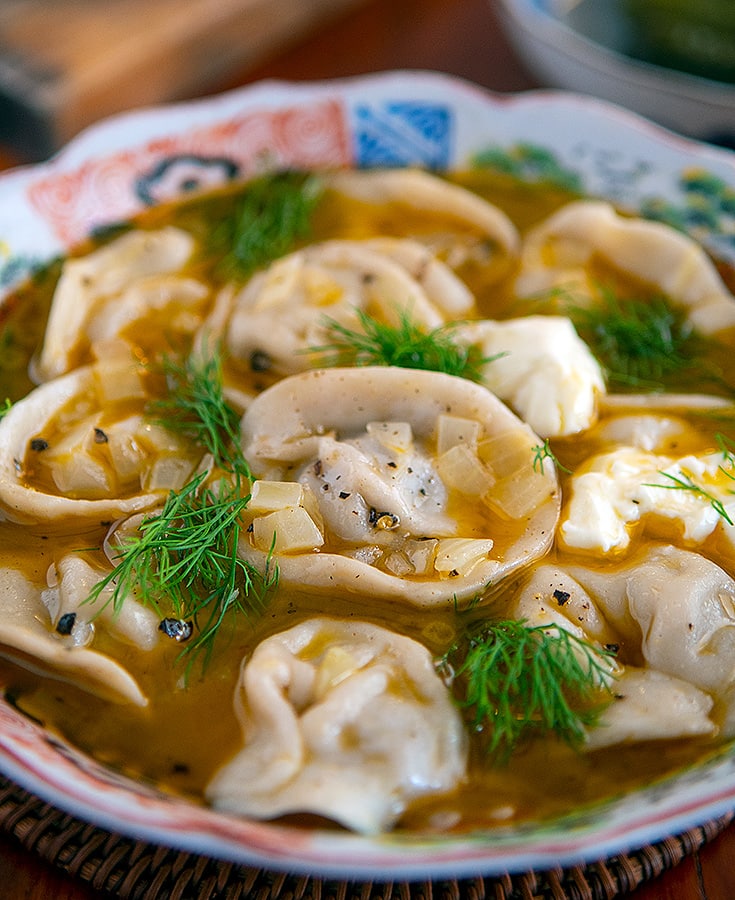 My baboushka’s repertoire included Russian dishes and Ukrainian dishes and dishes from the cuisines of other nations that were part of the Union of Soviet Socialist Republics (USSR). We had relatives in Uzbekistan, for instance, and baba made plov when my great aunt visited from Tashkent. But baba’s repertoire didn’t stretch all the way to Siberia.

Baba never made Russian dumplings in broth, which is essentially what Siberian pelmeni is, pelmeni served in a soup that was made from the water in which the dumplings are boiled. My mother and I slurped our first Siberian pelmeni soups in Russia not Australia, on a holiday that Terence and I took mum on after dad died.

Who knows… we can only live in hope, as my great-grandmother did for so long.

I’ve got some important tips to making this dumpling soup recipe for Siberian pelmeni soup to share, so please do read this as you have some decisions to make, starting with how many pelmeni you’re going to make.

My dumpling soup recipe should make you around 50 dumplings or so if you use a 7cm diameter cookie-cutter – or rim of a glass turned upside down – to create the dumpling casings in the thickness of the pelmeni in the photos in this post.

If you’re serving your Siberian pelmeni soup as a hearty main course with bread, dill pickles, perhaps a classic garden salad, then you’ll probably want a dozen or so dumplings per bowl, which means you’ll get four bowls of soup.

If you’re serving the soup as a starter to heavier courses such as beef Stroganoff, chicken Kiev, Russian kotleti, etc, or you’re serving it as one of an array of dishes to be shared family-style, then you’ll probably only distribute six dumplings per bowl, which will give you eight bowls of dumpling soup.

Now, having said all that – along with the fact that the pelmeni are served in a soup – a more delicate and smaller size dumpling with a thinner casing is what distinguishes Siberian pelmeni from traditional Russian pelmeni (in my experience, anyway) so you may wish to go for a 6cm diameter and, in that case, you will end up with more dumplings.

So what do you do with all these dumplings if there are only two of you? You could halve or quarter the quantities, of course, or you could simply make 50 dumplings and freeze half, dusted with flour in sealed plastic zip-lock bags or, if you have a large freezer, on covered trays.

Or you could boil them all, eat half as Siberian pelmeni soup the first day, refrigerate the rest, and fry the remaining pelmeni the next day. I’ve got a recipe and tips for fried pelmeni here. They’re fantastic with a simple garden salad or in winter, served alongside stuffed cabbage rolls or piroshki.

If you have any of the ground meat filling left – sometimes we do and sometimes we don’t – this also freezes well in sealed zip-lock bags. And if you don’t want to make as many as 50 dumplings – though the more you make the easier it gets and faster you become – you can wrap the dough in cling wrap and refrigerate it or freeze that, too.

A quick couple of tips to making the dough. Firstly, don’t add all the water at once. Sometimes I find, depending on the flour I’m using, that I don’t need as much as I’ve specified in the recipe, and sometimes I find that I need a little more. So gradually add a third of the water to the flour, combine the two with your hand, then gradually add another third of the water, continuing to combine until you have a texture that you can begin to knead.

Feel free to get creative with both the Siberian pelmeni filling and the soup. When my parents made pelmeni at home, my dad would season the filling far heavier than baboushka would, adding a lot more salt and pepper, herbs and spices, and even soy sauce.

We use a big 11.5 litre stock pot or soup pot to boil our pelmeni and other dumplings to get that rolling boil and give the dumplings lots of space. The pelmeni move around the water quite a bit, so it’s easier to tell when they’ve properly risen to the surface when they’re in a big pot.

My grandmother served fresh fragrant dill picked directly from their garden with her pelmeni and soups, as do I, however, Siberia is much too cold to grow herbs such as dill for more than a few months of the year, so Siberian pelmeni probably wasn’t always served with dill. If you’re not a dill-lover, replace it with other fragrant herbs. Flat leaf parsley works perfectly well, but I prefer celery leaf and stalks, which I roughly chop.

Please do let us know if you make this Russian dumpling soup recipe for Siberian pelmeni in the comments below as we love to hear how our recipes turn out for you.