Summer corn season is almost here in Cambodia and it’s one of my favourite seasons as there’s just so much you can do with corn. While I’m happy to munch into a simple piping hot cob of corn, dripping with butter and generously sprinkled with salt, I also can’t resist making corn salads, corn fritters, corn salsas, corn soups, and Mexican corn in a cup (my all-time favourite!). We have loads of corn recipes here.

Then there’s creamy corn chowder, which I’m happy to savour in summer or winter, a deliciously dense creamy corn soup, traditionally thickened with milk or cream, although I prefer potato, imbued with spices and herbs, and sprinkled or served with crackers or biscuits in the early days, although I’ve opted for crunchy homemade croutons instead.

My corn chowder recipe is both dairy-free and vegetarian, which means I’ve skipped another key ingredient of chowders since the start, and that’s pork, which in modern day chowders generally takes the form of crispy fried strips of bacon sprinkled on top.

If you enjoy my corn chowder recipe for a creamy potato corn chowder with Parmigiano Reggiano, scallions and croutons, please also try Terence’s recipe for sweet corn soup with ginger, turmeric and chilli oil, inspired by Chinese and Southeast Asian soups. It’s another favourite of mine. Hint, hint…

Now before I tell you more about my best corn chowder recipe for a creamy corn and potato chowder with parmesan, scallions and croutons, I have a favour to ask. Grantourismo is reader-funded. If you’ve enjoyed our recipes or other content on the site, please consider supporting Grantourismo. You could buy us a coffee and we’ll use that donation to buy cooking ingredients for recipe testing or you could contribute to our epic original Cambodian cuisine history and cookbook on Patreon.

You could also shop our Grantourismo store on Society6 for gifts for foodies, including fun reusable cloth face masks designed with Terence’s images. Now let me tell you more about this corn chowder recipe for a creamy corn and potato chowder with parmesan, scallions and croutons and share a potted history of chowder.

If you’re only here for my creamy corn chowder recipe, you better keep scrolling, because I wanted to share some of the fascinating history of clam and corn chowders that has consumed me while I’ve been recipe-testing. I’ll include research sources and links at the end for those of you as excited by culinary history as I am who are keen to read more.

While we often think of chowder – corn chowder, clam chowder, fish chowder, and so on – as being a quintessentially American soup, ‘chowder’ has Latin roots, from ‘calderia’, which first referred to a hearth and later a cooking pot, which in French became ‘chaudiere’ and in English ‘cauldron’. Of course, that’s the simplified etymology! It’s so much more complex than that.

‘Chowder’ was thought to have come from the English word ‘jowter’, which meant fishmonger, which obviously makes sense, as the first English chowders were made with fish, seafood and shellfish and were essentially fish stews, simmered in a cauldron.

Cooked on fishing boats and other ships, those early chowders typically featured layers of salted pork (which probably explains the later inclusion of crispy fried bacon), fish, and biscuits or crackers used to thicken the broth (later, they’d be showered on top or served on the side).

The earliest known chowders were made in the French fishing villages between Brittany and Bordeaux and just across the English Channel in Cornwall. References dating to the 16th century describe fishing boats returning to their villages from sea with their catch, to big black cauldrons over fire awaiting them.

It was English settlers who took their chowders across the pond, where’s there’s plenty of archaeological evidence to attest that native Americans were making shellfish chowder, as evidenced by metres-high piles of clam and oyster shells which were found on the coast. 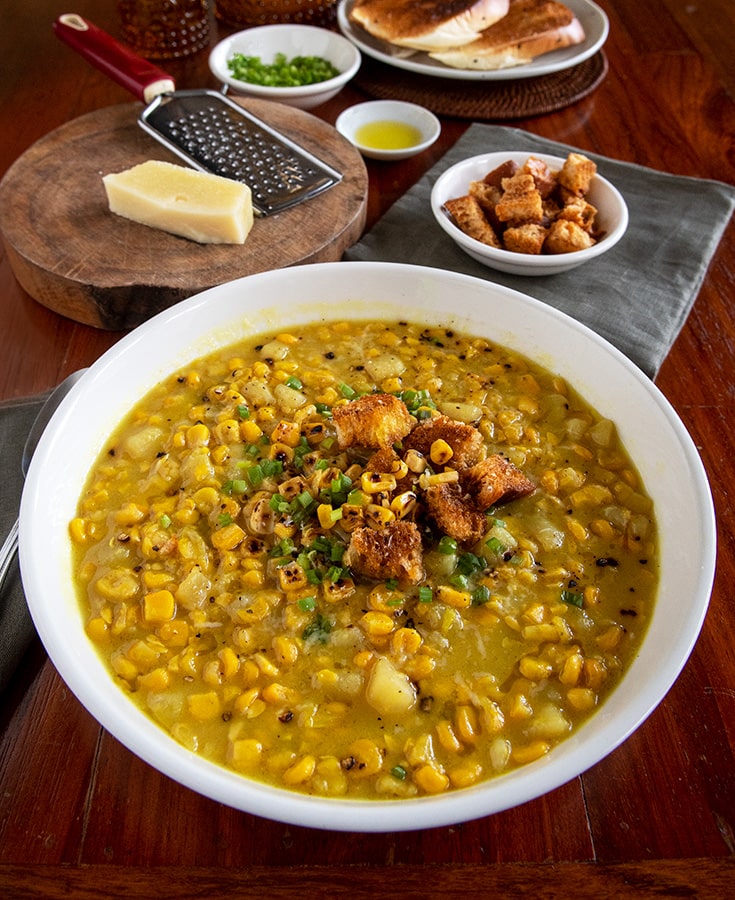 The first published American ‘chouder’ recipe, dating to 1751, was a fish chowder featuring layers of onions, pork and fish, seasoned with salt and pepper, ‘spice’, parsley, marjoram, and thyme, with biscuits soaked in the soup. Fifty years later, the second edition of Amelia Simmon’s American Cookery included a similar recipe, but with the addition of potatoes, pickles, apples or mangoes, and garnished with parsley.

In 1828, a recipe in Mary Randolph’s The Virginia Housewife included a similar layered fish chowder cooked in a Dutch oven, with layers of chopped onion between the fish, a layer of crackers soaked in milk on top, along with glugs of white wine and water. It was stewed for an hour before the gravy was thickened with flour, butter and parsley and it was served piping hot.

Clams appeared for the first time in a chowder recipe in Lydia Maria Child’s The American Frugal Housewife, published in 1832, which still featured the layering technique, along with the addition of lemons, beer and tomato ‘catsup’. Further recipes following throughout the mid to late 1800s, when clam chowder would become one of the most quintessential dishes of northeast USA.

But you’re probably wondering how we got from clam and fish chowders being made on the coast to our corn chowder recipe, which would have originated inland? Native Americans grew corn, which they traded with those early colonisers, and also made corn stew, a recipe for which was documented in Iroquois Foods and Food Preparation by F.W. Waugh, dating to 1916.

Corn thickened and added flavour to chowder, but was slow-cooked with chicken rather than seafood, flavoured with saffron, and sometimes featured egg noodles. In Elizabeth Ellicott Lea’s 1853 edition of Domestic Cookery, chicken and corn were layered, sprinkled with salt, pepper and parsley, boiled with butter and water, thickened with milk and flour, and served with dumplings. Noodles and dumplings were a contribution of German and Central European settlers.

Of course, there were also recipes for corn chowders, seafood chowders and potato chowders in cookbooks in Australia and New Zealand in the 1800s and 1900s, when the potato itself was the thickening agent, and appeared to be the ingredient that distinguished a chowder from a soup. 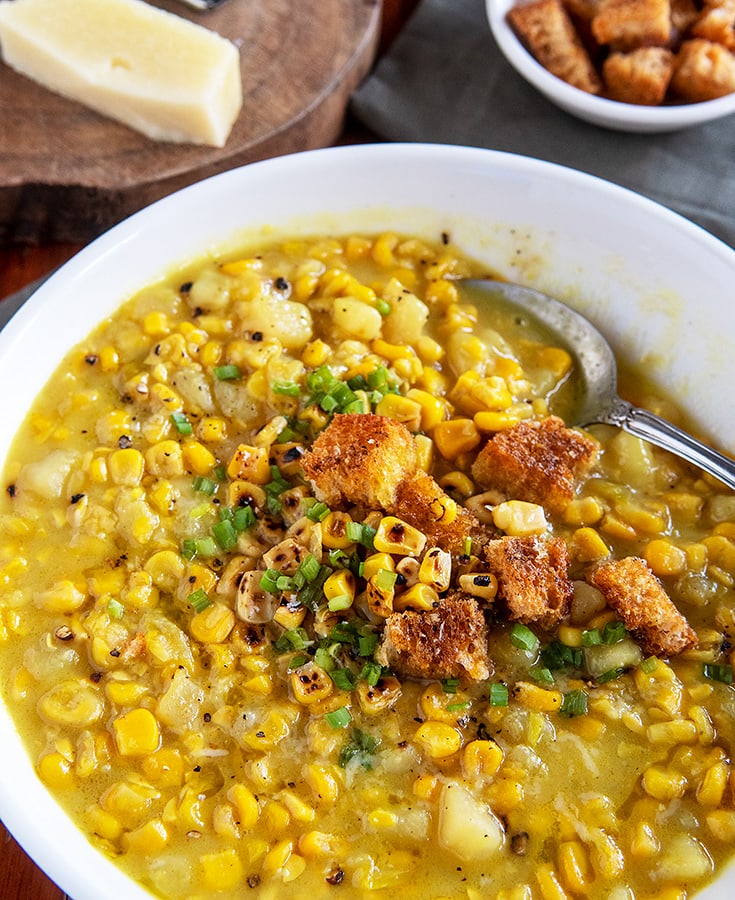 So, what makes an American corn chowder a chowder then and not a corn soup or corn stew? The addition of dairy in the form of milk and later cream, thickened with potatoes or a roux. Modern chowders often feature cheese and bacon, and even chillies to give the chowder a kick of heat.

As usual, I only have a few tips to making my creamy corn chowder recipe as it’s super easy. The first thing you’ll notice is that it’s a vegetarian recipe, so no bacon, fish or clams.

It’s also a dairy-free recipe, so no milk or cream. The creaminess of my creamy corn chowder recipe, comes from breaking down the potatoes and half of the corn, as you would for creamed corn, and I use olive oil instead of butter.

Saffron popped up in a few early recipes during my research, but I opted for the less expensive and more readily available ground turmeric, to add colour and an earthiness to the flavour. I liked the idea of spices but opted for my go-to ground paprika and a little curry powder

I’m not a fan of parsley and opted for scallions or spring onions instead and skipped the crackers and biscuits in favour of croutons. See Terence’s guide to making homemade croutons. Enjoy!

Please do let us know in the comments below if you make our creamy corn chowder recipe as we’d love to know how it turns out for you.