This Chinese lions head meatballs recipe makes shizi tou, fried melt-in-the-mouth pork meatballs braised with Chinese cabbage. A classic of Huaiyang cuisine, traditionally the meatballs were enormous, each sitting on a cabbage leaf which forms the mane. My meatballs are cub-sized for convenience as much as to avoid wastage. The recipe is adapted from Yan-Kit’s Classic Chinese Cookbook.

With this Chinese lions head meatballs recipe scheduled today, it was fitting that I woke to the sounds of a Chinese lion dance, the clashing cymbals, flute, drums, and gong providing a soundtrack to my morning routine. As I watered the plants and fed Pepper, I could hear the troupe working their way down the street, scaring off evil spirits and leaving good luck in their wake.

Here in Cambodia, it’s a tradition on the first days of Chinese New Year, to start the year right, to book a Chinese lion dance troupe to come perform at your business or organisation – or to call these freelance roaming troupes into your yard as they’re passing through the neighbourhood to bring some good luck, merriment and cheer into your home.

We hadn’t arranged lion dancers to come to the apartment (Pepper would have freaked), but I did make this Chinese lions head meatballs recipe for Chinese New Year, adapted from Yan-Kit’s Classic Chinese Cookbook and I’m still eating the leftovers. I’ll you more about the legendary Chinese-born, Hong Kong-raised culinary historian and cookery writer and her book, below.

I also republished a round-up of recipes for dishes for Chinese New Year and Lunar New Year that we shared last year, which includes recipes for Cambodian-Chinese spring rolls, longevity noodles, and a heavenly braised pork belly and boiled eggs dish from Vietnam, where Lunar New Year is being celebrated.

Now before I tell you more about this Chinese lions head meatballs recipe, I have a favour to ask. Grantourismo is supported by its readers. If you’ve cooked our recipes and enjoyed them, please consider supporting Grantourismo by supporting our epic Cambodian cuisine history and cookbook on Patreon, which you can do for as little as the price of a coffee.

Or you could buy us a coffee and we’ll use our coffee money to buy cooking ingredients for recipe testing; or buy a handcrafted KROK, the best mortar and pestle ever; or buy something from our Grantourismo store such as gifts for food lovers or fun reusable cloth face masks designed with Terence’s images.

Other options include using links on our site to purchase travel insurance, rent a car or campervan or motorhome, book accommodation, book a tour on Klook or Get Your Guide or buy something on Amazon, such as these cookbooks for culinary travellers, award-winning cookbooks, cookbooks by Australian chefs, classic cookbooks for serious cooks, travel books to inspire wanderlust, and gifts for Asian food lovers and picnic lovers. For any purchases, we may earn a small commission but you won’t pay extra.

Now let me tell you more about this Chinese lions head meatballs recipe.

This Chinese lions head meatballs recipe originated in Yangchow, in China’s Kiangsu Province, and is considered a classic of Huaiyang cuisine. The earliest incarnation of the dish was first created by a chef in the palace of Emperor Yang way back during the Sui Dynasty (589-618AD).

While the large meatballs are said to resemble lion’s heads and the frilly ends of Chinese cabbage their manes, Emperor Yang actually asked his chef to create a dish that reminded him of the sunflowers he’d spotted in the countryside on a journey, but that’s another story.

Lions head meatballs are a feature of Chinese New Year meals in China, in the Chinese diasporas and in Chinese communities around the world. It should be no surprise that Chinese dishes are a feature of Cambodian cuisine, just as they are in neighbouring Vietnam, Laos, Thailand, and Myanmar.

Chinese traders and emissaries have been coming to Cambodia since its first pre-Angkorian empires, and while Siem Reap doesn’t have a Chinatown as such, if it did, our neighbourhood would be the closest to it, with a Chinese temple and large Chinese school a few blocks away.

A sizeable percentage of the Cambodian population has Chinese heritage, although it takes a holiday such as Chinese New Year with its many accompany rituals and traditions to identify which neighbours are Chinese-Cambodian, and which are simply Chinese New Year enthusiasts.

Red lanterns hung up outside homes, mounds of ash from the burning of fake $100 dollar bills on the road, and low tables set up on the footpath with a feast for the ancestors of boiled chicken, bowls of oranges and bananas, cans of beer and Coca Cola, candles and incense, are all giveaways.

Chinese New Year’s Eve dinners are another. Long tables and chairs, often hired for the night and dropped off by trucks in the afternoon, are also set up on the footpaths outside homes and businesses for family, friends and staff. The tables are covered with trays of chilled beer cans  and plates of warm food, such as spring rolls, dumplings, whole fish, fried rice, and meatballs. 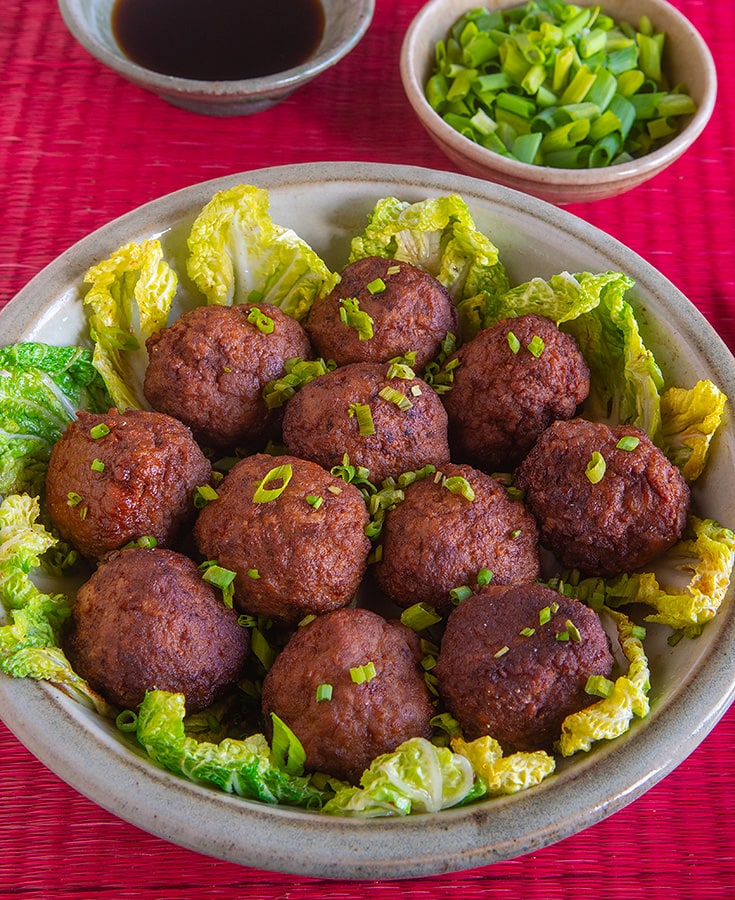 Yan-Kit So’s Chinese lions head meatballs recipe is a classic of its period. Yan-Kit So was a Chinese-born, Hong Kong-raised cookery writer and culinary historian, who had moved to London to do a PhD (on an entirely different subject) and ended up staying. She died there of cancer at age 68 in 2001.

Published in 1984, The Classic Chinese Cookbook was Yan-Kit So’s first book of a handful, and it was massively influential. It was the first Chinese cookbook that the British cookbook author, Fuschia Dunlop said she cooked from, the two writers becoming close friends, and the book is credited with changing the relationship that the British had with Chinese cuisine.

Yan-Kit So’s Chinese lions head meatballs recipe makes the most tender, melt-in-the-mouth, pork meatballs, which are first fried then braised with Chinese cabbage. The meatballs are enormous though, as they’re meant to be, but I’ve made them smaller and made a few more minor tweaks to her recipe, which I’ll explain below.

Just a few notes and tips to how to make this Chinese lion’s head meatballs recipe, as I’ve made a handful of small tweaks to Yan-Kit So’s recipe. Firstly, but importantly, let’s look at that cabbage and pork ratio.

Also, keep in mind there are also water chestnuts to go into ground pork mixture. The pork meatballs would have got lost in what would have resulted in a dense cabbage stew after 2 hours of braising 450g of cabbage, even if I’d made the huge meatballs which the recipe called for. I’m wondering if the cabbage measure is a typo.

After stirring in the minced water chestnuts (and Yan-Kit So says canned water chestnuts are just fine), she recommends dividing the pork mince mixture into four equal portions, “shaping them into thick round cakes – each a lion’s head”.

The pork mixture divided by four resulted in massive meatballs of around 120g each, which were far too big for one person to eat alone, plus I don’t have a lidded container large enough to store the leftovers in, which is why I went for what I’ve called ‘(lion) cub-sized’ meatballs. Which are still larger than the average-sized meatball weighing in at around 65g and at around 5cm in diameter.

Chinese cuisines, like Southeast Asian cuisines, are not one-dish meals, either – unless you’re eating a bowl of congee for breakfast or a plate of street food noodles for lunch – so, this dish of lion’s head meatballs served with several other dishes results in a sizeable feast with leftovers for days. 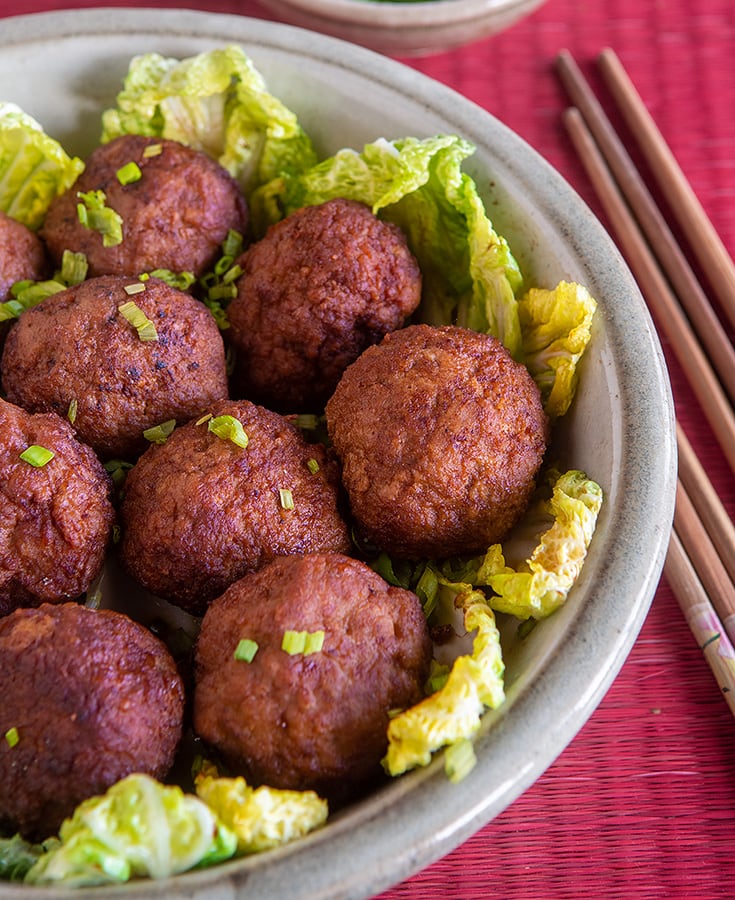 Now, if you are preparing a feast for a group of guests for Chinese New Year or another holiday, the huge meatballs might work for you, and you could double the amounts – or you could make four and slice them into quarters.

However, the firm brown exterior, which contains the soft-centre, and retains some firmness even after a couple of hours of braising, is a delight to bite into. You’d miss a lot of that with large meatballs.

Some of the older Chinese lion’s head meatball recipes I came across while researching this dish called for one cabbage leaf per meatball, with the meatball sitting on the leaf, however, Yan-Kit So covers the meatballs with the leaves, so I decided to do both. Hence the suggestion of 22 cabbage leaves for the 11 meatballs this mixture makes.

We buy Shaoxing wine from our local supermarket here – where it’s in the liquor section rather than the Chinese condiments aisle. A good specialist Asian supermarket or grocery store should have it otherwise Shaoxing wine is also on Amazon.

Yan-Kit So’s recipe calls for peanut oil or corn oil. The latest research says to avoid frying or cooking in peanut oil, which is high in polyunsaturated fats. Seed and vegetable oils, such as corn oil and soybean oil are high in Omega-6 fatty acids, which also aren’t great, but are fine in moderation.

Make sure all of those oils are kept in a cool, dark place, away from heat and light, such as in a pantry, rather than by the stove, to avoid oxidation.

Finally, Yan-Kit So’s recipe calls for the braising sauce to be thickened with potato flour mixed with water and poured over the meat before serving. I used more stock than Yan-Kit (to which I also added a little water half-way through cooking) and I ended up with a rich, thick, brown sauce after two hours of braising. There was no need to add potato starch but if your sauce doesn’t reduce as much, you may wish to add it.

Having said all that, you do what works for you. By all means, try Yan-Kit So’s original recipe with the 450 g of cabbage leaves and 450 g ground pork and the big meatballs. Yan-Kit was the Chinese cuisine expert, after all, and I’m just an enthusiast.

Please do let us know in the comments below if you make any of our Chinese lions head meatballs recipe as we’d love to know how it turns out for you.