Teulada is a tiny village and, apart from a small display of Sardinian specialties packaged for tourists in the communal market, its smattering of shops cater mainly for locals. The weekly market is on Monday morning, when a small area by the river is taken over with stalls. Our Teulada take-homes is what you can find in the markets and the shops.

The stalls at Teulada’s weekly market sell fresh fruit and vegetables, cheeses and cold cuts, kitchenware, homeware, and clothes – and even here the only thing resembling a souvenir is a kitsch Sardinian tea towel (which of course, I bought). And that’s just the way we like our towns.

That doesn’t mean there’s nothing to take home – or try while you’re here.* Indeed, both the supermarket and market boast plenty of delicious edible take-homes, local wines and spirits, and specialties such as bottarga. Here’s what we found for you for our Teulada take-homes.

A visit to the mobile delicatessen at Teulada’s Monday market is a must. The friendly owners insist you try before you buy which is an excellent strategy, because if you’re like us, you’ll buy everything you try! The pork products – the prosciuttos, hams, sausages – are all delicious, but there are a couple of standout local specialties, including prosciutto di capra (goat) and prosciutto di cinghiale (wild boar). However these will not be included in your Teulada take-homes when you leave as they can’t be taken off the island. We loved their Sardinian cheeses too, which taste very different to other Italian cheeses, due to the climate, pastures, soil, and so on. The Sardinian pecorino (sheep’s milk cheese) and the dolce sardo (mild Sardinian goat’s cheese) are delicious, as is the caciocavallo (a slightly smoky pear-shaped cheese) and Sardinian ricotta. Thankfully, we didn’t see (or taste!) the much written about casu marzu (rotten/maggot cheese), a traditional sheep’s milk cheese riddled with live insect larvae that was banned for a while. 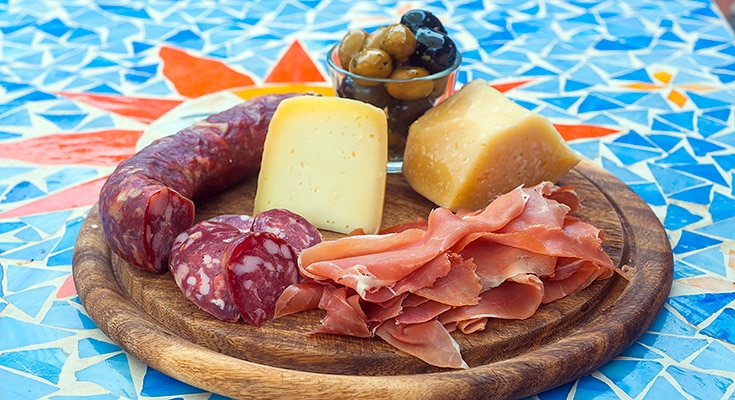 A local specialty which I fell in love with, bottarga is grey mullet roe and it’s sold either vacuum packed whole in chewy finger-like pieces (typically served sliced as a salad with tomato and mozzarella) or in a powder form, the result of it having been salted, pressed, dried, and ground, in a plastic packet much like spices are sold. The bottarga powder is typically served with spaghetti and it’s sublime. See Terence’s recipe here. 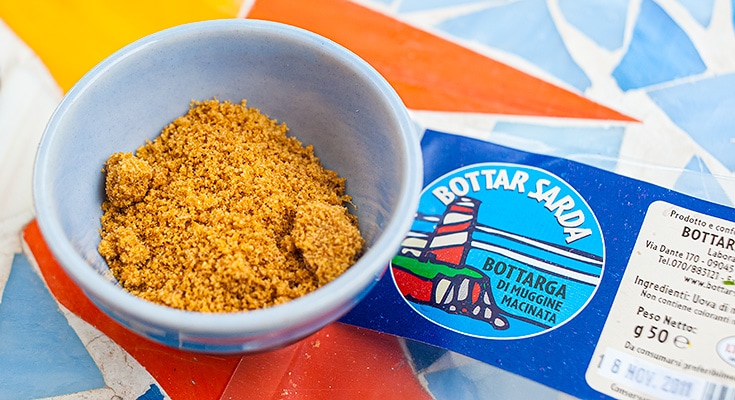 Nothing beats the flavour of Mediterranean honey and Sardinian honey is no exception. A combination of lack of pollution, the proximity of sea and country, and the abundance of herbs and flowers give Mediterranean honeys an aromatic taste and complexity you don’t find in other honeys. Sardinian honey is considered to be some of the best and they take their honey production seriously here. Apparently there are some 3,000 beekeeping families on the island and a local association that certifies the origin and authenticity of all honeys. Trees, plants, and herbs such as eucalyptus, rosemary, thyme, thistle and lavender perfume the local honeys. They match beautifully with the Sardinian cheeses. Honey is also used in biscuits and cakes instead of sugar, which is why they’re sweetness is so subtle. 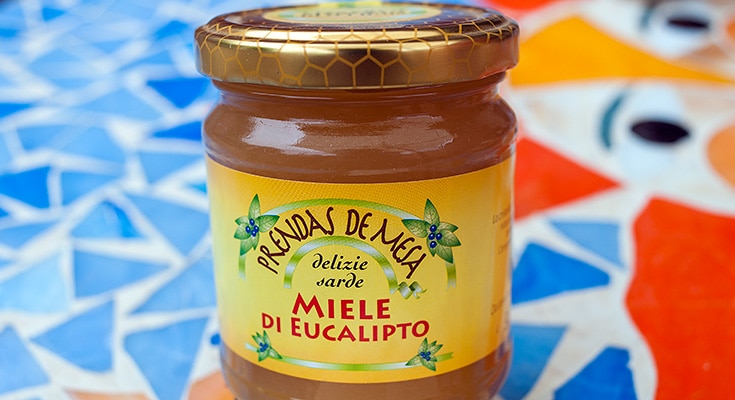 Sardinians love their biscuits (so do we!) and will often eat them instead of dessert, washed down with a sweet wine. Head to a baker or biscuit section of a supermarket and you’ll see all kinds of crunchy treats: sospiros, amarettos, tiliccas, piricchitti, and papassinos. Made from local produce – almonds, walnuts, honey, lemons, raisins and sultanas — Sardinian biscuits are often subtle in flavour, with just a hint of spice, such as anise. We liked the papassino, pictured, which is apparently the most typical Sardinian sweet. Named after ‘papassa’ or raisin, it tastes a little like gingerbread and has a soft sugar frosting sprinkled with hundreds and thousands. 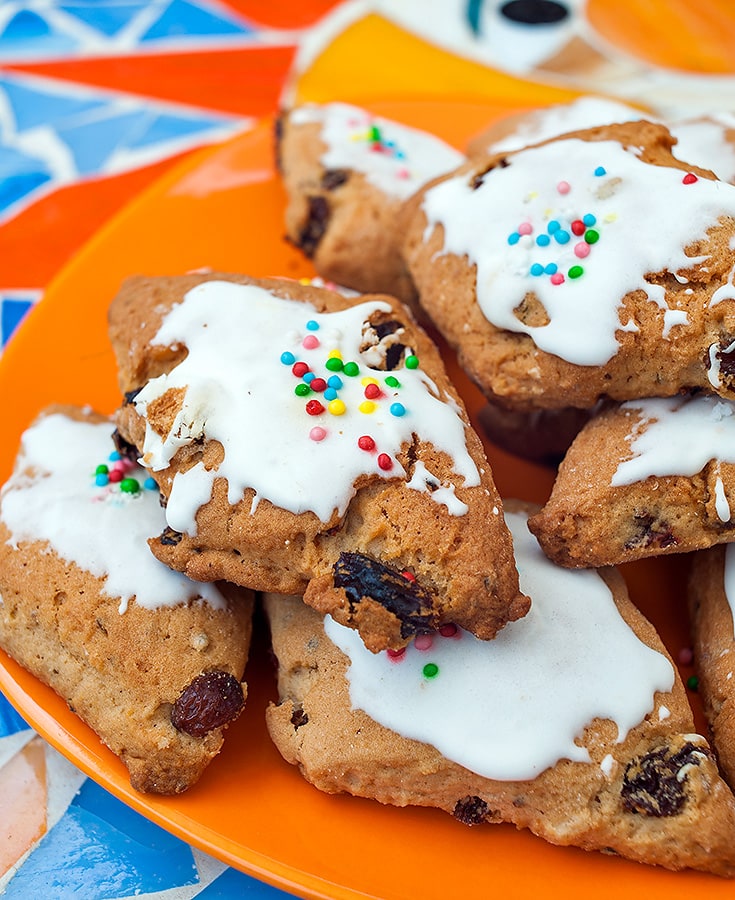 Sardinian wine may be highly regarded for its anti-aging qualities – Sardinian men out-live women (rare elsewhere) and live longer than any other men – but we’d drink it for its taste alone; longevity is an added bonus. The Phoenicians first brought grapes to the island, so they’ve been producing wine here for a very long time, and have been taking it seriously since the 19th century when the Royal Oenological School in Cagliari was set up. Sardinia is renowned for a handful of delicious grape varieties, including Vermentino, used to create a fresh aromatic white; Semidano, an ancient grape that produces white wine and sparkling wine; Nuragus, another ancient white grape; Carignano, a light red or rosé; Cannonau, Sardinia’s renowned red (and for good reason); and Moscato and Malvasia, dessert wines and sparkling wine. Some of the wines we’ve been trying from Cantina Santadi, 15km from Teulada, are some of the best Italian wines we’ve ever had. 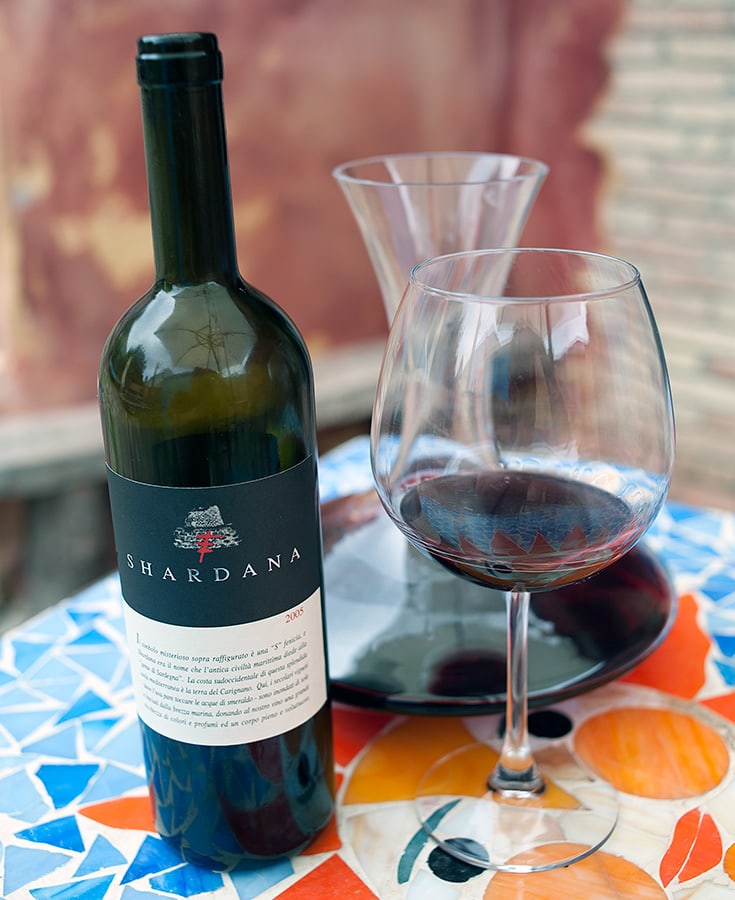 The Sardinians produce a range of unique liquors, including grappa (made from grapes), the fruit-driven arbutus, card (a favorite with shepherds), villacidro (made from saffron and anise), and a liquor made from myrtle, pictured above, the most popular of all. Produced by infusion using wild myrtle berries and leaves from the myrtle plant, with honey or blackberries added for flavour, the drink is served chilled as an aperitif or digestive. The taste is unique: aromatic, sweet and potent. 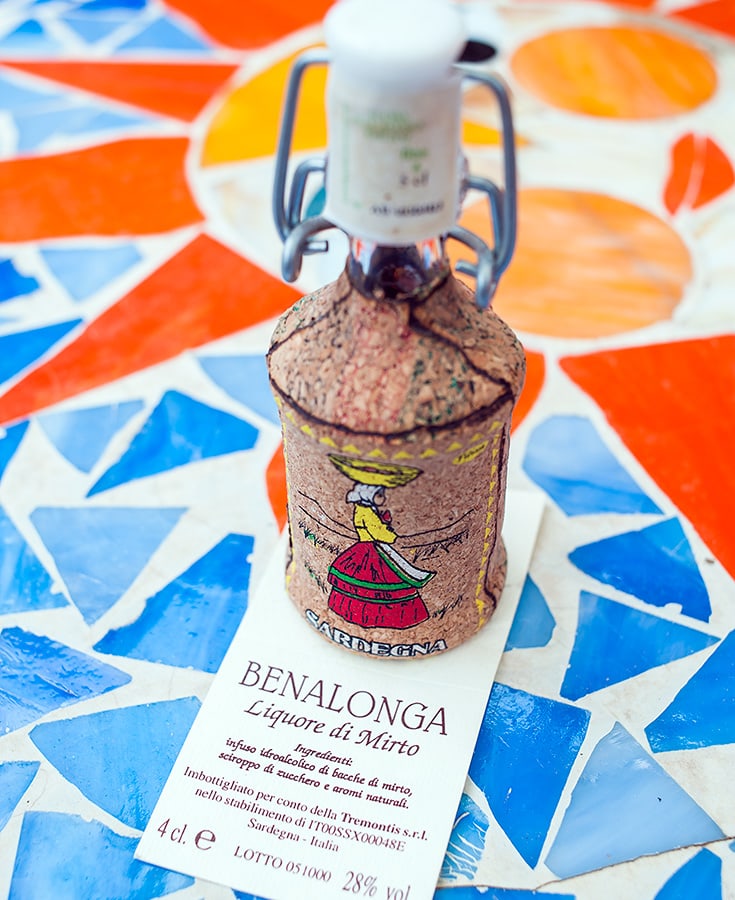 * It’s not actually possible to take Sardinian pork products off the island (hefty fines if you do) so enjoy them while you’re here.

Book the lovely holiday home we stayed in on Sardinia with our booking partner booking.com.