This slow fried egg recipe with creamy dill spread on sourdough toast with dill pickles, radishes and sweet paprika is inspired by my late grandfather’s daily breakfast – an egg, fresh crispy cucumbers and radishes picked from his veggie garden, homemade gherkins, and rye bread, all washed down with black tea with lemon – and a shot of vodka.

If you’re dropping by for the first time, Weekend Eggs is a recipe series on quintessential breakfast egg dishes from around the world, which we launched with Grantourismo back in 2010 with a year-long global grand tour focused on slow, local and experiential travel. We settled into each destination for a couple of weeks at a time, staying in apartment rentals and holiday houses to get an insight into how locals lived their lives.

In each place we stayed, we explored the local food, engaged with local cooks and chefs, and learnt to cook local specialties, which we shared in Weekend Eggs and another long-running series called The Dish, for which Terence shared the recipes of quintessential dishes he’d learnt to cook in each place.

Now before I share my slow fried eggs recipe with a creamy dill spread on toasted sourdough with dill pickles, radishes and paprika, I have a favour to ask. Grantourismo is reader-funded. If you’ve enjoyed our recipes or other content on the site, please consider supporting Grantourismo. You could buy us a coffee and we’ll use that donation to buy cooking ingredients for recipe testing or contribute to our epic original Cambodian cuisine history and cookbook on Patreon.

You could also shop our Grantourismo store on Society6 for gifts for foodies, including fun reusable cloth face masks designed with Terence’s images. Now let me tell you all about my slow fried egg recipe with creamy dill spread on sourdough toast with dill pickles, radishes and paprika.

This slow fried egg recipe with creamy dill spread on sourdough toast with dill pickles, radishes and sweet paprika is inspired by my late grandfather’s daily breakfast – an egg, fresh crispy cucumbers and radishes just picked from his veggie garden, homemade gherkins, and dark rye bread.  Sometimes, papa would have a side of raw garlic cloves, which he swore was the secret to his good health, fitness and longevity. It was all washed down with black tea with lemon – and a shot of vodka!

My grandparents, who were World War II refugees who got to start a new life in Australia in the late 1940s, are often on my mind, but never more than they have been in the last month. Every morning I wake to read the news of Putin’s war against Ukraine, and with a heavy heart I begin each day, looking for something positive to lift my mood. I inevitably turn to food, as we do, and the food of my ancestors.

My grandfather Ivan was born in the early 1900s in the Russian Empire and raised under the Soviet Union. His birthplace was once home to the ancient Scythians and Samartians and later ruled by the Greeks, Genoese and Ottoman Turks, before being incorporated into the Russian Empire. Occupied by Germans and Austrians in the early 20th century, contested by the Red Russians and White Russians during the Russian Civil War, it would be occupied in World War II by the Germans who massacred 30,000 Russians, most Russian Jews.

The city Papa most identified with and adored, where he said he had come of age as a young man, was Kiev, now Kyiv. A small Slavic settlement that paid tribute to the Turkic Khazars, then was ruled by the Vikings, who established Kievan Rus in the 9th century, it was destroyed by the Mongols, then later came under the rule of the Lithuanians, Polish, Russians, Soviets, Ukraines, Russians, then Ukraines again.

It’s no wonder my grandfather’s tales were filled with Turks, Mongols, cossacks, Tartars, “Reds and Whites”, Nazis, and partisans, of which he was one, fighting alongside comrades to defend his home until he couldn’t any longer. Exhausting walks across Europe and interminable hunger were recurring themes of the stories that papa shared around the dining table during our leisurely family meals that often lasted from midday until midnight.

Near the end of the evening papa would bring out his piano-accordion and perform a folk song or three with the enthusiasm and energy of a man forty years younger. His blue eyes sparkled, his cheeks flushed red, and his white teeth gleamed from his broad smile. Yet we knew it wouldn’t be long before he would be overcome with emotions. Tears would trickle down his cheeks and he’d pull out a handkerchief and wipe his nose, no doubt recalling painful memories of loved-ones lost to the war, including his first son.

As much as I treasure those memories, of the happy and sad times, I prefer to remember my cheery morning grandfather, the man who woke every day at the crack of dawn, no matter how late we’d all stayed up. After checking on his chickens, collecting their eggs, and inspecting his backyard veggie garden, he’d pluck whatever was ripe and ready to eat, and prepare his breakfast in the kitchen, beside baba who’d be scrambling eggs or putting on a pot of soup for lunch.

Papa would sit at the dining table with a plate of eggs, pickled gherkins, crunchy radishes and cucumbers, and perhaps a sweet ripe tomato or two, depending on the season. He’d wash it all down with a glass of lemon tea and then a shot of the homemade vodka he distilled under the house.

Finished, he’d look across to me, his cheeks glowing and eyes sparkling, then stride over and plant a big slobbery kiss on my forehead, his hand squeezing my shoulder, before he ventured out into the garden again. I’d given anything to see those blue eyes sparkle again.

Now let me share a few tips to making this slow fried egg recipe with creamy dill spread on sourdough toast with dill pickles, radishes and sweet paprika, inspired by my grandfather’s breakfast. 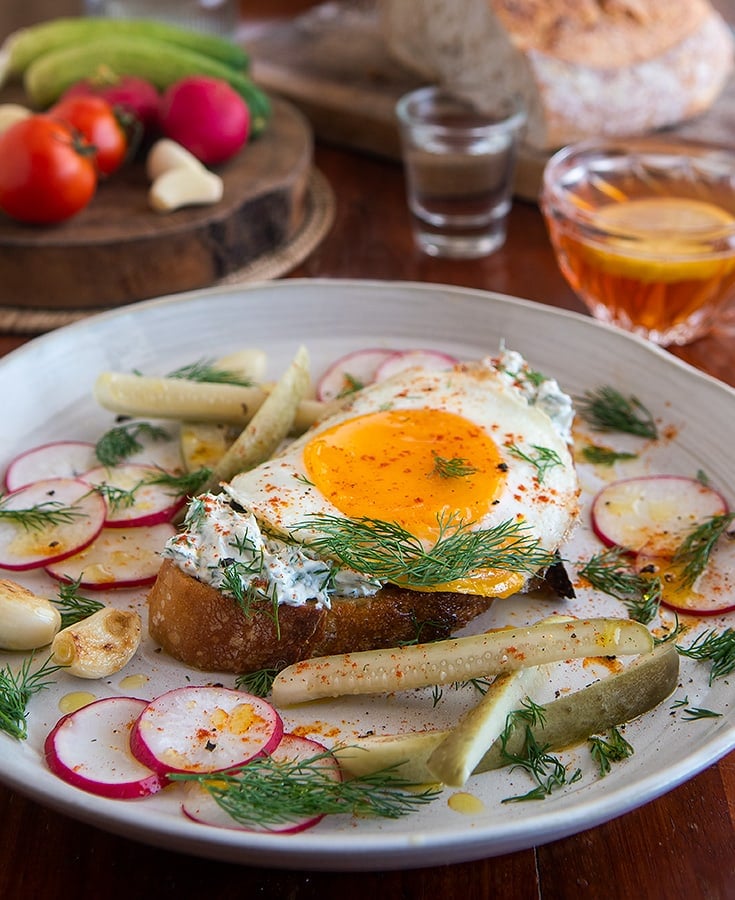 Tips to Making this Slow Fried Egg Recipe with Creamy Dill Spread on Sourdough with Pickles, Radishes and Paprika

If you don’t have any sourdough, you better start with that and see Terence’s comprehensive guide to baking sourdough. Just kidding! It’s a bit late to start now, so better pop out to your favourite bakery to buy a loaf of sourdough or your favourite bread, but I think sourdough is perfect for this.

When the sourdough is so fresh as our loaf was today – Terence pulled it out of the oven an hour before the shoot – I just lightly toast it. But I’m getting ahead of myself…

The first thing you need to do is make the dill cream cheese spread, which will take you no time at all. There’s no need to use a food processor or anything, just use a tablespoon and a small mixing bowl.

Combine the cream cheese, finely chopped fresh dill, very finely sliced scallion (or green onion or shallots depending on where you live), with sea salt and white pepper. Taste it and adjust the seasoning as you like.

Sometimes I add a teensy bit of garlic powder or onion powder but I know everyone’s not a fan. Feel free to add more dill if you’re a dill lover. I add a lot more than I’ve specified in the recipe as I’m crazy about the stuff. 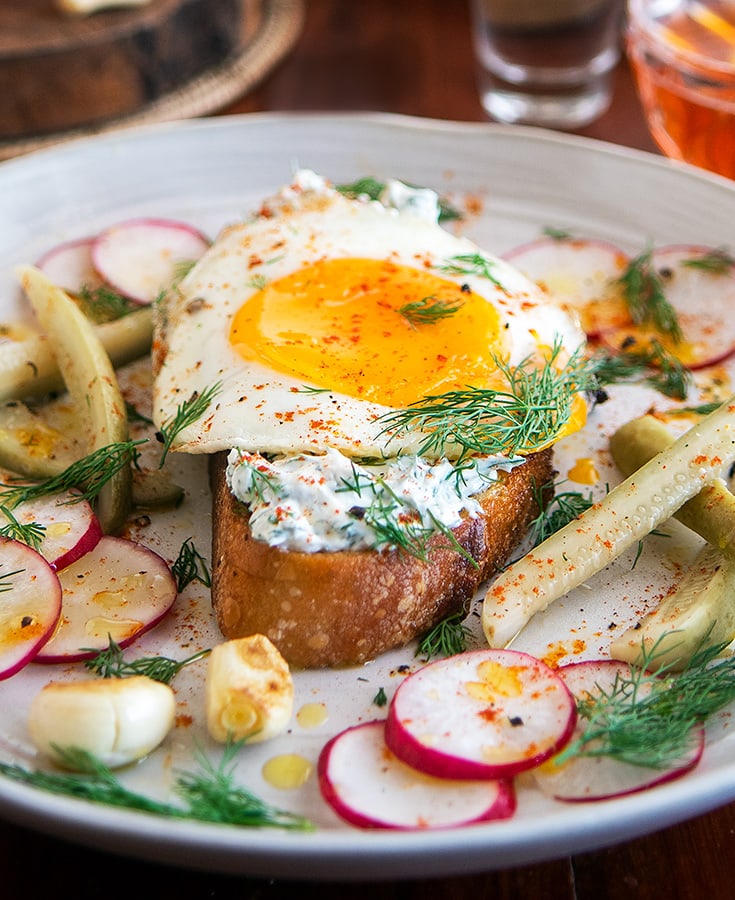 Next, pile on a generous layer of the creamy dill spread to each slice of toast. Not in the recipe, in case you don’t love dill as much as I do, but I sprinkle on even more fresh fragrant dill after that.

Top the creamy dill spread with a few fine slices of radishes (use a mandolin to slice the radish if you have one) and arrange the other slices of radishes and dill pickles on the plates. Why? Because this dish is really about the whole combination of textures and flavours, and when you’re slicing into the toast topped with the cream cheese spread and fried egg you also want to be getting a bit of this and that onto your fork.

Once you’ve prepped your plates, it’s time to make your eggs. Coat a small pan with the lightest coating of olive oil – we use these adorable little non-stick single-egg pans – then crack an egg into the pan, and slow-fry over the lowest heat for a couple of minutes until the egg is just cooked.

Some slow-fried egg recipes will baste the egg in water, so you’re essentially cooking the eggs in water. But we don’t think that’s necessary. By all means try it, but we find we can slow-fry the eggs in this little pan and the eggs cook yet the yolk and white still stay soft without the edges crisping up.

When the eggs are almost done, just make sure to turn off the heat and leave the egg to finish cooking until the yolk and white are cooked but still soft.

Then you can use a silicone spatula to slide the fried egg on top of the sourdough toast and move onto the second egg if you’re making this dish for two. The eggs cook so quickly – a couple of minutes max – so we don’t bother keeping them warm, but you could pop them under a grill/broiler if you like but keep in mind that it will keep cooking, so you may wish to cook the egg even less than recommended.

When both eggs are done and on the sourdough, sprinkle on your favourite ground paprika – I love them all, sweet and smoky, so you decide – along with sea salt and cracked black pepper to taste, and garnish with more fresh fragrant dill, and serve immediately. Enjoy!

Please do let us know in the comments below if you make our slow fried egg recipe with creamy dill spread on sourdough toast with dill pickles, radishes and sweet paprika as we’d love to know how it turns out for you.