This easy panzanella salad recipe makes the delicious Tuscan style bread and tomato salad that tastes of summer in Italy. A bread salad with onions and cucumbers before tomatoes arrived in Italy, it makes use of stale bread, the hallmark of povera cucina, the no-waste cooking of the countryside. A traditional recipe, it’s versatile – just don’t tell your Italian friends!

Some of the world’s most beautiful fresh produce is to be found in Italy – which is why some of the most delicious Italian dishes are made from just two or three ingredients: prosciutto e melon; the fresh mozzarella and tomatoes that comprise Caprese salad; and cacio e pepe, perhaps the world’s simplest pasta, made from cheese and pepper.

Of course, dishes such as these wouldn’t taste nearly as delicious as they do without a liberal dousing of quality olive oil and vinegar, a sprinkle of sea salt and cracked pepper, and handful of fresh Italian herbs with their heady perfumes, such as Genoese basil.

Because panzanella also exemplifies another Italian food tradition and that’s la cucina povera – quite literally ‘poor cooking’ or ‘poor kitchen’, which was historically ‘peasant food’ but these days is associated with the food of the Italian countryside, which is rooted in seasonality and a no-waste philosophy.

I’ll tell you more about this panzanella salad recipe in a moment. Before I do, I have a favour to ask. Grantourismo is reader-funded. If you’ve enjoyed our recipes, please consider supporting Grantourismo by supporting our original, epic, first-of-its-kind Cambodian culinary history and cookbook on Patreon for as little as US$5 a month. Or, you could buy us a coffee. Although we’ll use our coffee money to buy cooking ingredients for recipe testing.

You can also support our work by using links on the site to book accommodation, rent a car or hire a motorhome or campervan, purchase travel insurance, or book a tour on Klook or Get Your Guide; shopping our Grantourismo online store (we have fun gifts for foodies designed with Terence’s images); or buying something on Amazon, such as these award-winning cookbooks, cookbooks by Australian chefs, classic cookbooks for serious cooks, cookbooks for culinary travellers, travel books to inspire wanderlust, and gifts for Asian food lovers. Now let me tell you about this easy panzanella salad recipe.

Our panzanella salad recipe makes what’s probably Italy’s best-known salad after the Caprese salad. If you found yourself in Tuscany on your Italian travels and ordered a Caprese – which originated in Capri and the Amalfi Coast – your waiter probably would have suggested that you try a panzanella instead.

This Tuscan salad is often mistaken as a tomato salad, and while tomatoes have been a key ingredient in recent centuries, prior to the arrival of tomatoes in Italian from the Americas, the salad was made with bread, cucumbers and onions.

Panzanella is in fact a bread salad – ‘pane’ means bread and ‘zanella’ is actually the name of the dish it’s typically served in – as panzanella was born of frugality and a desire not to waste stale bread, which would be saved up until there was sufficient to make into the salad.

If the bread was too stale it would be soaked in water to bring it to life again, then the water squeezed out before the wet bread was combined with the tomatoes, cucumbers and onions, which were then drizzled in olive oil and vinegar and seasoned.

These days this seems to have become a regional or even local quirk, with some Italian cooks insisting the bread be soaked in water, while others argue that it’s enough for the stale bread to soak up the olive oil and vinegar. I like a bit of both, which I explain in my tips to making this panzanella recipe below. 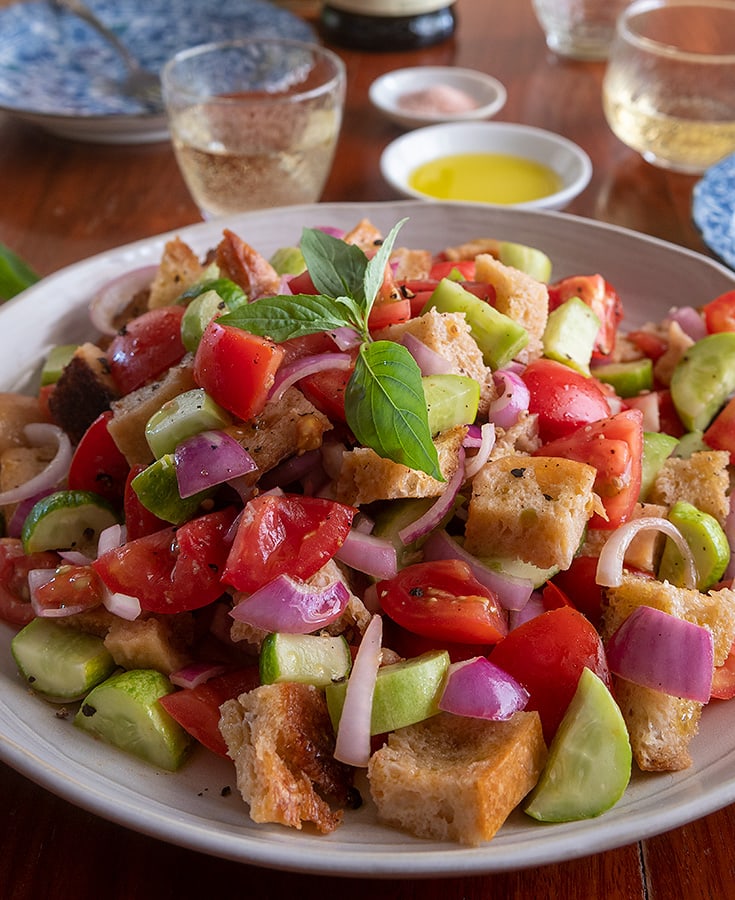 Who would have thought that such a simple salad would have so many tips?! My tips to making this panzanella salad recipe are longer than the recipe. While it’s super-easy and comes together quickly, there are some essential things you need to know if you don’t want to risk the wrath of your Italian friends.

Firstly, this panzanella does come together quickly, in around 15 minutes, however, Italian cooks recommend making panzanella at least 2-3 hours ahead of serving and letting it rest in the fridge so the bread really soaks up the olive oil and vinegar. I absolutely agree with this.

We had leftover panzanella the other evening, which I returned to the refrigerator, and it tasted even better the next day. The pieces of bread were a little softer, but still firm, and had soaked up the extra virgin olive oil and sherry vinegar so they were even more flavourful.

That means you can make this well ahead of your spring picnic, weekend lunch in the sun or alfresco summer dinner. No need to leave it until the last minute. It’s only going to get better the longer it sits and you can’t say that for many dishes.

Now as for that bread: Italians, particularly Tuscans, obviously, will argue that an authentic panzanella salad recipe calls for unsalted Tuscan bread. But unless you live in Tuscany you’re probably going to find Tuscan bread challenging to source.

Italian friends and food writers recommend ciabatta as a substitute, but while it’s a completely different style of bread, I recommend sourdough bread in this panzanella salad recipe.

Terence bakes sourdough bread every few days, so we always end up with some stale sourdough ends, and we think they’re fantastic in panzanella – which is why I thought I’d share this panzanella salad recipe in the first place.

The texture of sourdough in a salad like this is such that it stays firm-ish and doesn’t go soggy and has a delightful chewiness about it. 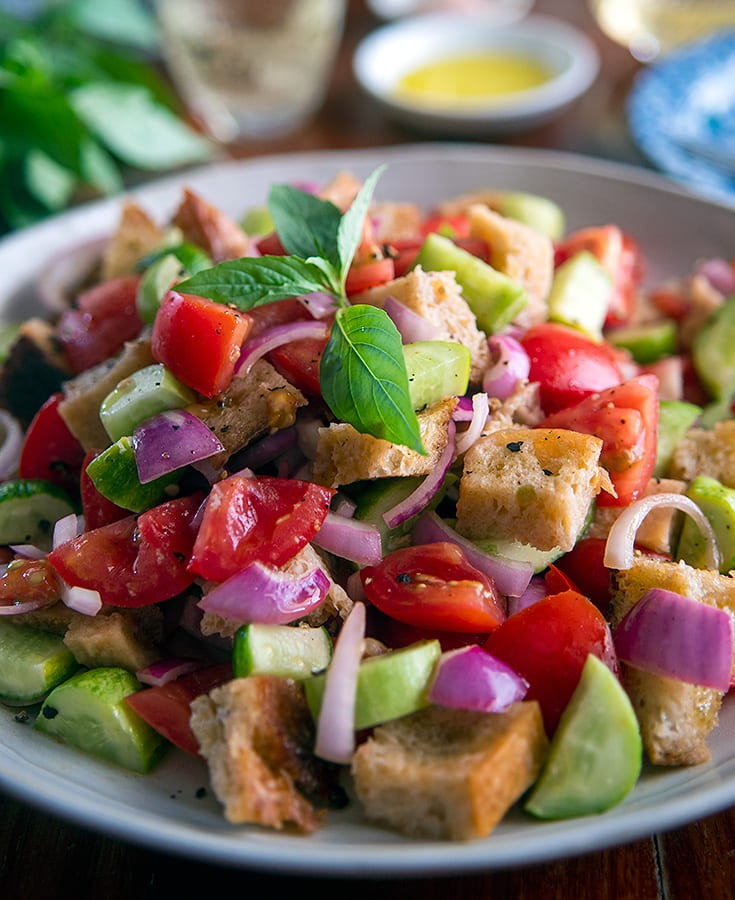 As with any cuisine, but especially Italian, always use the freshest and best quality ingredients you can afford and source. In the case of this panzanella salad recipe, of special importance are the tomatoes – make sure they’re sweet, ripe, plump tomatoes – and the extra virgin olive oil and vinegar. Red wine vinegar or sherry vinegar work better than white wine vinegar.

I’m an onion lover and wouldn’t dream of soaking onion in water to remove that bite that I love so much. For me, it’s essential to a garden salad. But I’m increasingly noticing recipes that call for doing so, so do follow that first step if you’re not such a fan – or skip it.

Unless you’re on a no-sodium diet, do spread the tomato pieces out onto a wooden chopping board or large plate and sprinkle with sea salt, then do the same with the cucumber, and let them sit for 5 minutes. Salt draws out water and enhances the flavour.

You could combine the extra virgin olive oil, red wine vinegar and seasoning in a jar first, but I just pour in the olive oil and vinegar, drizzling them evenly across the salad, then combine everything well.

We love salt as we’re so used to intense flavours after all these years living in Southeast Asia, so I still add a little more salt and pepper but you may not need it, so do taste before a final seasoning.

Lastly, fragrant basil – Italian preferably, although Italians recommend Genoese basil – is essential. I garnish with a sprig or two and provide more fresh basil on the table, so the basil doesn’t oxidise and blacken in the salad. Italian cooks recommend red wine with panzanella, but my choice is a chilled crisp dry white.

Panzanella Salad Recipe for the Tuscan Bread and Tomato Salad

Please do let us know in the comments below if you make this Italian panzanella salad recipe as we’d love to know how it turns out for you.