Many people think of Japan’s capital Tokyo as a high-tech, high-rise city and while that is true to a certain extent, it’s not the complete picture. Tokyo is also home to charming, low-rise, traditional neighbourhoods such as Yanaka and Asakusa.

But most surprisingly there are atmospheric ramshackle areas right beneath the neon-lit towers of Shinjuku, such as this tiny quarter tucked beside the railway line known as Omoide Yokocho or Memory Lane. (Note: some Japanese friends have told me that a better translation is Memory Corner despite it being typically translated as Memory Lane.) 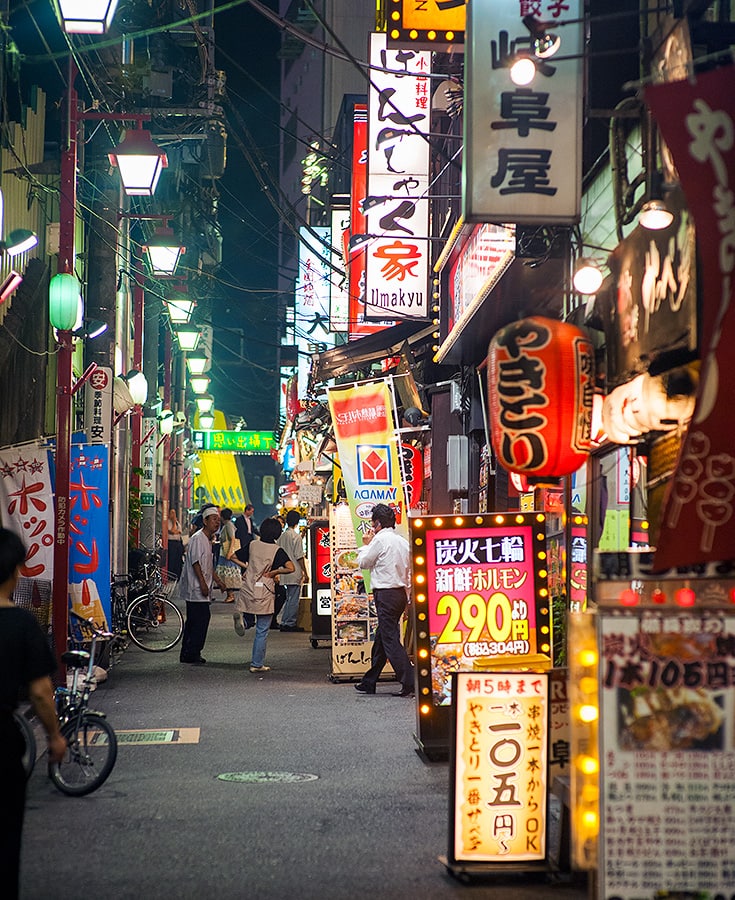 A black market area after World War II,Shinjuku’s Omoide Yokocho still oozes history and nostalgia and conveys a sense of the past increasingly being lost in the largely modern metropolis, hence the name Memory Lane.

Its skinny alleys, lined with rickety buildings are now home to dozens of smoke-filled yakitori and motsuyaki joints, simple noodle bars, and boozy izakayas that are beloved by locals for their grilled chicken skewers, big bowls of soups, and wok-fried noodles cooked over open fires. 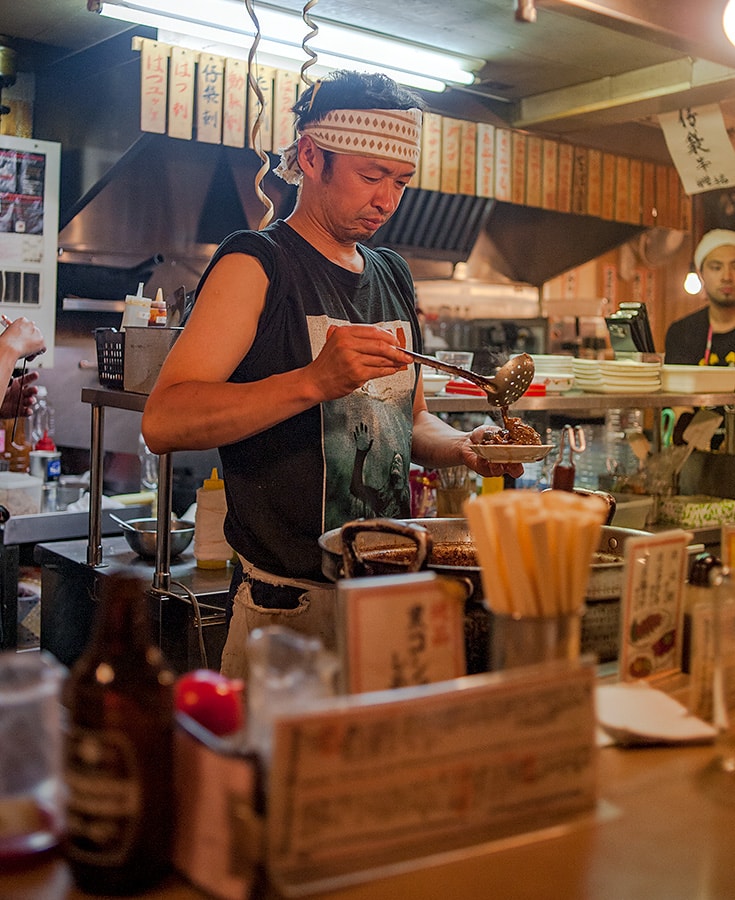 Ironically, the very thing that makes the eateries of Omoide Yokocho so popular with regulars – cheap food cooked over charcoal and flames – is what also makes the precinct a hazard.

Indeed much of the ‘old’ Shinjuku neighbourhood of Omoide Yokocho was actually rebuilt in 1999 after fire raged through the dilapidated wooden structures.

A complete demolition of Omoide Yokocho has long been talked about, but fortunately these little eat streets still thrive.

Night after night, Japanese salarymen and -women (office workers), briefcases in hand and suit coats folded neatly over their arms, squeeze into the crowded bars. They perch on tiny stools at tiny counters to line their stomachs pre-drinks or soak up the alcohol post-drinking session with this fantastically affordable fast food. 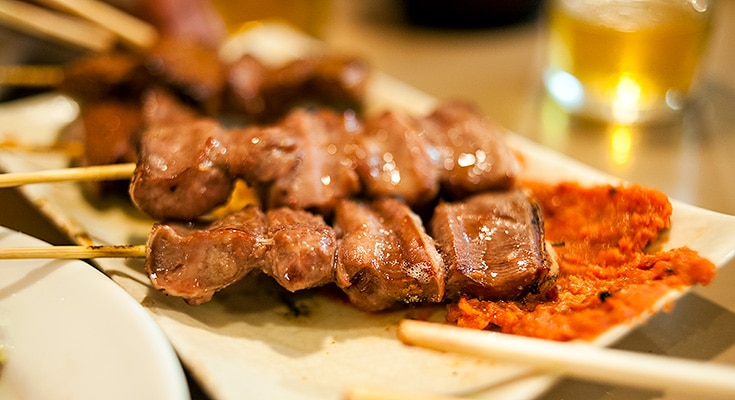 Omoide Yokocho is also known as Shonben Yokocho or Piss Alley or Piss Lane, a name gained from its lack of toilet facilities. While there are toilets here now, it’s a small concession to the atmosphere of the quarter.

While Omoide Yokocho may not be the best spot to go on your first night in Tokyo if you’re not with a Japanese speaker – there are no menus in English and few staff speak English – we managed to make friends and get by very nicely with lots of pointing and a little help from our new mates. 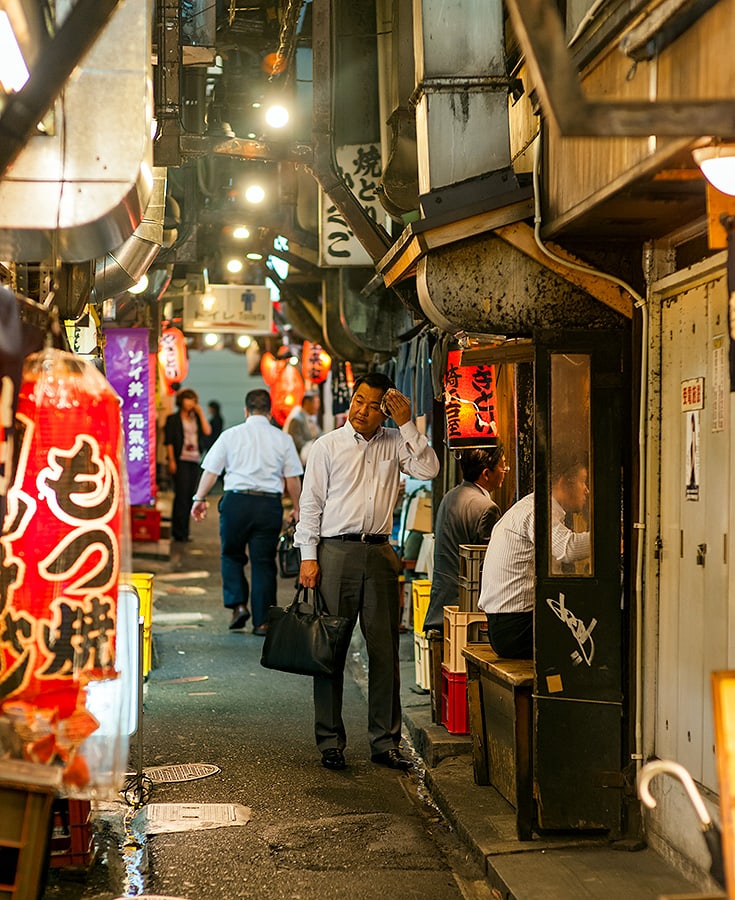 Note that Omoide Yokocho is also not a good place to go in a group larger than three or four as you’ll find it difficult enough to get seats for two in some of the tiniest eateries, which tend to be the most interesting.

Having said that, Shinjuku’s Memory Lane quickly became one of our favourite places in Tokyo, and a place we returned to again and again – a special place that we think should be preserved at all costs.

When you go, whatever you eat, here’s a guide: be sure to have a shot of shochu with soda and lemon, called a chuhai, and toast “kampai!” to your new local friends as well as to an area in the heart of Shinjuku that still oozes plenty of post-war Tokyo charm. 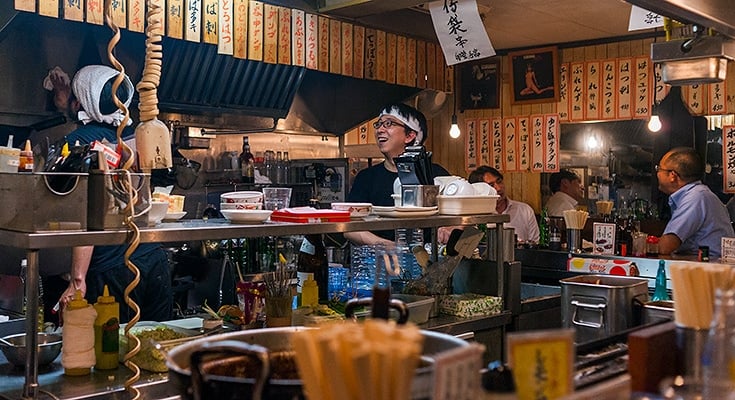 Illustrated Salaryman in Japan by the Japan Travel Bureau

Tokyo, A Biography: Disasters, Destruction and Renewal, The Story of an Indomitable City by Stephen Mansfield

Tokyo from Edo to Showa 1867-1989: The Emergence of the World’s Greatest City by Edward Seidensticker

Tokyo, 29 Walks in the World’s Most Exciting City by John H. Martin and Phyllis G. Martin (features a section on Shinjuku walks)