Mexico City Zocalo, the central square, is in many ways the true pulsating heart of Mexico‘s capital city. Go there any time of the day or night and you’re guaranteed to be entertained. But don’t be surprised if you find yourself wanting to return again and again.

The sprawling Mexico City Zocalo was established on what was the Nahua city of Tenochtitlan and has been Mexico City’s main square since 1813 when it became the Plaza de la Constitución. It’s more commonly known as ‘the Zócalo’, meaning ‘base’, and for many it becomes the focal point of their Mexico City stay. 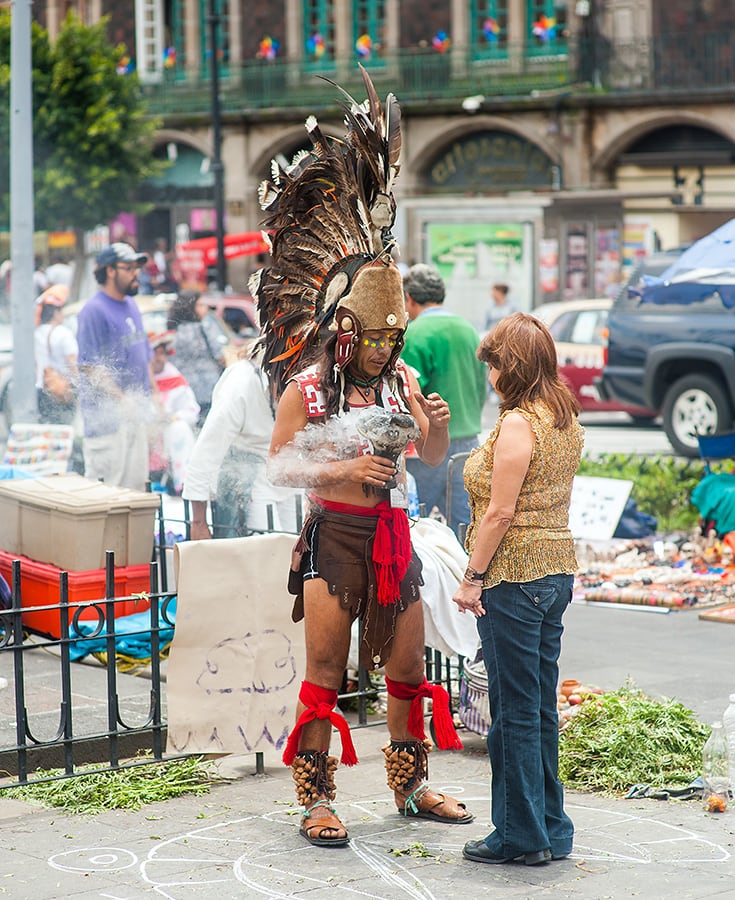 The first stop for many visitors to Mexico City, the Zócalo is home to several of the city’s star attractions, including the Metropolitan Cathedral, the largest cathedral in the Americas; the National Palace with its marvellous Diego Rivera ‘History of Mexico’ murals; and the Templo Mayor museum and Aztec archaeological site.

Naturally, the Mexico City Zocalo was the first place we headed after checking into our Mexico City apartment rental but not for the Cathedral or museums, which we’d visited on previous trips. This time we were heading to the Zócalo simply to soak up the atmosphere. We recommend you do the same.

A warning: the pull of Mexico City’s Zocalo is so magnetic that you’ll find yourself returning again and again. 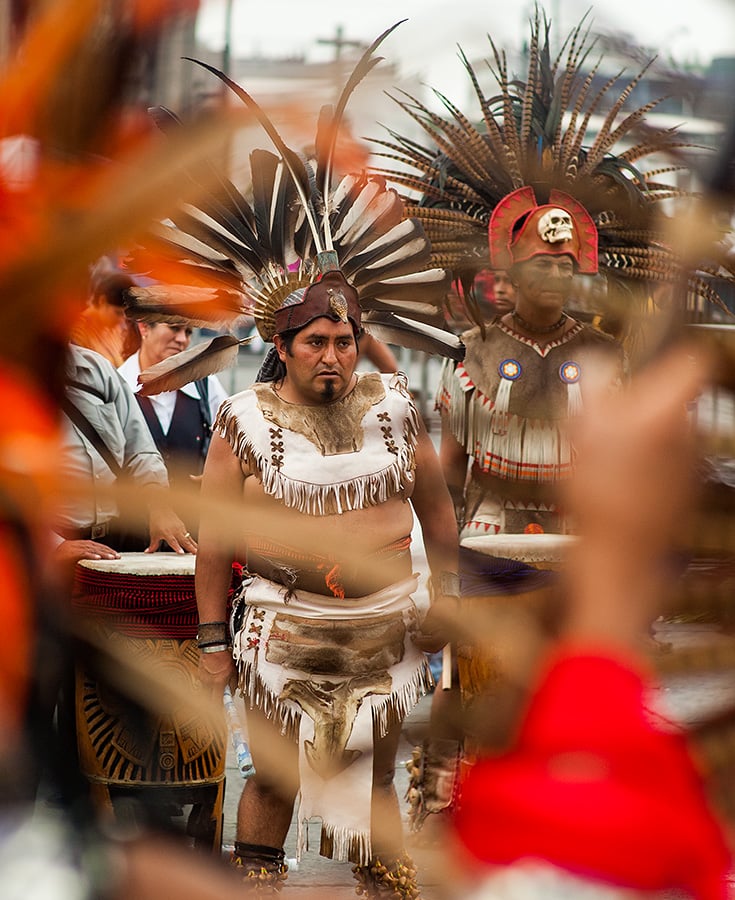 On our first day in Mexico City we decided to check out one of our once-favourite places for a drink, the rooftop bar of the Majestic Hotel (now, unfortunately, a Best Western). The grand building boasts spectacular vistas of the Mexico City Zocalo so we chose to block out negative reviews from family and friends who had more recently been there and head up purely for the birds-eye-views of the square.

As expected, the food was bland (always the way with gringo-friendly establishments), the guacamole wasn’t as fresh as we remembered it, and the Margaritas tasted like watery lime cordial with little kick. If you do go, and you should do so just for the vistas, order a cerveza and queso fundido. But what didn’t disappoint were the jaw-dropping views of the Mexico City Zocalo and the action on the square.

On the colossal stage in front of the Cathedral, a local heavy metal band was throwing shapes so clichéd of the genre that you could probably tell what kind of music it was even with the massive speakers unplugged. A small crowd threw the devil’s horns while the singer growled Cookie Monster-style in Spanish. Unplugging the speakers might have been a good idea.

On Monte de Piadad, the street immediately below the hotel, a sprawling demonstration by the International Transport Workers’ Federation was making its way towards the south-eastern side of the square where a temporary stage had been constructed for them. As they marched, the sounds of their Socialist slogans mixed with an official’s dry delivery of a speech celebrating International Youth Day from another area of the square. 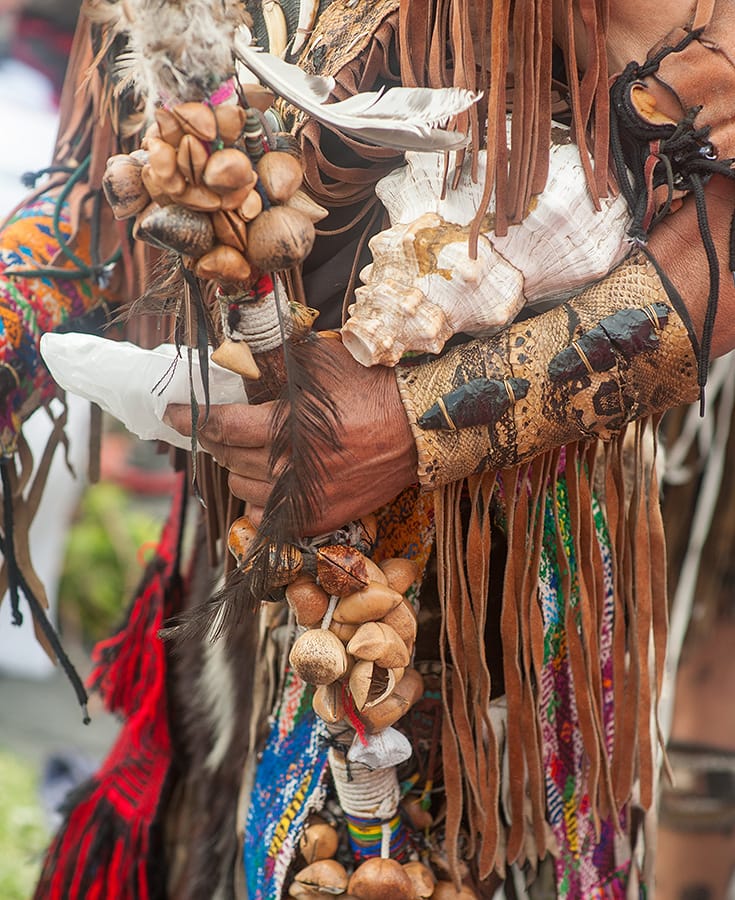 We gave up our ringside seats to go down to the plaza and get amongst the action. At the centre of the square, guys dressed up in medieval-like costumes play-fought while in a boxing ring a display of Muay Thai (Thai kickboxing) was underway. Elsewhere there was a basketball game, skateboarding, juggling, and the obligatory costumed-people on stilts with painted faces.

Indigenous Mexicans dressed up as the Aztecs warriors who used to reside in the city that was once beneath the square, performed ritualistic ceremonies and dances in between posing for photographs, while Mexican tourists walked around eating blue corn tostadas and being ‘cleansed’ by the Aztecs as part of traditional healing ceremonies. Local punks, not so keen on being cleansed, slam-danced to the heavy metal sounds.

This being the Mexico City Zocalo, there is always something unexpected happening here. It wasn’t just the strident Aussie accent, extolling the virtues of unions, that reverberated around the square. Perhaps the most bizarre sight of the afternoon was a semi-naked girl adorned only in blue paint, a tiny g-string and high heels, accompanied by a rather reluctant beefy young man in a pair of spandex shorts, sporting a similar paint job. 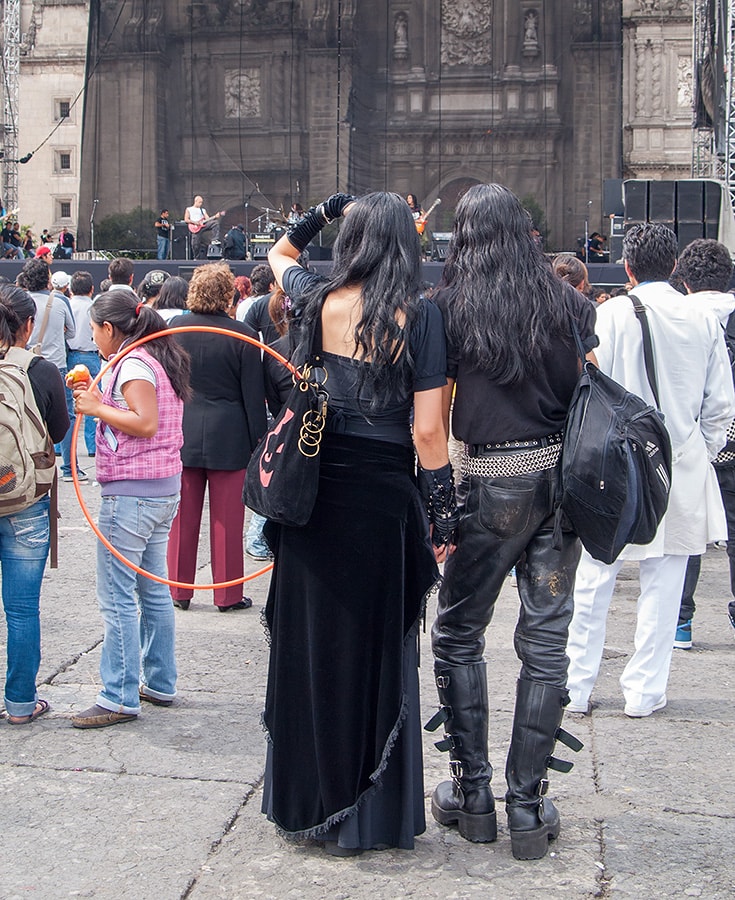 They posed for a few photographs before the girl realized that the young men gripping their camera-phones with sweaty palms were getting a little too excited at the sight of her painted breasts. She wobbled off the square on her heels leaving us to ponder the point of the exercise.

As befuddled as we may have been by the blue girl, there was no doubt in our minds as to which is the world’s liveliest (and our favourite) square.

Where to Stay on the Mexico City Zocalo

There are just three hotels overlooking the Mexico City Zocalo with gob-smacking views of the sprawling square. While the location is unbeatable, all three hotels are historic and badly in need of renovation – but who really cares with those views!

Overlooking the National Palace, the 5-star Gran Hotel Ciudad de México, is for many the choice accommodation on the Zocalo. Built in 1899 as one of Mexico City’s first department stores, its elegant Art Nouveau style was modelled on the fashionable shopping arcades in Paris. While the hotel has been renovated over the years, the original grand staircase, gilded caged elevators and gob-smacking stained-glass ceiling remain. The 60 light-filled rooms and suites have marble bathrooms and are furnished with antiques, some with four-poster beds. The best is the 45m² Master Suite with City Views, which boast magnificent vistas of the Zócalo, while the Deluxe Kings also offer stunning vistas. The most breathtaking vantage point, of course, is from the fifth floor restaurant and bar. When you book via Booking.com put in a request for a room with balcony.
16 de Septiembre 82, Centro Histórico, Mexico City, Mexico

While it may not be as elegant as its neighbour, above, and rooms are rather plain, the 4-star Hotel Majestic is the better pick if you’re all about the views. Once considered one of the city’s most luxurious hotels when we first visited Mexico City in the Nineties, it still has some charm, if only in its public spaces. Terracotta tiles on the floors, traditional ceramic Mexican talavera tiles decorating the tangerine walls, and antique wooden chairs in the restaurant remind you that you are indeed in Mexico. But then you look outside! Wow. Who cares what the rooms look like when they have floor to ceiling French doors and small balconies offering sweeping vistas of the Zocalo. While the 2-room Suites are the largest rooms and have two balconies, some of the King Rooms also have balconies and panoramic views. Rooms 608 and 408 are the picks.
Avenida Madero 73, Centro Histórico, Mexico City, Mexico

Located next to the Metropolitan Cathedral on the corner of the Zócalo, the 4-star Hotel Zócalo Central has Junior Suites with City Views that look onto the magnificent church opposite and the marvellous square. For the best vantage point, head up to El Balcon del Zocalo, the hotel’s sixth floor alfresco restaurant, which offers spectacular vistas of the cathedral rooftop and steeples that seem close enough to reach out and touch. Note that while the building dates to the 1890s, and the exterior is neo-classical, the interior is modern with rooms oddly decorated in country-style furniture, with striped sofas and polished blonde-wood floorboards. Once again, though, you’re here for the views.
Avenida 5 de Mayo 61, Centro Historico, Mexico City, Mexico