When we asked for suggestions as to who would be the best chef in Edinburgh to talk to about new Scottish cuisine and local produce one name kept popping up – Tom Kitchin.

Tom runs his Michelin-starred restaurant, The Kitchin, in waterside Leith with his wife, Michaela, and he has an enviable resume. Tom cooked at Pierre Koffmann’s restaurant La Tante Claire in London as a teenager, then worked with Guy Savoy at Restaurant Guy Savoy in Paris, followed by a stint at Alain Ducasse at the Louis XV in Monte Carlo.

All of these three restaurants had something in common besides having three Michelin stars – they had chefs with strong opinions on what is the right way to do things. 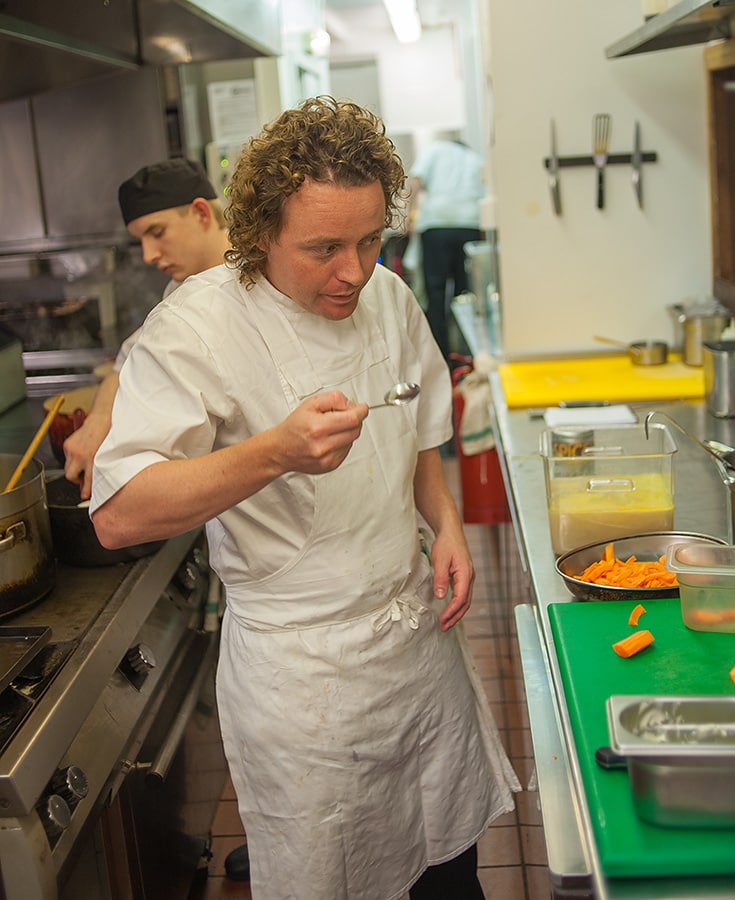 When we visited Tom’s sleek restaurant in a rather anodyne section of Leith’s waterfront, Tom and his team had just returned from a winter break. However, looking through the window into the kitchen, it was all business.

A couple of young women and several young men appeared aware of the career opportunities that working for someone like Tom Kitchin affords – he received his first Michelin star within one year of opening his restaurant.

At the end of service they cleaned the kitchen with a zeal I’ve not seen in too many restaurants and an hour later they were back prepping for dinner service as the front of house staff tried to handle the constant calls for bookings.

All of Scotland appeared to know that the winter break for the restaurant was over and tables were filling fast. There is several month’s wait for a Saturday night reservation. 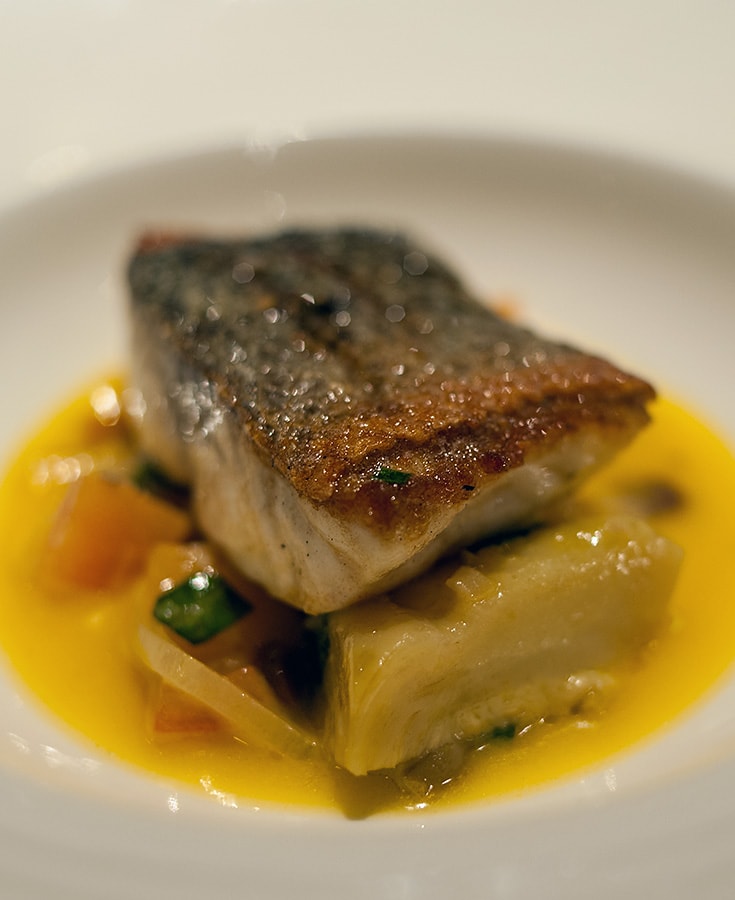 We settled in for lunch and ate a fantastic Land and Sea Surprise Tasting Menu, seven courses ranging from local seafood to game – allowing me to tweet things I never imagined, like: “Pig’s head & langoustine tail. Crispy ear salad. No, really.”

While ‘nose to tail’ eating is gaining popularity around the globe, The Kitchin makes an even more persuasive argument that the often-discarded bits of animals can be delicious than, say, a restaurant like St. John in London.

Many think that the kind of three-star cooking that Tom learnt to do is all about truffles, lobster and fois gras, but when we sit down for a chat after lunch, Tom tells us that Pierre Koffmann’s regional French cooking was most influential for him.

“Koffmann is really about nose to tail cooking and he and his books really inspired me,” Tom revealed.

We discussed how Marco Pierre White’s interpretation of Koffmann’s braised pigs trotters was such a landmark dish and how his attitude in the kitchen was an inspiration to younger chefs. 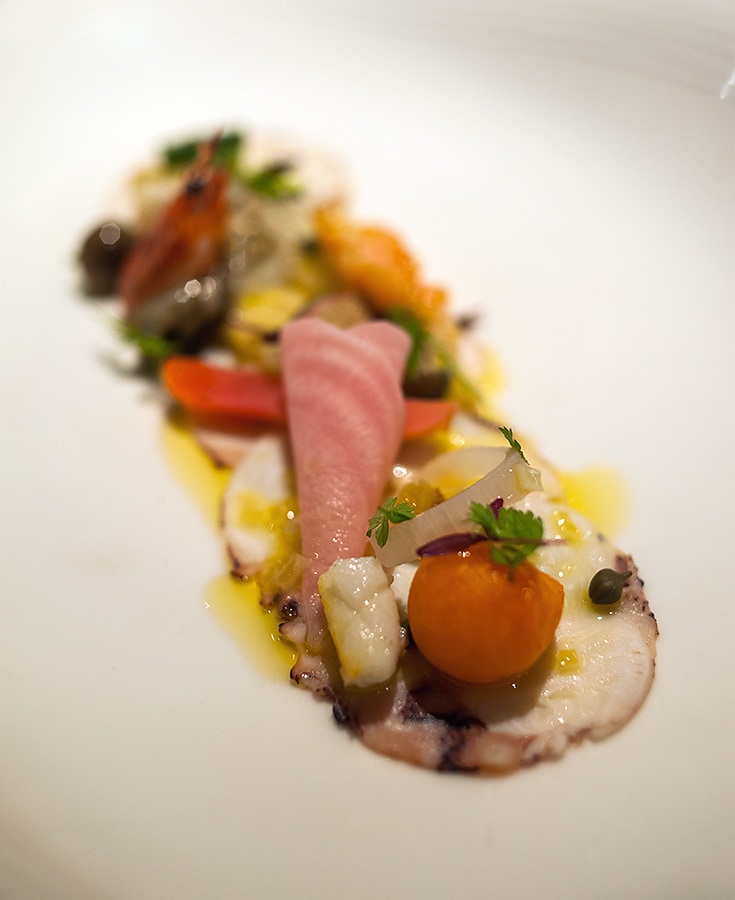 “Well, he was the first chef to be a rock star,” Tom admitted. “That was good, it was good for everyone.”

We talked about Tom’s love of seasonality and his motto ‘From Nature to Plate’. It was in France, he explained, where he really learned about seasonality.

“Working at Ducasse in Monaco, I would see Chef Franck Cerutti (Ducasse’s executive chef) go and buy different things from the markets on particular days,” Tom said. “He’d go and buy gamberoni (jumbo prawns) over the border in Italy. It was a great learning experience.”

Discussing the local food scene, I tell Tom how impressed we are with the local Scottish produce and Edingburh’s specialty shops. 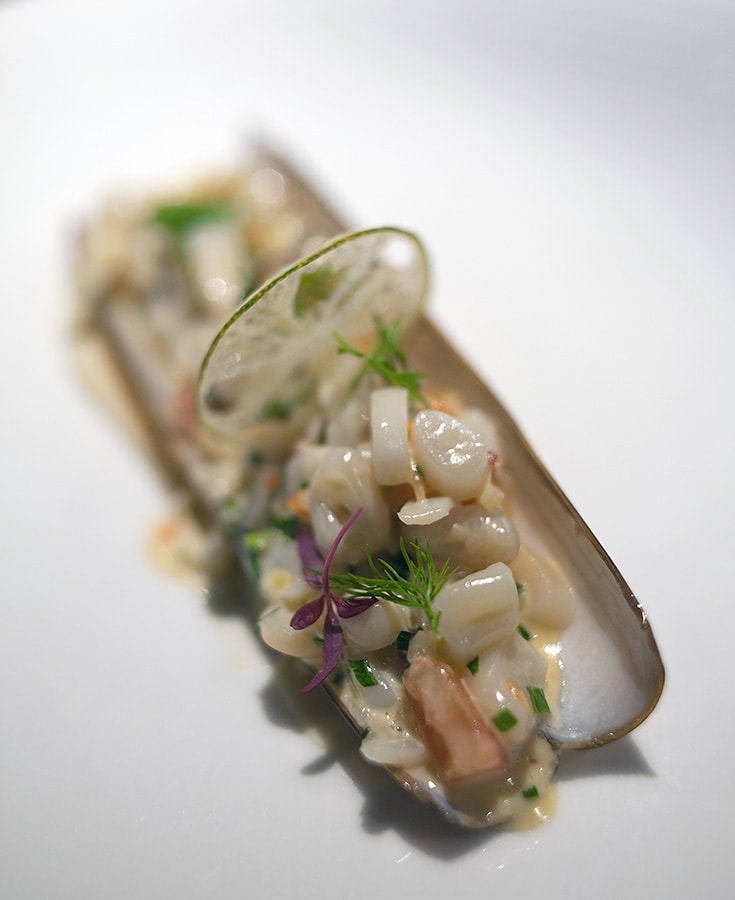 “In terms of Edinburgh, I always knew the larder was here,” Tom said. “On the first day of the shooting season, on 12 August, we drive to the borders where my man shoots the first grouse of the season, and we pluck it and serve it in the restaurant that night. We go to the West Coast of Scotland for our langoustines, where you can see them coming in.”

“We’re not 100% local, and I don’t pretend we are,” the chef said. “I buy tomatoes from Italy and France if I have to. But the key ingredients are all local. I try to use as many local ingredients as I can. I think the seafood in Scotland is just wonderful.”

“Scotland’s heritage cuisine is also wonderful,” Tom told me. “Cheap ingredients can actually have more flavour and show off the skills of the chef. That’s something I learnt from Pierre Koffman… I still speak to him 3–4 times a week.” 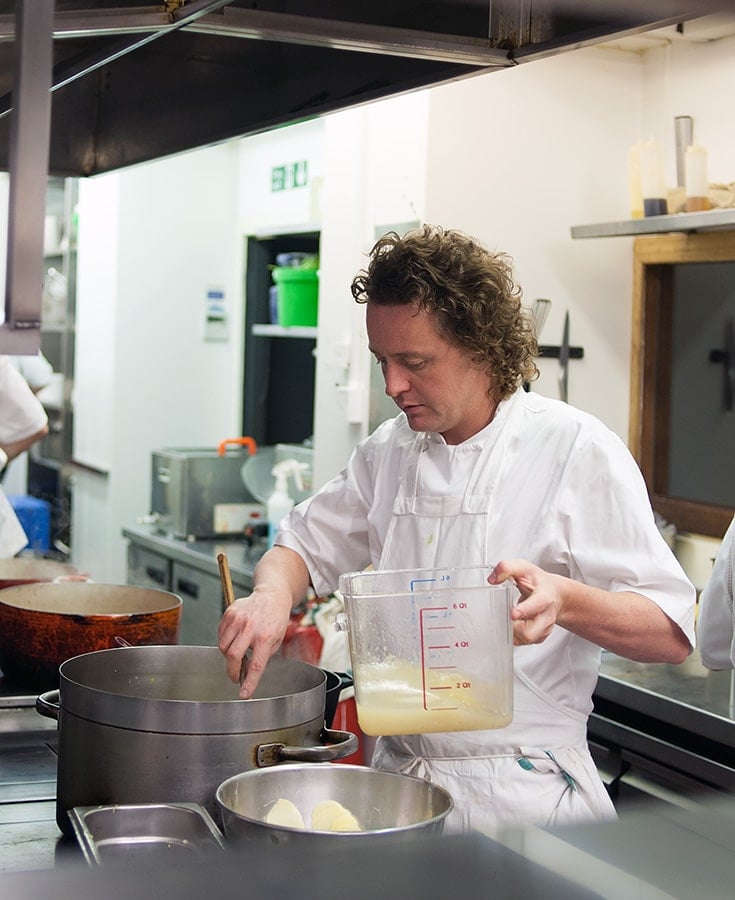 I asked Tom about the dichotomy that exists in Scotland when it comes to cuisine – so much fantastic fresh produce and yet most people think Scottish cuisine is all about deep-fried Mars bars.

“There was an image about Scottish cuisine that everything was going in the fryer for a while there,” the Chef admitted. “But it’s changing. Now we’ve got really great pubs, good sandwich bars, Michelin-starred restaurants, wonderful fish and chips… we’re changing.”

Over the previous couple of weeks in Edinburgh we’d noticed that small suppliers have started selling their produce to the large chains such as Waitrose. To the consumer this looks like a good thing.

“I work with local suppliers, but as much romance as there is in that – chefs working closely with suppliers – you can’t blame the guys who want to sell their produce to the big suppliers. The supermarkets are powerful,” Tom said. “I’m a bit cynical about Waitrose’s marketing, but the supermarket is better than a lot of them.”

On or off duty, it’s all about the produce. One of Tom’s joys is getting away with Michaela for some foraging.

“I love wild ingredients. On a Sunday and Monday we’ll often escape to the countryside and make a day of it, mushroom or berry-picking. It’s because of my training,” he said. “The ingredients are the memory that you take away from a meal.”