This eggs potatoes and chorizo breakfast skillet recipe makes our favourite take on the classic American country skillet breakfast made in a cast iron skillet that’s also called a cowboy skillet breakfast or farmer’s skillet breakfast. Instead of bacon or ham, we make this hearty breakfast with spicy chorizo sausage and specifically soft Mexican-style chorizo.

Volcanic eruptions, tsunamis, sonic booms, and Omicron spreading like wildlife around the world. It’s not surprising that we’re all seeking food that comforts right now, in the form of warming soups, hearty stews, spicy curries, filling pastas, and big country breakfasts, such as this eggs potatoes and chorizo breakfast skillet, our first Weekend Eggs recipe for 2022.

If you’re visiting us for the first time, we launched Weekend Eggs back in 2010 when we launched Grantourismo with a yearlong global grand tour aimed at promoting slow, local and experiential travel. We spent two weeks in each destination, staying in apartment rentals and holiday homes to get an insight into how locals lived their lives.

In each place we settled into, we explored the local food, connected with local cooks and chefs, and learnt to cook local specialties, which we shared in a series called The Dish, for which Terence learnt to cook a quintessential dish of each place, and our Weekend Eggs series, which we rebooted early last year.

Before I tell you about this eggs potatoes and chorizo breakfast skillet recipe, we have a favour to ask. Grantourismo is reader-funded. If you’ve enjoyed our recipes or other content on the site, please consider supporting Grantourismo. You could buy us a coffee and we’ll use that donation to buy cooking ingredients for recipe testing or contribute to our epic original Cambodian cuisine history and cookbook on Patreon.

You could also shop our Grantourismo store on Society6 for gifts for foodies, including fun reusable cloth face masks designed with Terence’s images. Now let’s tell you about this eggs potatoes and chorizo breakfast skillet recipe.

Although there’s an infinite array of variations on the traditional breakfast skillet recipe – additions include anything from bell peppers to kidney beans – the essential ingredients of the classic skillet breakfast are eggs, potatoes, onions, cheese, and bacon or ham.

We prefer to make this hearty American breakfast with spicy chorizo sausage instead of bacon and ham, and specifically the Mexican-style soft chorizo sausage rather than the harder Spanish-style chorizo. 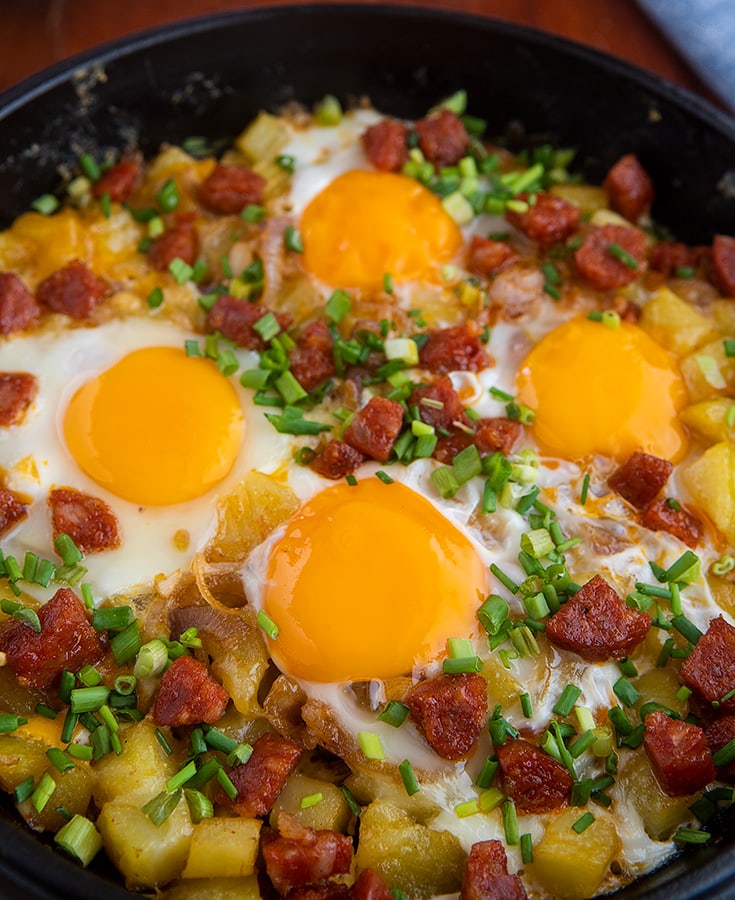 This eggs potatoes and chorizo breakfast skillet recipe has its origins in the hearty ‘cowboy skillet breakfasts’ of the ‘Old West’ and American frontier on the cattle herding trails of the 1860s, when cowboys needed a big filling breakfast to sustain them through the day.

Breakfast was baked in enormous cast iron pots over an open fire and typically consisted of big pots of spicy beans and biscuits doused in gravy – ‘biscuits’ being something more akin to what Australians, New Zealanders and British call ‘scones’, rather than what we call ‘biscuits’, which are ‘cookies’ to our American readers.

The cowboy breakfast typically featured beans, maize, chillies, and other indigenous ingredients and specialties of the Mexican cowboys and the Mexican cooks who operated the mobile kitchens or ‘chuck wagons’ that were a key fixture on the often weeks- and even months-long cattle drives.

These included pan de campo or country bread, which was cooked on the skillet, and the ‘son of a gun stew’, made with offally bits such as liver, tripe and heart, which was essentially Mexican menudo.

Just a few tips from Terence on how to make this eggs potatoes and chorizo breakfast skillet recipe. 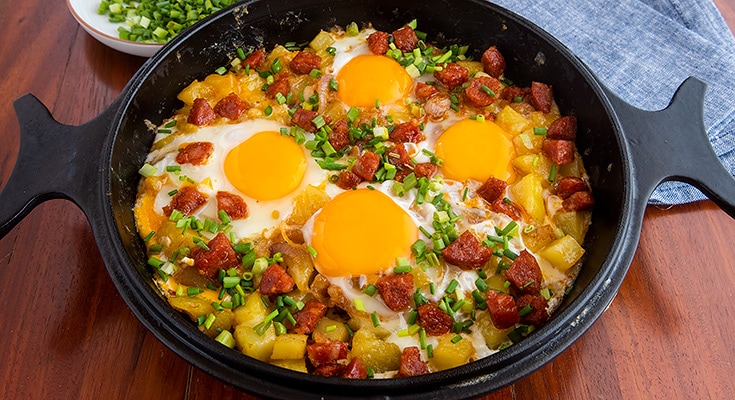 I only have a few tips to making this eggs potatoes and chorizo breakfast skillet recipe. My best tip is to use a 25cm (10″) cast iron skillet. A cast iron skillet heats evenly and is also oven safe, which is important, as we need to melt the cheese under a grill.

The potatoes need to be cooked enough so that a skewer meets a little resistance when testing the potatoes, but the potatoes must remain firm enough to stay in one piece when diced.

I like to cook the potatoes skin on, let them cool down, peel them, and put them in the fridge overnight to firm up more.

Like our other chorizo breakfast dishes, you want to use the soft Mexican chorizo, which has to be cooked before eating. The firm Spanish-style chorizo can also be used, but take care not to over-cook it as it tends to go hard.

Monterey Jack cheese is a must, otherwise a young cheddar cheese will work. For the hot sauce, our current favourites are Tapatio Salsa Picante and Cholula Original Hot Sauce.

Please do let us know in the comments below if you cook our egg potatoes and chorizo breakfast skillet recipe as we’d love to know how it turns out for you.