Dunkeld and The Grampians Guide – Where to Stay, Walk, Eat, Drink and Taste

This Dunkeld and The Grampians guide covers everything from where to stay, walk and explore to what to do, eat and drink, and also includes a concise itinerary. While it was the food of Chef Dan Hunter at Royal Mail Hotel that first took us to Dunkeld, it was the Grampians region that would have held us if we’d had more time to explore.

Note: this Dunkeld and The Grampians guide was partly updated in 2013 after Chef Dan Hunter left the Royal Mail to open his own restaurant called Brae in the beautiful Otways on the southwest coast of Victoria. We’ll give it a more thorough update on our next trip back to Australia.

Dunkeld and The Grampians make a great escape from Melbourne and are easily worth a few days of your time. We’d been trying to experience the Royal Mail restaurant since 2009 when we were working on the DK Backroads Australia book and Rough Guide to Australia, and were kicking ourselves that our tight schedule didn’t allow us to that trip.

This time, we made sure we didn’t miss out on a meal at the Royal here — and you should ensure you don’t either. With Dan Hunter at the helm, the Royal Mail could just become Australia’s El Bulli. And with the majestic mountain range of the Grampians in the restaurant’s backyard, there’s reason to stay on and explore the surrounding region. 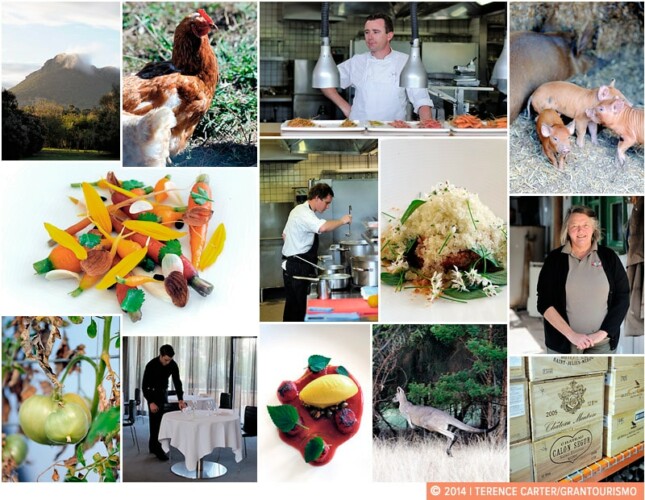 Dunkeld and The Grampians Guide – Where to Stay, Walk, Eat and Drink

Dunkeld and The Grampians — Where to Stay

The finest accommodation in town is at the Royal Mail Hotel, in the heart of Dunkeld in the southernmost Grampians. Although overshadowed by its restaurant and bistro, the Royal Mail Hotel is a hotel with some very comfortable and rather stylish accommodation. Recently renovated, the motel-style rooms are spacious, with balconies or terraces; our’s looked over bushland.

They’re well equipped, with everything you need, such as an iron and ironing board, although there’s no need to pack the suit and LBD. You’re in the country here. Smart casual is all that’s required in the restaurant. There’s also self-catering accommodation in historic bluestone cottages at their Mount Sturgeon property. If you stay here, staff will pick you up for dinner and drop you off again after.

Dan was head chef at Mugaritz near San Sebastian, Spain (currently #3 on the World’s top 50 list), before moving back to Australia to transform this country pub into a culinary destination. Some contemporary Spanish influences can be felt, however, Dan’s food is original, unique and distinctly Australian, based on the freshest of seasonal local produce.

You’ll need to book both the restaurant and accommodation well in advance — especially if you’re hoping to dine on a weekend. While the restaurant is where Dan serves his highly creative and exacting cuisine, the bistro food is also brilliant — we probably enjoyed it just as much, to be honest — and the pub dishes up typically hearty Aussie pub-grub, and is fine for lunch. There’s also a good little café across the road.

The Royal Mail Hotel — What to Savour

The menu at the restaurant at Royal Mail Hotel changes with availability and seasons, as it’s fresh from the restaurant’s own gardens, picked that very day. Each morning chefs spend hours getting their hands dirty, tending to the veggies and plucking what they need. Although it’s not unusual to be strolling along the street and see a chef in whites behind the steering wheel of a vehicle, hurtling in the direction of the garden, just before service as he’s run out of an ingredient.

Highlights of the 12-course Omnivore menu for us were the Egg yolk and new potatoes with salt cod and crackling; Eel and bone marrow with eggplant and pickled vegetables (you can see this dish here); and Duck with calamari and coastal plants, which Dan had foraged from the beach the day before. It was all sublime, and if it wasn’t sublime it was simply some of the most deliciously fascinating food we’ve ever tasted. The wine matchings were also superb, and the sommeliers have every chance to get it right here when there is a very impressive collection of Australian and European wines in their cellar across the road.

Dunkeld and The Grampians — What to See

Dunkeld is a charming little town and the Grampians region is just magic. This is quintessentially Australian sheep country with golden fields dotted with towering gum trees, and close to dusk, grazing kangaroos. But the highlight is the Grampians itself, a majestic, rugged mountain range of craggy peaks that dominate the skyline and should dominate some of your time.

Dunkeld and The Grampians — Where to Walk

Don’t come here without doing a hike or at the very least a short walk. The Royal Mail has a walking map, as do both the tourist office and Brambuk (see below). You can do eight sign-posted walks in Dunkeld, on their nearby Mount Sturgeon property, and in the national park. Allow anything from a light one-hour walk to a huff-and-puff full day hike if you’re up to it. You’ll see ancient Aboriginal rock art, spectacular wildflowers from August to October, and plenty of native wildlife, from koalas and emus to wedge-tailed eagles. You can also do rock climbing, canoeing or go fishing.

Dunkeld and The Grampians — What to Do

Visit Brambuk, the Grampians National Park’s indigenous cultural centre at Halls Gap, where you can do a guided rock art or bushtucker tour or a cultural experience with a local indigenous guide that covers the history and language of the people in the area they call Gariwerd, as well as dreaming stories, didjeridoo playing, dancing, and an introduction to different artefacts, art and crafts. Or you can just wander around on your own along interpretive pathways, check out the exhibitions and displays, or watch the fascinating films shown in the theatrette. (We’ve got more on Brambuk coming up in another post.)

Dunkeld and The Grampians — What to Taste

The local produce and wine from the Grampians is just superb, so get out and taste it. Pick up a copy of The Grampians Official Touring Map from the tourist office on the main street (the Glenelg Highway) of Dunkeld. It has a detailed map with suggested routes, such as a Pyrenees-Grampians drive that will take you to some of Victoria’s finest wineries, and addresses and numbers for wineries, foodie stops, galleries and cafés. Try to visit Best’s Wines, Seppelt Great Western, Mount Langi Ghiran, and Taltarni.

Don’t miss out on a visit to Grampians Pure Sheep Dairy at Stirling, where the lovely owner and cheese-maker Elizabeth can give you a tasting of her scrummy sheep milk yoghurt and cheese; call ahead: 03 5577 4223. Also go see Anthony and Amanda at Greenvale Farm and piggery to help them catch their precocious free-range Berkshire and Tamworth pigs who keep running out on the road. They also offer some good old-fashioned country accommodation and farm experiences, for foodies and families.

Dunkeld and The Grampians — Where to Shop

There’s a terrific shop at Brambuk that has some excellent books on the area and indigenous culture and history, as well as crafts, gifts, souvenirs, and Australiana kitsch. Foodies should buy some sheep’s milk yoghurt and cheese from Grampians Pure Sheep Dairy (see above). There are also a handful of wineries close by and an abundance in the area, in the Grampians, Pyrenees and Henty wine regions; see this link for info. If you get to nearby Hamilton, less than an hour from Dunkeld (and home to a fine art museum), stock up on wine and gourmet goodies, like Mount Zero Olives, from the region and Victoria at the Darriwill Farm Shop.

Dunkeld and The Grampians — How to Get There and Get Around

Melbournians and interstate visitors will drive to Dunkeld for an overnight or weekend stay for dinner. You can pick up a hire car from Melbourne or the airport for the cruise to Dunkeld.

You can also fly from Melbourne to Hamilton with Sharp Airlines and pick up a hire car there or arrange a transfer to Dunkeld; details here.

A more affordable option is a VLine train-bus combination from Melbourne to Dunkeld via Ballarat. The bus stops 2-minutes walk from the Royal Mail Hotel on the Glenelg Highway. You can then book a tour to see the local sights. See the Visit Grampians.

A Dunkeld and Grampians Itinerary

Our best tip is to stay two nights. We know for foreign visitors time is always limited, but we think you should allow two nights to properly experience the Royal Mail Hotel and Dunkeld.

Day 1 Arrive at noon from Melbourne, have lunch at the café across the road or in the pub, do a tour in the afternoon or take a drive around the area, visiting some local wineries and foodie destinations, then dine in the bistro that night.

Day 2 Early the next morning take a hike up the mountain, visit Brambuk in the afternoon, where you can lunch at the cafe. Dine at the restaurant for dinner. Rewards for your hike don’t come much better than a meal here. It’s simply one of the world’s best food experiences.

Thank you to Dan Hunter and the Royal Mail Hotel for their time and hospitality and Grampians Tourism and Tourism Victoria for making the trip possible.

UPDATE September 2013
Chef Dan Hunter left the Royal Mail Hotel and opened his own restaurant Brae at the end of 2013 in the beautiful Otways on the southwest coast of Victoria. See www.braerestaurant.com for more details and follow @BraeRestaurant and @ChefDanHunter on Twitter. We hope to share our experience of Dan’s new restaurant here in the near future.

Powered by GetYourGuide. Become a partner.