On the long flight to New York City from Tokyo, I drifted through an episode of Anthony Bourdain’s No Reservations while lying comfortably horizontal in Cathay Pacific’s brilliant business class ‘coffin’.

Bourdain’s quest does indeed turn up some great food in the boroughs. One of Bourdain’s guests on his adventure was New York City’s current culinary rock star, David Chang, of Momofuku restaurants fame, whose food we were eager to try during our two-week stay. I dozed off dreaming of ginger scallion noodles.

Our driver from the car service that collected us from JFK was from the Dominican Republic and lived right around the corner from our East Village holiday rental. He praised the local ‘authentic’ ‘ethnic’ cuisines you could get in our neighbourhood and we were quickly salivating.

We decided that, seeing Chinatown and Little Italy were just down the road, and landmarks such as Katz’s Deli were nearby, that we should undertake an ‘ethnic’-focused culinary adventure centred on the East Village and Lower East Side and eschew the stuffiness of restaurants such as Per Se (not to mention its $275 a head menu).

Instead, we would tuck into the local, affordable, ‘authentic’ representations of the ‘ethnic’ cuisines of the waves of immigrants that have come ashore in New York in recent history. Sadly, the taste test would quickly sour.

On our first night in East Village we played it by ear and were walk-ins at a local Italian joint that looked fabulous, but the food was uninspiring. Okay, that was our own fault for deciding to wing it and not having done enough research.

The next evening, jet-lagged and eager to stay in, and having spent much of the day doing what travel writers do and consulting the usual suspects when it came to eating out in NYC, and cross-checking and triangulating data, we set off for some ‘authentic’ ‘ethnic’ fast food and decided on Turkish at Bereket. But alas, another disappointing experience with unfeasibly dry meat and sad salad, accompanied by an awful sauce that was as authentically Turkish as I am. 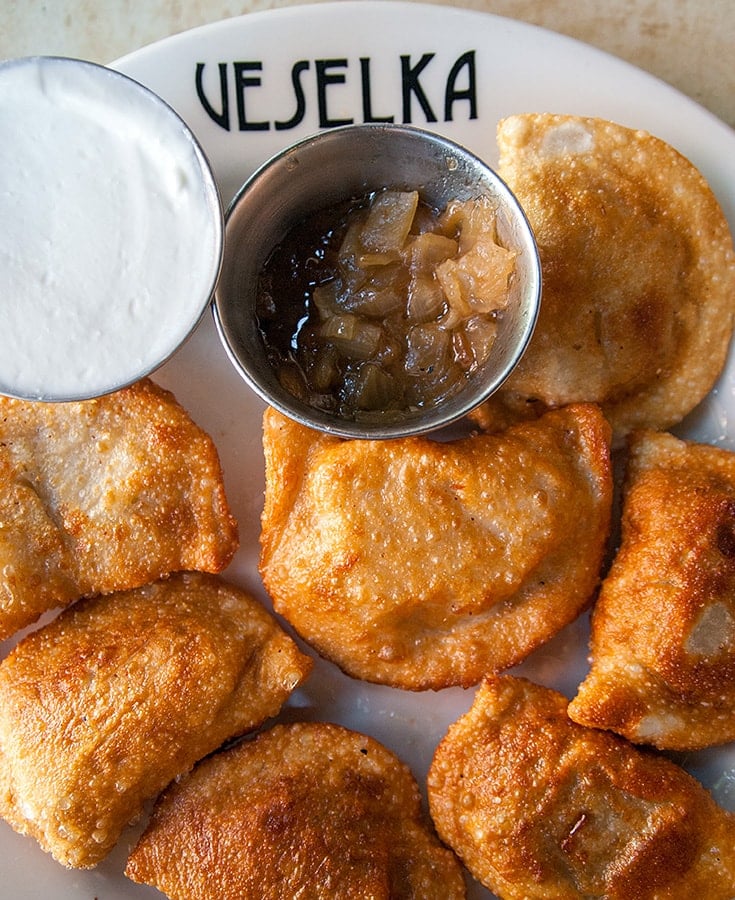 Next, we tried Veselka, an inexplicably popular Ukrainian diner that would have made Lara’s Russian-Ukrainian grandparents weep – and not for joy. The meatballs had a tough exterior masking a dried cement centre, the vareniki (potato dumplings), ordered fried, were deep fried sarcophagi. The food was only redeemed by a simple beetroot salad that was delicious. When we couldn’t finish it our waitress pointed out that it was the best dish on the table. Boy, was she right.

Later on in the week, trying what was called ‘New American’ cuisine at a locally recommended place regrettably called Prune, we had the most overpriced plate of food ever put in front of us – a few miniscule, sad-looking pieces of chewy calamari atop masses of sliced celery and other vegetables for $14.

Prune’s version of pho, the classic Vietnamese soup dish, had some beautifully slow-cooked beef accompanied by a limp broth and a few bean sprouts. A fatty lamb shoulder defied all attempts to get a piece to a fork that didn’t contain 50% fat, while a Greek salad (with barely a drop of olive oil) would have had the chef kicked off Santorini. If this was ‘New’ American cuisine, I had much sympathy for those who suffered through ‘Old’ American cuisine.

We’d been craving Indian for months, which we used to eat at least once week when we lived full-time in Dubai, where the largest percentage of the population is from the Indian Sub-Continent. There, the Indian restaurants specialise in regional cuisines, and it’s as authentic as any you’ll find in India, and that’s according to Indian expats. Devi, the restaurant we tried here, reached for the heights of the master of gastronomic Indian, Vineet Bhatia, but failed, inelegantly.

The aforementioned David Chang’s cuisine was another beast altogether. His vaguely Korean deconstructions and reinterpretations seemed pointless to these Korean food fans – kim chee pork tamales sounded interesting, but managed to insult both Korean and Mexican food in one mouthful.

Having just come from Tokyo, Chang’s ramen noodles were well below the quality of even local chain noodle shops in the city. His pork ‘buns’ were just okay, but it’s hard to go wrong with slow-cooked pork belly and hoisin sauce.

His much-admired ginger scallion noodles, which I’d been cooking since I first came across the recipe, were a letdown: too dry, with too little ginger to give it kick, perhaps to not scare off the hipsters banging elbows and screaming their orders over the shrill soundtrack as they sipped ostentatiously marked-up $50 bottles of plonk from glasses with no stems.

The problem with Momofuku – and this is a problem that we had with most of the ‘ethnic’ food we tried in New York – is that Chang is not really catering to Asians. He’s catering to people who probably know little about Asian food and are willing to swallow the hype to suffer though their first bites of kimchee, which they probably think Chang invented.

To laud Chang as a culinary luminary shows how the New York City dining scene reporting is in a state of flux, having now reviewed Per Se, Jean-George, etc a dozen times.

New York City certainly has some fine restaurants at the top end, some fun places to eat at the bottom (if you turn a blind eye to the food’s departure from its ethnic roots), and a lot that are overrated or clearly maddeningly inconsistent in the middle.

The noise level of some places, spurred on by already ludicrously loud and often ill-chosen soundtracks, had me reaching for the beverage menu to soothe my nerves, only to be reminded of the outrageously marked-up bottles of vino you have to drink from stem-less glasses. What’s with that? 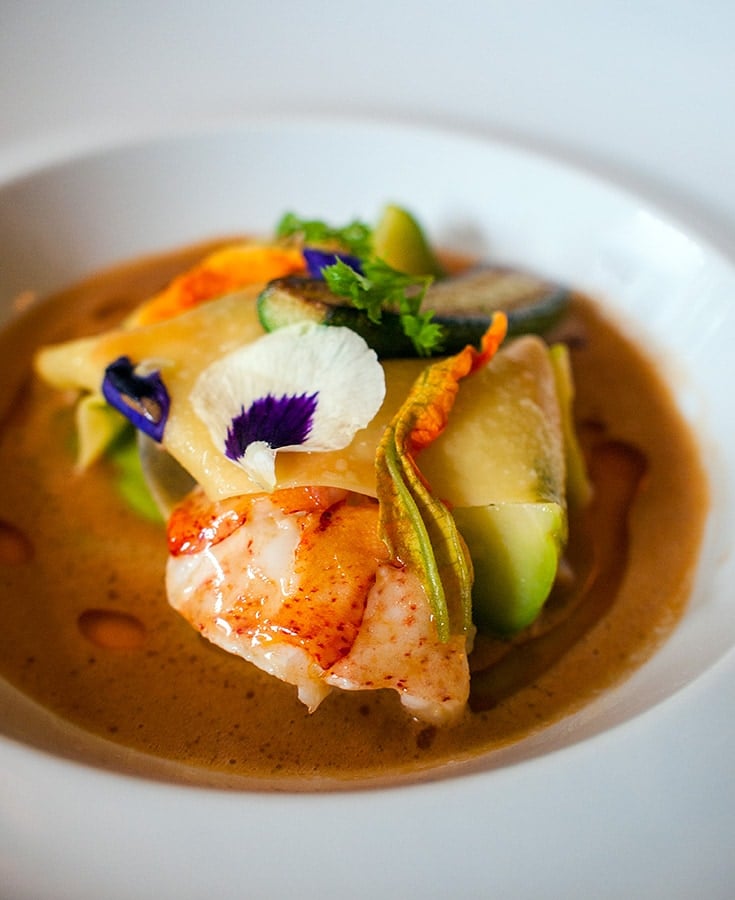 Two days before we left New York we ditched the Bourdain-inspired plan and visited the restaurant Eleven Madison Park. The room was divinely Art Deco and the service was note-perfect – just the right balance of familiarity and formality – and both our waitpersons were graduate chefs from the Culinary Institute of America (CIA).

The food was contemporary French, beautifully presented, but with no silly affectations apart from a delicious tomato lollipop. Despite the presence of Maldon sea salt on the table (primarily there to dip a little of the heavenly bread and butter into), I never reached for it. I have to cast my mind back a long way to recall a better seasoned or better cooked meal.

We’ve certainly had more creative and culinary adventurous fare in Europe and Australia, but when the cooking is of this high a standard the ‘wow factor’ comes with, well, just how perfectly the food is prepared and presented. 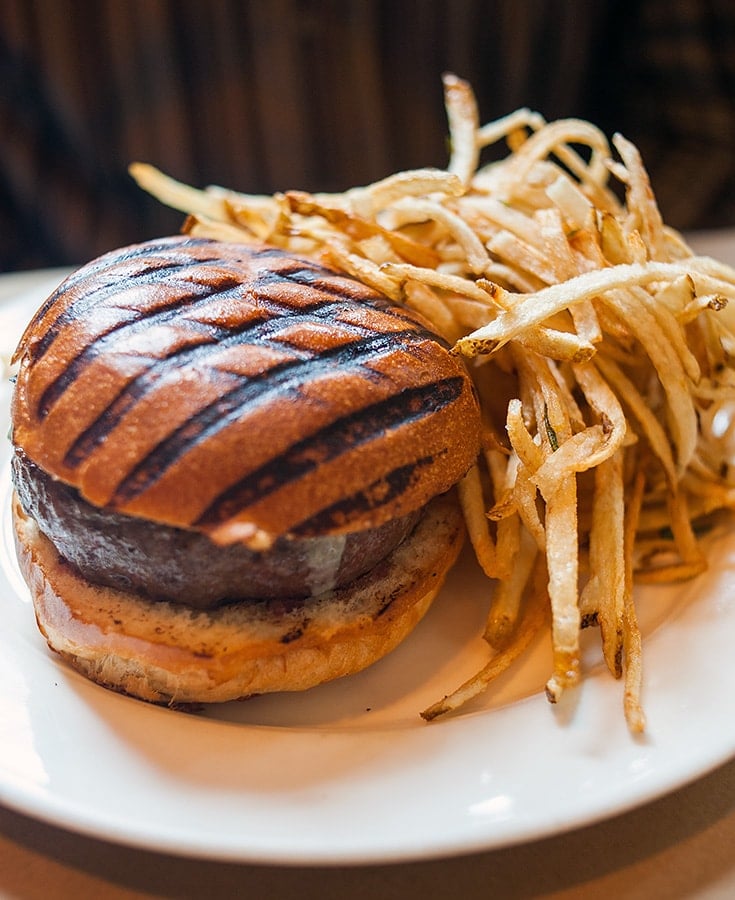 As we lamented our ‘bad luck’ on the rest of the trip – courtesy of recommendations by the New York Times, The New Yorker, Village Voice, and various New York-based restaurant critics and food bloggers – and poured out our woes to our new New Yorker friends, they told us that we would have had to leave the island and go further afield to get ‘authentic’ ‘ethnic’ food, to areas where the newcomer chefs and restaurateurs had not yet started watering down their cuisine because they had an audience of customers not wanting it any other way.

On our last day, deeming our ‘ethnic’ experiment to be a failure, and having had the best meal by far at Eleven Madison Park, Lara asked, “Do you think we could still get a booking at Per Se?”

By that stage I was almost starting to think it was a good idea… and that Bourdain was on to something by heading to the other boroughs. Next trip.

Enjoy this? Our brief and no-holds-barred thoughts on every place we sampled in NYC.