Cooking in Bali with Desak ended up being one of the highlights of our two-week stay in our Balinese villa, allowing us to tick off a few grand tour goals – learning from locals, learning to cook the local cuisine, and giving back. I taught Desak Western dishes in exchange for her Balinese cooking lessons.

Our cook Desak trained and worked as a waitress at one of Bali’s five-star hotels before she became a private villa chef. In addition to her seemingly effortless ability to turn out Balinese classics, Desak also cooks Western food, but isn’t quite as confident at doing so.

Most villa guests opt for Balinese food or pan-Indonesian cuisine when eating in, but occasionally guests (and the owner when he’s there) want a break from local cuisine. It was the perfect opportunity for a culinary exchange.

Cooking with Desak in Bali in a Cultural Cooking Exchange

Desak possesses the most important quality of a good chef, a sense of balance with every dish she makes – she has ingredient amounts and seasoning down pat.

Sensing Desak would be an easy student, Lara, with her usual generosity of spirit, offered my services to teach her some new recipes if she taught me some Balinese dishes, which you can read about here, here and here – a kind of cooking exchange programme.

I spent the first week at the villa deciding what dishes I would teach Desak that she could make quite easily in the villa kitchen using ingredients that were readily available.

Desak wanted to learn a couple of sauces to go with steak, a seafood dish that would use salmon or tuna, and whatever else I felt would be easy to make with local ingredients, but with a Western or Asian ‘fusion’ twist.

Here’s what I decided to make:
Sweet potato and ginger soup with shrimps
Prawns with avocado
Ginger scallion noodles
Salmon with colcannon
Steak with mushroom or pepper sauce

Somewhat irrationally, I decided on the list of recipes before really making sure that I could get everything fresh, so my shopping trip to purchase the ingredients was a minor disaster.

Avocados were either very expensive or hard as a rock. The local rump steak is so tough that locals tenderise it mercilessly before cooking. I bought some ‘bacon’ that I thought would be a decent substitute for pancetta (which adorns the salmon dish) which was so awful even the villa dog Dinah had a hard time swallowing it. The kilo of sweet potatoes I bought, even though they were labeled as such, turned out to be, well, not so sweet. They obviously had the wrong tag on them…

After making the not-so-sweet potato and ginger soup with shrimps with Desak, we decided that the local pumpkin would be a better fit for her future efforts. It’s an easy soup to make and you can store it for a couple of days – perfect for a villa full of guests.

My prawns with avocado dish was abandoned, due to the rock-hard avocado, but I did show her how to grill prawns quickly marinated in soy and sugar. The rest of the prawns got used in the colcannon, which was part of the recipe anyway. 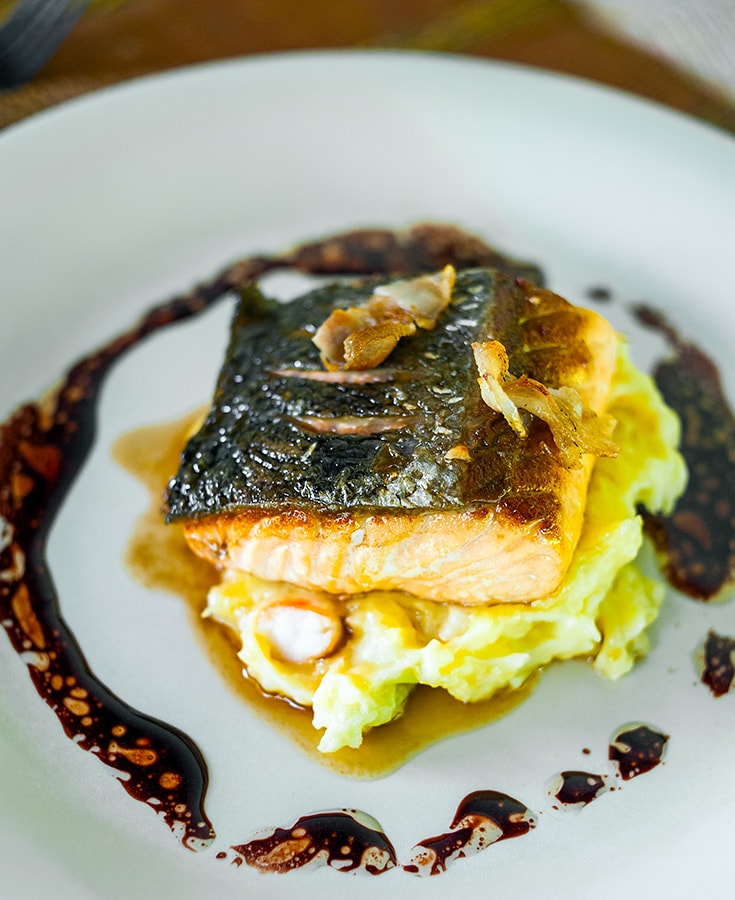 With some leftover salmon, we made some ginger scallion noodles, using the ginger scallion sauce recipe from New York chef, David Chang, somewhat overly famous for his Momofuku restaurants. Both ginger and scallions are plentiful on the island.

I then taught Desak a couple of the classic sauces that generally accompany steak – a mushroom sauce and a pepper sauce – which she both loved.

Over the course of one long day and lunch and dinner, Desak and I cooked together, and the four of us (including Lara’s mother, who was visiting for a week) ate all the dishes together.

As we ate we discussed the dishes, the ingredients we used, what could be used in their place, and how Desak could vary the recipes – like cooks and foodies anywhere. 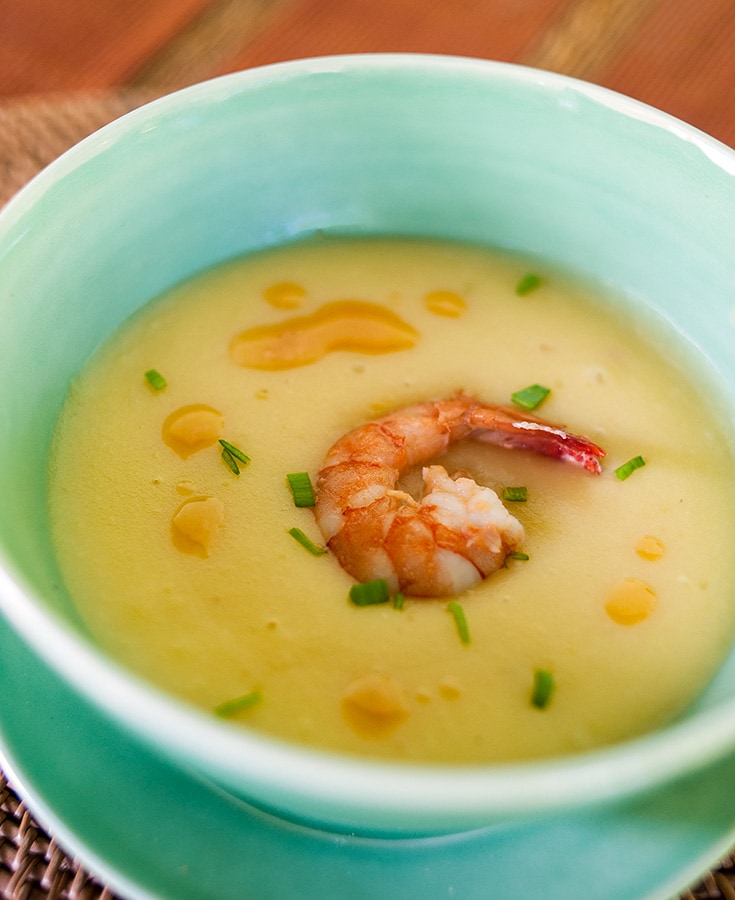 Desak said it was the best food she’d eaten. Ever. But most of all she was really happy about what she had learned – and I was happy to have given her a few new ideas for her repertoire.

I was exhausted afterwards, but a couple of days later, on our very last morning in Bali, Desak said she had a surprise for me…

Just one hour before we left for the airport Desak presented us with plates of ginger scallion noodles topped with perfectly grilled prawns. It was delicious and she was justifiably proud of them. It made it all worthwhile.