Chef Peter Gilmore and Quay Restaurant in Sydney are two icons of the city’s gastronomic scene. The chef is one of the most passionate and inventive of Australia’s cooks, while the restaurant with its spectacular harbour views that sweep from the Sydney Harbour Bridge to the Opera House would be the place to eat even without such talent in the kitchen.

We spent much of our time in Australia last year writing about the fantastic food scene and formidable restaurants and talking to the finest local chefs, from Dan Hunter to Ben Shewry – as well as chatting to great foreign chefs, including Rene Redzepi and Massimo Bottura about what makes dining in Australia so special. One chef we got to spend time with was Chef Peter Gilmore of Quay restaurant in Sydney.

Quay restaurant offers extraordinary views of Sydney Harbour, the Opera House and the Sydney Harbour Bridge and can average close to 100 customers for lunch or dinner service. However, it belies those restaurant-reviewing truisms by being widely recognised as Australia’s best restaurant. For food lovers visiting Sydney, dining here easily ranks above climbing the Bridge or seeing an opera when visiting the sun-kissed city. 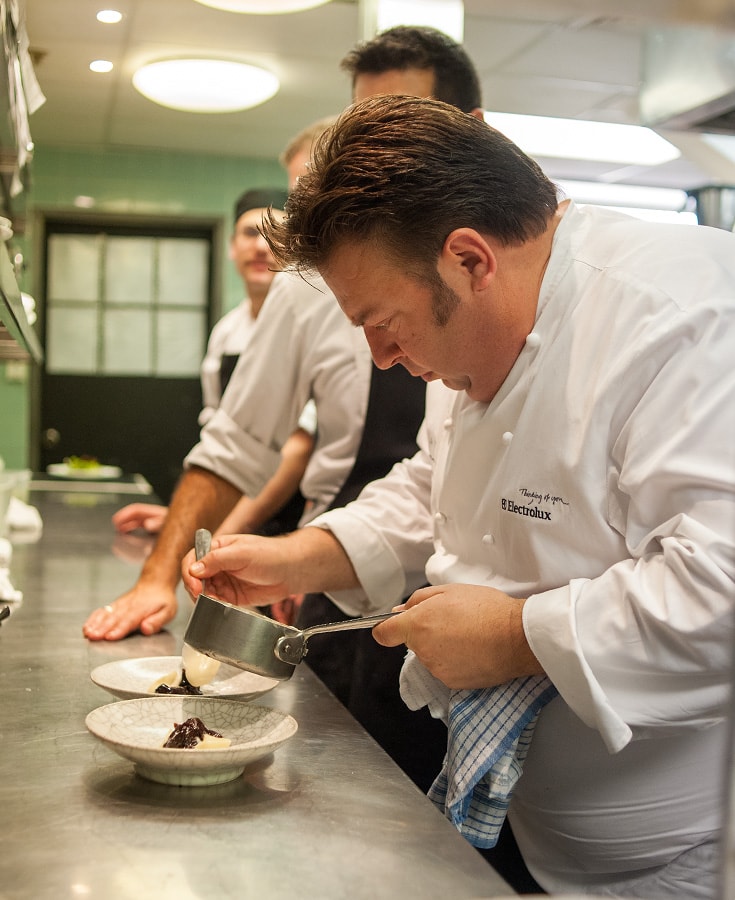 From the first sip of Champagne – and this is a restaurant where you’ll want to pop some bubbles – to drinking in the views, a meal at Quay is something to savour.

Despite all this acclaim, Quay’s chef of over ten years, Peter Gilmore, remains the quintessential chef’s chef. He doesn’t front a chain of restaurants. He doesn’t endorse stock cubes or have a line of pasta sauces in supermarkets. You will never tune into morning television to see him flirting with TV presenters while whipping up a dumbed down version of his carefully considered dishes.

One television appearance he did make on an exceptionally popular Australian cooking reality show teetered on making the chef a celebrity, much to his surprise. 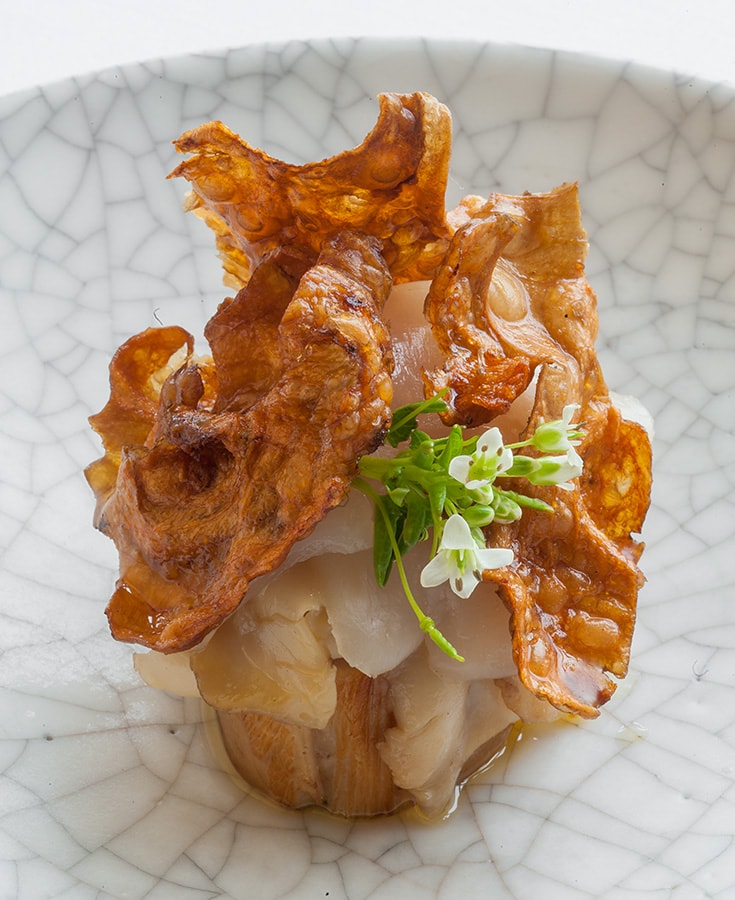 “Being recognised on the street was weird at first…,” Chef Gilmore confided to us in his deep, smooth voice as we strolled through the light-filled dining room towards his busy but calm hub of a kitchen.

However, it was clear that people did recognise him. As we passed through the buzzy restaurant, a young teenager dining with his dad fawned over the chef as if he was a bonafide rock star. In culinary terms, he is.

While the restaurant was already extraordinarily busy before Gilmore’s television appearance (there is customarily a six month waiting list for a Saturday night table), the exposure saw Quay’s waiting list grow even longer.

John Fink, third generation restaurateur and director of the family-owned Fink Group, which owns Quay, amusingly quipped that they had been so busy, “my mother can’t even get a booking”. (See John Fink’s Guide to Eating and Drinking in Sydney.)

Once we were in the kitchen, Gilmore added some last-minute touches to his intricate dishes while an endless flow of committed wait staff – undoubtedly Sydney’s best – effortlessly juggled dishes while memorising Gilmore’s little phrases, such as “please take a moment to enjoy the perfume of the dish”, to help diners get even more out of these beautifully balanced plates.

The aromatic dish in question on the day Lara and I dined at Quay was Berkshire pig jowl, maltose crackling, prunes, and cauliflower cream, perfumed with prune kernel oil. While the perfume of the dish was otherworldly, so was the look of the dish. Gilmore’s creations are often strikingly elegant, such as the starters from the degustation menu we sampled.

The first, a sashimi of blue mackerel, smoked eel flowers, sea scallops, pickled apple, nasturtiums, and Tasmanian wasabi, and the second, a salad of rhubarb, endive beetroot, purple carrot, rosa radish, kohlrabi, goat’s curd, pomegranate molasses, and violets were so pretty that we witnessed diners just staring at them for a few moments before even thinking of lifting a fork from the crisp white tablecloth.

The pig jowl dish, on the other hand, had diners perplexed about the surprising appearance of the ‘crackling’ before the aromas of the dish proved too much and they had to dive in, alternating each moreish mouthful with a sip of a notable red wine from Quay’s exceptional wine list.

While that dish sounds heavy on paper, in the mouth it’s a delight, with the tremendous mix of textures and balance of flavours that are the chef’s trademarks.

“I really spend a lot of time making sure the ingredients don’t only work texturally or visually, but also on the whole combination – the flavours, the texture, the visual approach, the sense of proportions, the sense of balance,” Gilmore told us. “Everything about the dish has to have some sort of sense of harmony.”

Chef Gilmore calls his cuisine ‘nature based’ and while that may come across as elementary, the chef’s roots are in, well, making seeds take root. The chef’s unfeigned connection to the land began when he started planting his own home garden over seven years ago.

“When everyone was into molecular food I turned my back on it and said, no, I want to look towards the garden, towards nature,” Gilmore explained.

Gilmore’s home experiments saw him planting ancient and heirloom varieties of vegetables that Quay later contracted Blue Mountains organic farmers Richard and Nina Kalina to grow in ample volume for the restaurant. His quest to reintroduce rare varieties of vegetables allowed him a contractual exclusive use of that ingredient from his farmers for the first two years of supply. He also utilises around eight or nine suppliers of specialty ingredients at any one time during the year.

While these methods of sourcing produce are building momentum with progressive chefs worldwide, Gilmore had his system in place while other chefs were still engrossed with replicating the foams and spherification techniques that were the legacies of influential Spanish chef Ferran Adrià. 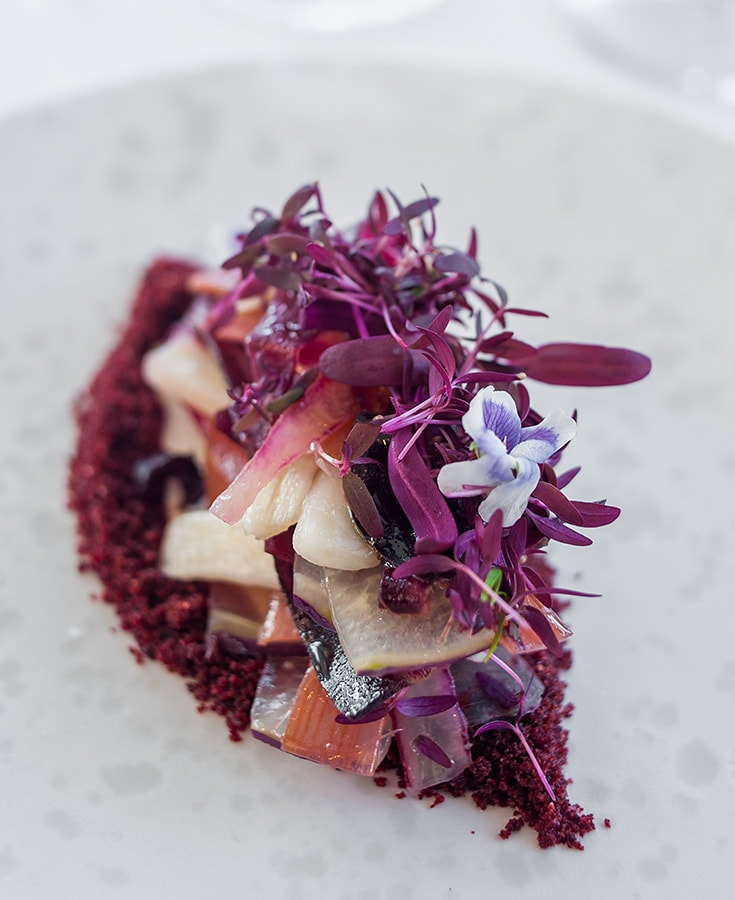 As I watched the chef work in the kitchen, some diners in the restaurant had already finished their main courses and in the kitchen the chefs on dessert duty were not only cramped for space but for time. Of the 14 chefs the kitchen requires to cover a meal service (there are 28 chefs altogether), a few of them were busy preparing desserts – one of which is a tricky dish that they can’t take off the menu due to its popularity, the chef’s famous snow egg.

Many chefs leave the sweet stuff to a dedicated pastry chef, but Gilmore explained that, “It all comes from me. Because I believe the dining experience has to be seamless, from the beginning to the end, and have the same creative vision all the way through.” Gilmore’s insistence on writing his own dessert menu is essential to making Quay such a complete dining experience.

Later, as the last of the desserts left the pass, Gilmore met with a dairy supplier who had arrived and sampled his butter before instructing a chef on how he wanted an ingredient prepared for a new dish he was developing. While John Fink has insisted Gilmore block out one day a week for experimenting and refining new dishes, creativity doesn’t work to a timetable. The chef tries to strike a balance between reinventing his classic dishes and finding room for new ones to take their place, insisting that anything new on the menu has to earn its presence on the table.

On the day that Lara and I visited the restaurant to interview the chef, Gilmore presented us with a surreal, sculptural-looking ‘chocolate ethereal’ dessert he was about to add to the menu. Consisting of jersey ice cream, salted caramel, prunes, walnuts, and ethereal sheets of different types of milk chocolate, it was enchanting to look at and even more dreamy to taste.

The dining scene in Sydney – and indeed in Australia – is in the best shape it’s ever been with accomplished and adventurous chefs at the helm of great restaurants making the most of Australia’s brilliant produce.

Peter Gilmore and his team, along with their producers and suppliers, make Quay one of the most singular dining experiences in Australia, if not the world. It’s the best of bright, beautiful Sydney on a plate. And it has those killer views.

At the end of the month, the 2013 San Pellegrino World’s 50 Best Restaurants will be announced. We won’t be surprised if Quay – and a few of our other favourite Australian restaurants – climb up the list.