They’re so big you need to hold the crispy crescent-shaped savoury turnovers in two hands to bite into their crunchy exteriors. I can’t help but imagine the cheeky grin and glint in the eyes of the little girl who became my baboushka, as she munched into these fried treats on the seaside holidays she so fondly recalled.

If you make these and enjoy them, try my mini chebureki recipe, which makes smaller, more manageable and spicier versions of these ground beef turnovers.

But before I tell you more about this traditional chebureki recipe I have a favour to ask. Grantourismo is reader-funded. If you’ve enjoyed my Russian recipes, our Cambodian recipes or any of our recipes on the site, please consider supporting Grantourismo by using our links to book accommodation, rent a car or campervan or motorhome, buy travel insurance, or book a tour on Klook or Get Your Guide.

You could also shop our Grantourismo store on Society6 for gifts for foodies, including fun reusable cloth face masks designed with Terence’s images or consider contributing to our epic original Cambodian cuisine history and cookbook on Patreon.

Or you could purchase something on Amazon, such as these James Beard award-winning cookbooks, cookbooks by Australian chefs, classic cookbooks for serious cooks, cookbooks for culinary travellers, travel books to inspire wanderlust, or gifts for Asian food lovers, picnic lovers and travellers who love photography. We may earn a small commission but you won’t pay extra.

Now let me tell you about this traditional chebureki recipe for the crunchy fried pastries filled with savoury ground beef and onion.

I spotted chebureki – the plural of cheburek – at fast food outlets in Moscow a couple of decades ago. We were on a summer holiday in Russia that Terence and I took my mum on after my dad died.

I have to confess that I was tempted to try the fast food iteration, as oily as they looked, but there was so much other wonderful food to sample on a trip that was all too short, and it was impossible to eat everything.

It was also a trip upon which I was determined to achieve some goals, starting with experiencing the cuisine of my ancestors in the country that it came from, to see if it was as delicious as the food that I grew up with that my Russian grandmother and mum cooked.

We also wanted to get a taste of ‘new Russian cuisine’, the modern and contemporary takes on traditional food served up in fancy restaurants, and chebureki didn’t fit into either plan unfortunately.

They just didn’t look as delicious as I remembered them. I know if I was to go in the future, I’d approach a return trip rather differently, with the goal of sampling the depth and variety of cuisines that exist in a country as large and as multicultural as Russia. 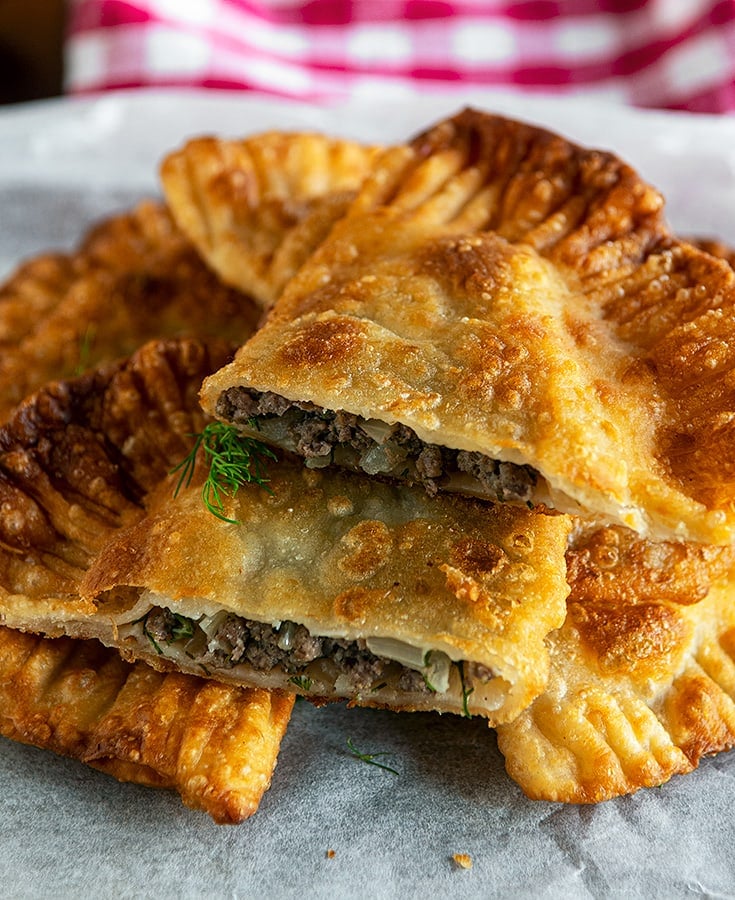 As a child growing up in the western suburbs of Sydney, Australia, in the 1970s, there were few things I loved more than the long lunches that turned into dinners at my Russian grandparents’ home with my baboushka and papa, mum and dad, my two young uncles and their girlfriends, and whoever else dropped in or we dragged along for what would always turn into yet another memorable meal.

I will always treasure those memories of quality family time around the dining table, sharing stories as much as food. And I have to confess that that’s one of the reasons I continue to cook the food of Russia and Ukraine, and dig deep into my memory as much as the history of the food that my family cooked, and the history of my grandparents’ homeland.

I loved those family meals as much for the mouthwatering food as for the vivid tales that my grandparents told that transported us from their red-brick home in suburban Blacktown to the sparkling Black Sea and shimmering silver birch groves, taking us back in time to my baba and papa’s own childhoods in the early 20th century.

Although the story of the time that my younger grandmother came across an enormous brown bear in the forest is hard to forget, I most relished baba’s recollections of Crimean summer holidays. For her young self, life was carefree and full of sunshine and ice cream in the cosmopolitan Odessa she called home, despite the fact that she was born on the eve of the Bolshevik revolution.

I don’t think I ever saw baba as happy as she was when she retold tales from her childhood, from the balmy summers of the sub-tropical coast and the abundance of delicious food, which provided a stark contrast to the upheaval of the war when her memories were mostly of being hungry and having sore feet from long walks across Europe to safety.

A summer of eating my way through Odessa is high on my list of things to do one day, if we’re ever able to travel safely again, something I could never have imagined thinking during the last two years of the pandemic. 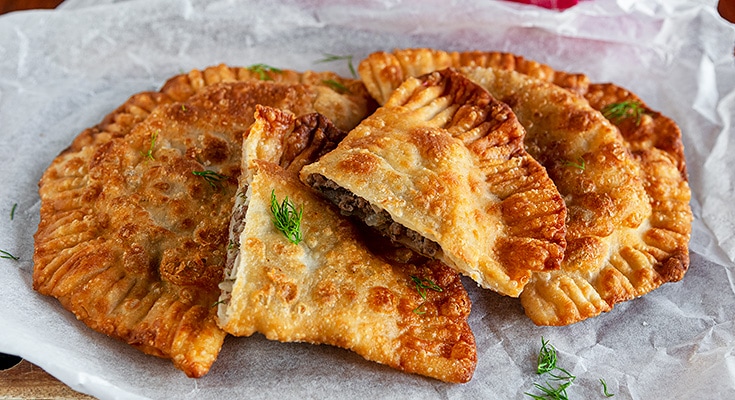 As usual, only a few tips to making this traditional chebureki recipe as it’s really very easy.

While I’ve tested this chebureki recipe multiple times and it’s worked out perfectly every time, I do know that different types of flour can result in different consistencies, so I recommend adding the water to the flour in stages. If it’s a little too wet you can always add more flour, however, be prepared to adjust other amounts accordingly.

Don’t leave the dough to rest for longer than an hour as it can become too supple, yet, by the same token, don’t try to knead it and roll it out sooner than that as it won’t be as stretchy as you want it.

Our chebureki recipe calls for the onion to be fried first until translucent. Most don’t, and as much as I like the crunch and bite of raw onion (many don’t), it makes for a more delicious filling if you fry the onion until soft.

Don’t over-stuff the pastries. A tablespoon of filling spread out is plenty. If you over-fill it with the minced meat mixture, the pastry will not only be unbalanced, but it won’t hold shape or maintain its crunchiness.

The chebureki will also lose their crispiness the longer they sit around after frying, so don’t make these ahead. Prepare them when you plan on eating them and serve them immediately so they are crunchy and piping hot.

Please do let us know if you make this traditional chebureki recipe for crunchy fried pastries filled with savoury ground beef and onion in the comments below, as we’d love to know how they turn out for you.