This afternoon chocolate delight recipe from one of Barcelona‘s best chefs is based upon a traditional after-school treat his grandma made that inspired one of the contemporary creations Chef Jordi Artal serves at his restaurant.

One of our most memorable dining experiences last year was a degustation meal at Cinc Sentits, the restaurant of Michelin starred chef Jordi Artal, a Catalan-Canadian chef residing in Barcelona.

Not only is Jordi one of Spain‘s finest culinary talents, he has achieved success without formal kitchen training. The guy has talent to burn and in a story on Barcelona that The New York Times published in 2009, his restaurant was their fine dining restaurant of choice.

While Jordi’s food is very creative, it’s not form over flavour or a whacky combination of ingredients with some ‘foam’ on top to give it an avant-garde touch. Each of his dishes is informed by his traditional Catalan roots and uses Catalan-sourced ingredients — something that you’ll see in this afternoon chocolate delight recipe – but is rethought using the chef’s arsenal of contemporary techniques. 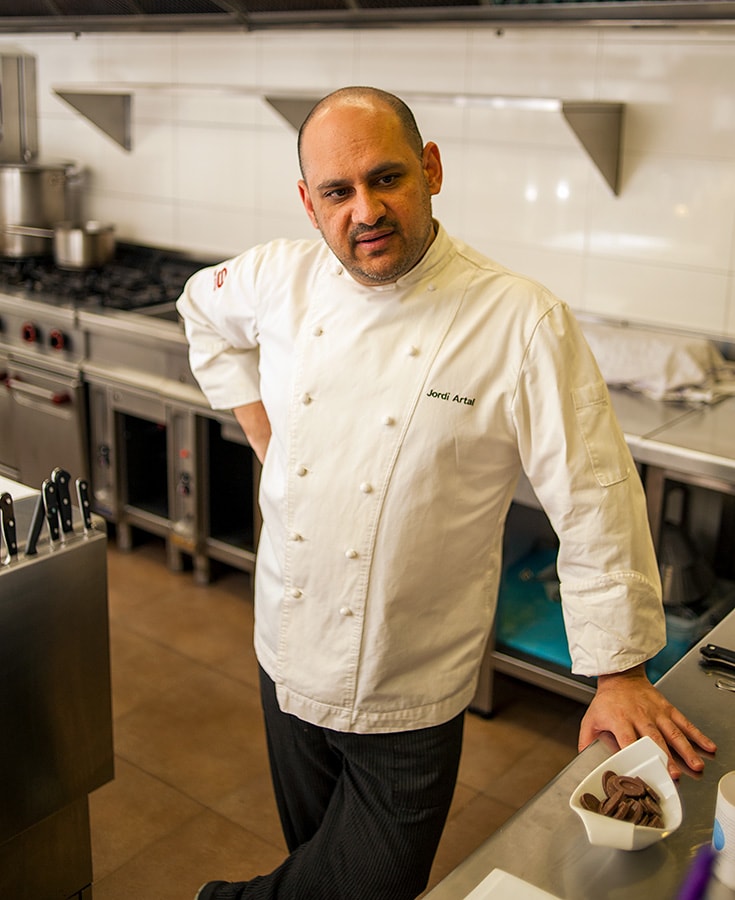 Jordi admits to agonising over the creation of a menu, taking care not to repeat ingredients, ensuring every dish works together, thinking about wine pairing, and keeping his food costs manageable. He cares so much that he even refuses to serve the same kind of ingredient twice in a tasting menu.

We spent some time talking to Jordi after our first meal at the restaurant last summer in Barcelona when the friendly sommelier offered to introduce us to him. Jordi sat down with us after lunch – usually his break before yet another packed dinner at his small restaurant – and answered our endless questions about his food and the Barcelona dining scene. 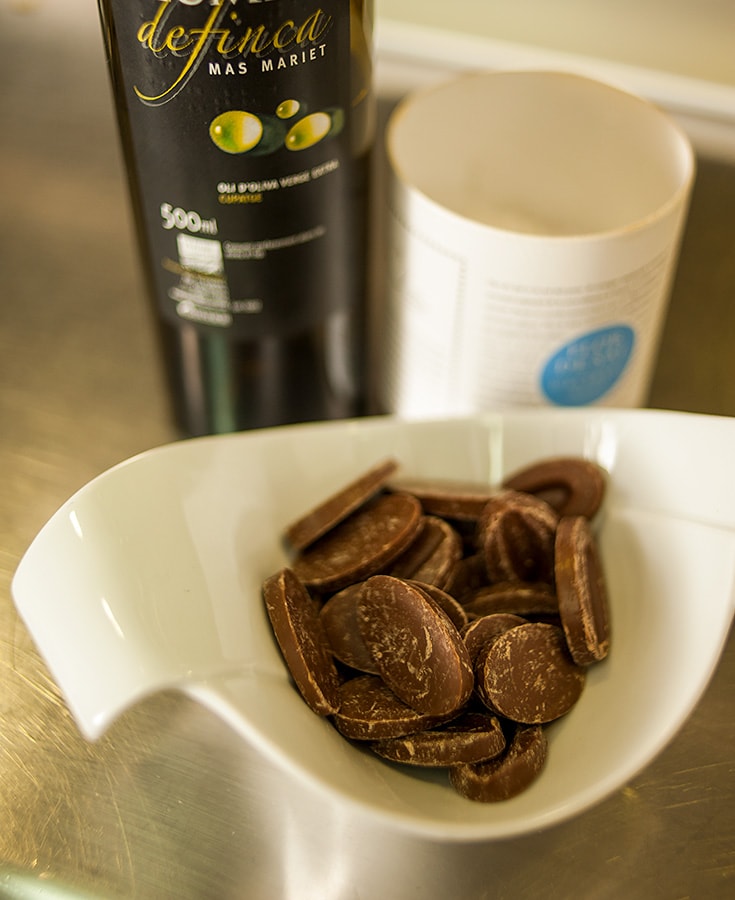 Naturally, Jordi was the first chef I thought of consulting for my series on The Dish when we knew we were returning to Barcelona – and his suggestion for a quintessential dish from Barcelona that I should learn to make didn’t disappoint.

When we approached Jordi to teach me how to make a dish that in some way represented the new wave of creative Catalan cooking in Barcelona, Jordi took a u-turn.

Jordi told us that the basis for a lot of his thinking behind dishes is that people don’t want to go to a fine dining restaurant to eat something they could make at home, a notion that I wholeheartedly share. Yet at the same time, many of the dishes he creates are based upon just that – dishes he has grown up eating in the family home. 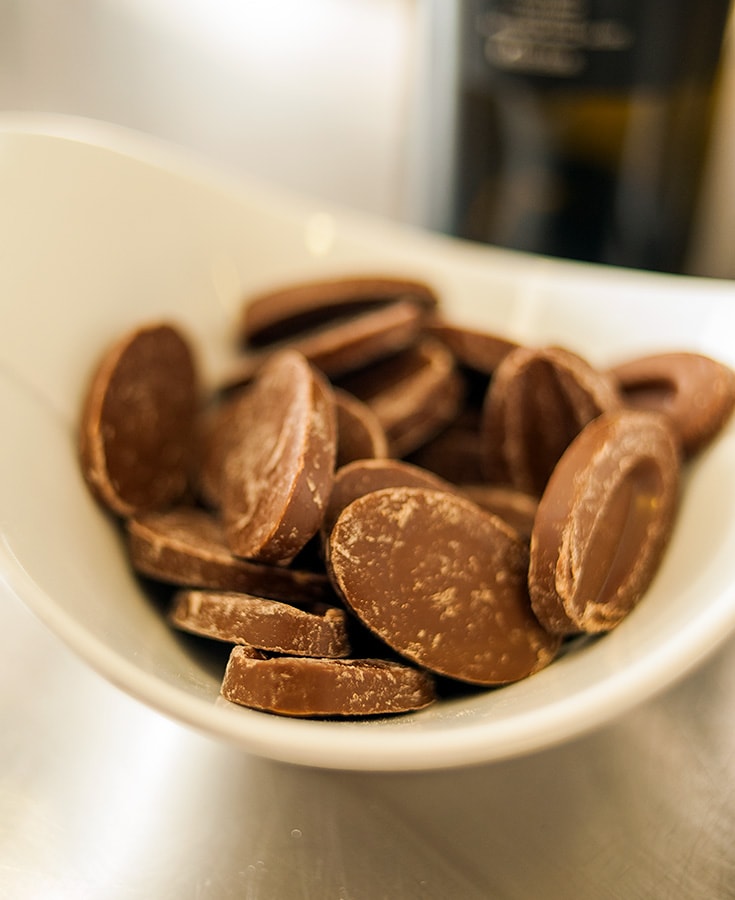 Instead of teaching me a contemporary dish that would be complicated and difficult to make, Jordi suggested showing me how to make this ‘afternoon chocolate delight’, something his grandmother used to make him after school as a treat (“if he was a good boy”), that he has recreated into one of the most sublime desserts we’ve ever tasted.

The ingredients? Bread, chocolate, olive oil and salt – pa, xocolata, oli i sal in Catalan. Simple as that.

Rather than deconstructing Catalan dishes, Jordi says “I like to think that we are ‘reconstructing’ them, generally by using the ingredients and/or methods of a particular recipe to rebuild the dish into something new.”

For instance, Jordi might replace a few ingredients with similar or higher quality ingredients and present the dish in a very different way, as he’s done with this after school snack that he transformed into a heavenly dessert. 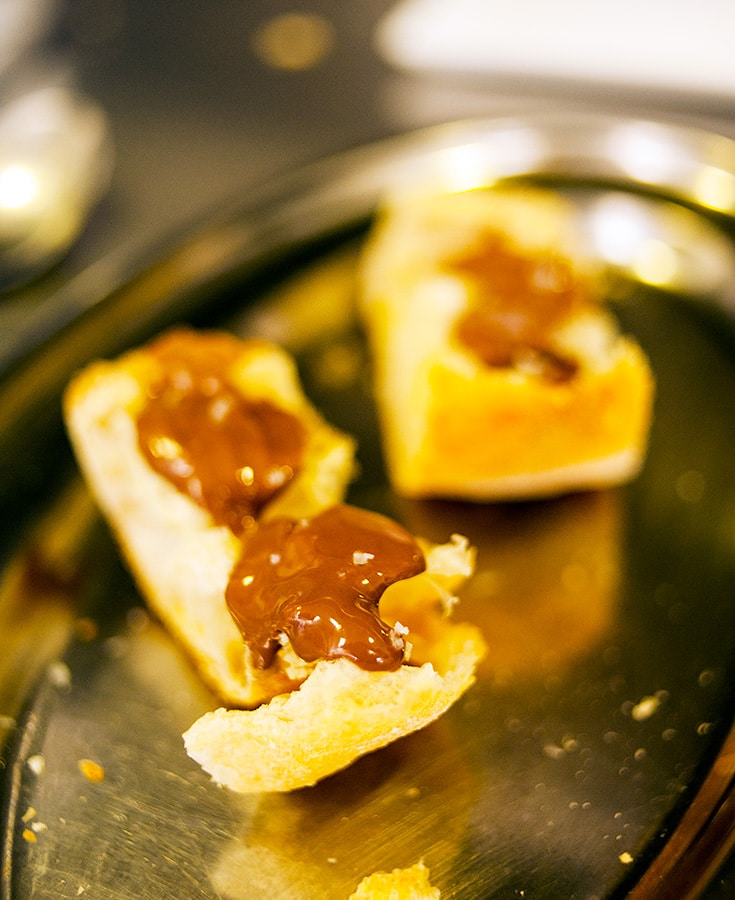 “If you look at the dish we serve it may not look anything like the traditional Catalan dish – but it certainly tastes like it!” he assures us, “In a way, what we’re doing here is creating odes to Catalan cuisine.”

While Jordi’s grandma used whatever bread and olive oil was available in her kitchen, for Jordi’s recipe only the finest quality ingredients will do.

We initially wondered why Jordi didn’t use a sweeter bread, but he says the bread is really just there as a vessel for the chocolate and olive oil, and we totally agree. In Barcelona you’ll see salt and olive oil used with chocolate a lot in fine dining restaurants and you can buy olive oil chocolate as well.

Jordi serves a more complex version of his Grandma’s dish at Cinc Sentits. He places roasted macadamia nuts on the bottom of a dessert dish, then adds a layer of the most decadent chocolate ‘mousse’ we’ve ever enjoyed, followed by a generous sprinkle of bread crumbs made from the Coca de vidra, and finally, a quenelle of delicious olive oil ice cream. It’s creative contemporary Catalan cuisine in a nutshell.