If I was forced to choose a favourite part of Australia, it would have to be the ruggedly beautiful Kimberley region of northern Western Australia. There are so many things to do in the Kimberley region from embarking on off-road adventures to take in dramatic and often other-worldly landscapes to absorbing ancient Aboriginal art and spotting bird life and wildlife.

If driving along corrugated red dirt tracks to discover pristine national parks that host otherworldly rock formations, dramatic gorges with soaring cliffs, sandy creek-beds and serene rivers that surge during the wet season, is your idea of adventure, then this is also the region for you.

Before I tell you about the best things to do in the Kimberley region, I have a favour to ask. Grantourismo is reader-supported. If you’ve used our guides and itineraries on your travels and found them inspiring and informative, please consider supporting Grantourismo by using our links to buy travel insurance, rent a car or campervan or motorhome, book accommodation, or book a tour on Klook or Get Your Guide.

You could also buy us a coffee and ask us a travel question and we’ll turn the answer into a post; purchase something at our Grantourismo store where we have products designed with Terence’s images including fun reusable cloth face masks; or buy something on Amazon, such as these cookbooks for culinary travellers, travel books to inspire wanderlust. Now let me tell you all about the best things to do in the Kimberley region of Western Australia.

Things To Do In The Kimberley Region of Northern Western Australia

Note that the Kimberley region of northern Western Australia is best visited in the dry season from April to October. If self-driving you will need to rent a 4WD or hire a 4WD campervan or motorhome. See our tips for doing road trips in Australia.

If you don’t have experience driving Australia’s rough red tracks, consider an escorted private or small group tour. Luxury Escapes currently has a 6-day luxury small group tour including a stay at Purnululu and a scenic helicopter flight starting at A$4,499.

Exploring enchanting Purnululu National Park and the UNESCO World Heritage listed Bungle Bungle Range is arguably the best of the best things to do in the Kimberley region of northern Western Australia. The national park is home to the colossal ochre ‘beehive’ domes pictured above and below, called Purnululu in the local indigenous Kidja language – ‘purnululu’ meaning ‘sandstone’ – but named the ‘bungle bungles’, a misspelling of a type of grass. Formed over 350 million years ago, it’s said that white Australia, mind-bogglingly, only became aware of the massive rock formations in the 1980s, although the Kidja people have long known they were there.

I first set eyes on the stupendous striped domes in the late Eighties and it was the highlight of a Kimberley road trip packed with breath-taking sights. Some 3,000 square kilometres in size, ancient Purnululu National Park hosts a handful of unmissable attractions, starting with the immense sandstone rock formations, which are classified as conglomerates, rocks consisting of boulders pebbles shaped by rain over millions of years. The stripes are actually layers of clays, with some stipes reddish, rust and ochre-coloured due to oxidised iron compounds, while the dark stripes are due to algae in the more porous parts.

Hiking Echidna Chasm in the northern part of the national park, and Cathedral Gorge in the south, each of which are around an hour’s walk car parks are the highlights of a visit. If time allows, a day-long trek to lofty Piccaninny Gorge, which is an 18km round trip, is a must, but needs to be well-planned, done in winter only, and you’ll need to take supplies. Other allures include an abundance of bird-life (some 130 species), ancient indigenous rock art, and cooling swimming holes. Taking in the spellbinding landscape from the air is essential; several operators off scenic helicopter flights from Kununurra, the nearest town. Note that Purnululu National Park is only open from April to December and you’ll need a high clearance 4WD. 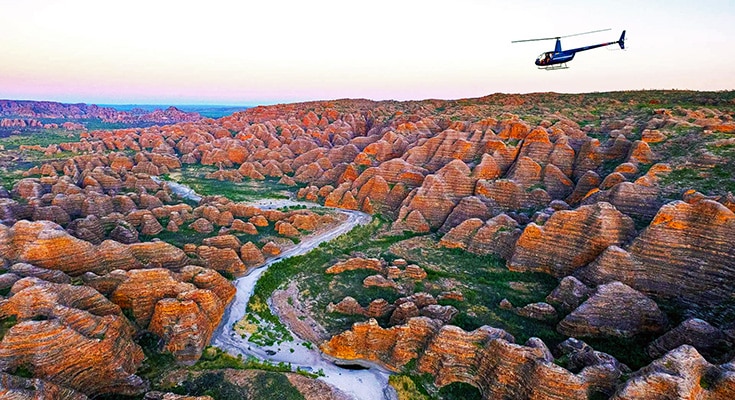 While many advise skipping Mirima National Park if you’ve been to Purnululu National Park, Mirima is easily another one of the best things to do in the Kimberley region and is a must as far as I’m concerned. Visit Mirima first, which is like a mini Bungle Bungles in parts, otherwise you might be disappointed after Purnululu. More accessible than Purnululu – also accessed from Kununurra – another spectacular ancient landscape of sandstone rock formations awaits you here. Dating back some 350 million years, the domes here were formed only in the last 20 million years.

The highlight is Hidden Valley, which secrets away spinifex-covered hills and beautiful boab trees, which you can enjoy on easier bush walks than those at Purnululu. It takes only 30 minutes per track to complete two sign-posted walking trails along which it’s possible to spot plenty of birdlife, including honeyeaters, finches, black kites, and, if you’re lucky, white quilled rock pigeons. You might also get to see dragon lizards, monitors, wallabies, echidnas, dingoes, and maybe even a snake. You’ll definitely see some tracks. I recommend going in the afternoon to enjoy the gorgeous golden light of magic hour before sunset, but take care driving back in the dark and take care not to hit any wildlife.

The grandiosa Windjana Gorge soars dramatically some 100 metres above Lennard River, which swells during the monsoon season but in the dry season when you visit will consist of a series of enticing natural pools. Look out for the freshwater crocodiles swimming and sunbathing on the riverbanks. While you’re here, don’t miss the Lillimooloora homestead ruins, dating to the 1890s, which were once a police outpost and the site of the shooting of a constable by Jandamarra, a legendary Aboriginal tracker.

If you were impressed by Windjana, prepare to be blown away by Tunnel Creek, a 3-metre by 15-metre wide and 750 metre-long passage shaped by the creek as it forced its way through the Napier Range range. You can only hike to the end of the tunnel during dry season, although even then you’ll be knee-deep in water in some parts and be prepared to come across some bats along the way. It’s worth it to see the splendid Aboriginal rock art on the stone walls at the end.

The gobsmacking Geikie Gorge is best experienced on a cultural boat cruise with an indigenous guide. The boat tours run between May and October and offer abundant opportunities to marvel at the 30-metre high walls carved out over millions of years by floodwaters through the Fitzroy River. Expect to see plenty of freshwater crocodiles, fruit bats and bird life, fruit bats as you learn about the indigenous cultural heritage of the area and the ancient limestone reef on the fascinating and entertaining guided tours. 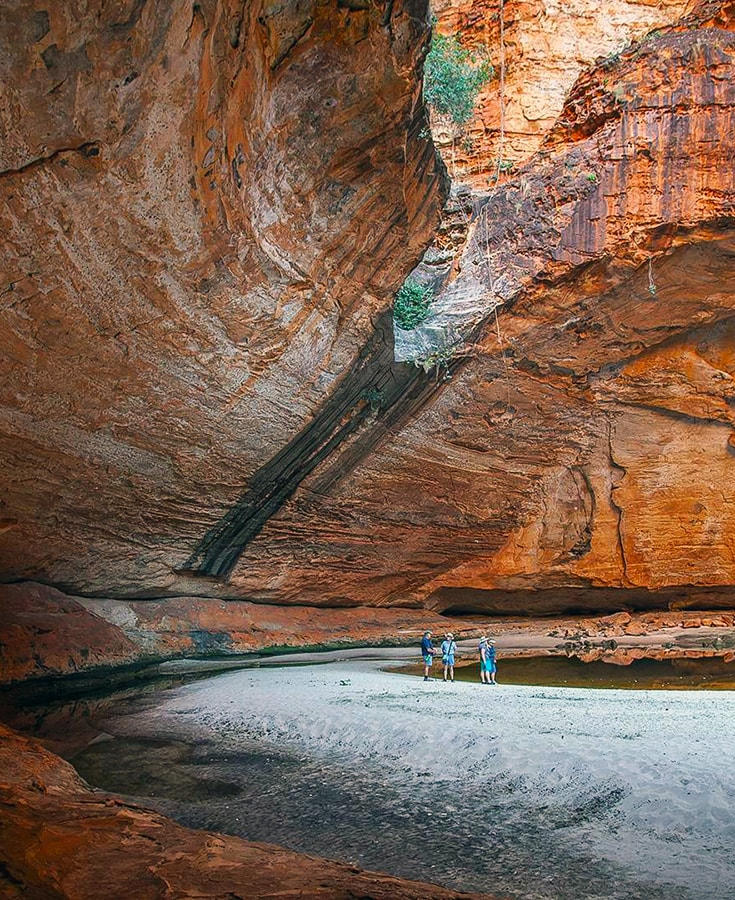 For the adventurous, driving the 660-kilometre long Gibb River Road between Derby and Kununurra is another of the best things to do in the Kimberley region. Only possible during the dry season, this epic road trip needs to be well-planned and should only be undertaken with a good driver with off-road experience behind the wheel. Although it’s a few hundred kilometres shorter than the sealed highway, road conditions make this a much more challenging drive and a longer route in terms of time, however, the rewards make the effort and expense worth it.

While driving the Gibb River Road is as much about the journey as the destination(s), the route gives you access to some of the spectacular sights above, such as Tunnel Creek and Windjana Gorge, along with quintessentially Australian outback landscapes. Expect plenty of panoramic vistas of parched earth, sandy riverbeds, empty plains, and rugged mountain ranges carved by majestic gorges, such as Chamberlain Gorge, where you can do a boat cruise to see wonderful Aboriginal art, and Emma Gorge, at El Questro Wilderness Park, where a bush walk will take you to a waterfall and gorgeous natural swimming hole.

Note that the Gibb River Road was originally established as a transport route for cattle stations to move their stock, so don’t spontaneously decide to explore any tracks off the main road, which probably lead to cattle stations or Aboriginal communities. You’ll need to obtain permission first, so make sure you’re taking good maps – yes, paper maps; don’t expect to find an internet signal!

Where to Stay in the Kimberley

At Kununurra, the Freshwater East Kimberley Apartments offer some of the smartest lodgings in town, while Discovery Parks Kununurra is right opposite Lake Kununurra and has a pool. At El Questro Station, there are handsome bungalows at The Station while Emma Gorge Resort has safari style tents with private bathrooms and a pool.

Have you been to northern Western Australia? What do you think are some of the best things to do in the Kimberley region?