This Russian navy style macaroni recipe for Makarony Po-Flotsky or Макароны По-Флотски makes my spicier rendition of Fleet Macaroni or Soviet Bolognese. A dish cooked up for naval forces, particularly submarine crew, it was popularised during the Soviet period when it became a canteen staple. A nostalgic favourite of the Russian diaspora, it’s one of the few dishes Russian grandfathers cooked.

My Russian navy style macaroni recipe makes my spicier take on a simple Soviet era pasta dish called Makarony Po-Flotsky or Макароны По-Флотски in Russian, which translates to ‘fleet macaroni’ or ‘navy-style macaroni’, which gives an indication as to the early origins of this USSR canteen staple.

It was a dish cooked for the naval forces, particularly submarine crew, who got to eat better food than other seamen to make their months underwater more tolerable. Their rations even included cases of red wine!

A quick, easy and affordable dish to prepare during the Soviet period, when a standard fleet macaroni recipe included no more than a handful of ingredients – pasta, minced beef, onions, oil, and salt and pepper – the old-fashioned dish evolved in the diaspora, becoming a comfort food favourite for nostalgic Russian immigrants.

Before I tell you more about my Russian navy style macaroni recipe for makarony po-flotsky, I have a favour to ask. Grantourismo is reader-funded. If you’ve enjoyed my Russian recipes, Cambodian recipes or any of our recipes on the site, please consider supporting Grantourismo by using our links to book accommodation, rent a car or campervan or motorhome, buy travel insurance, or book a tour on Klook or Get Your Guide.

Now let me tell you about my Russian navy style macaroni recipe for makarony po-flotsky or ‘fleet macaroni’.

This Russian navy style macaroni recipe will make you a spicier rendition of the classic Soviet period dish makarony po-flotsky or Макароны По-Флотски in Russian – ‘po’ means ‘in the style/fashion of’, while ‘flotsky’ refers to ‘fleet’, as in ‘navy fleet’ – hence ‘fleet macaroni’.

It was also called ‘Soviet Bolognese’. While delicious, aside from minced beef and onion, this simple yet tasty Russian pasta dish shares little with the Northern Italian specialty.

Ragu alla Bolognese has a richer meat sauce and greater depth of flavour – something I’ve tried to inject into this makarony po-flotsky with spice, rather change the identity of the dish with tomatoes.

My Russian navy style macaroni recipe actually doesn’t stray too far from the original recipe, which is well-documented – so there are no mushrooms nor red wine, and definitely no blackberries, which I spotted in one recipe.

Instead, I’ve opted for spices such as cumin and paprika, which you’ll find in many of my other Russian dishes, especially my Stroganoffs, such as my beef Stroganoff, chicken Stroganoff and mushroom Stroganoff. 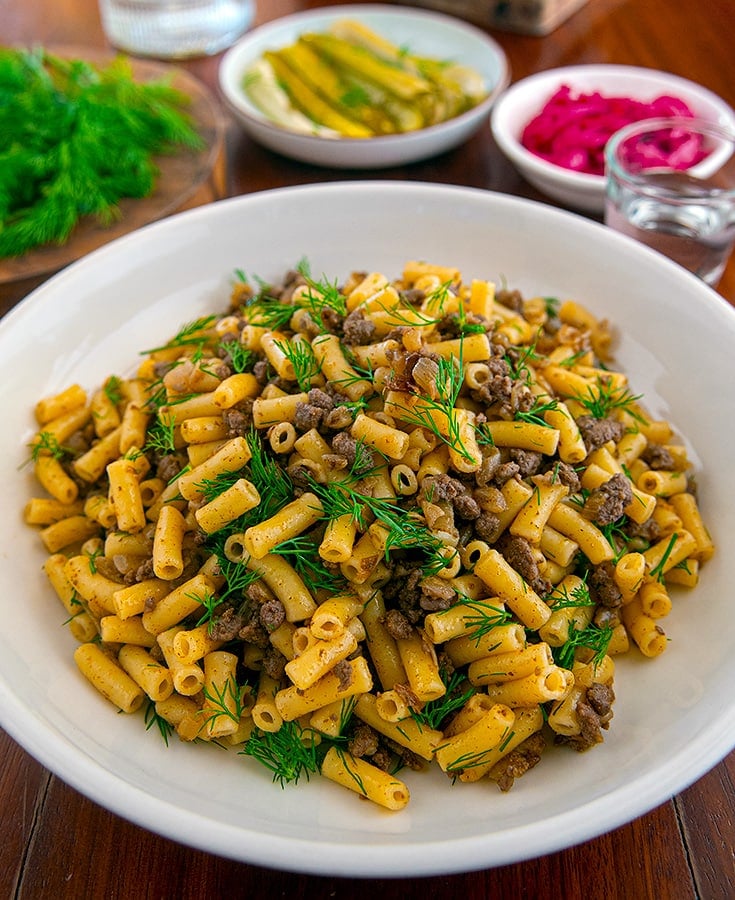 I also use loads of fresh fragrant dill, that quintessential Russian herb that finds its way into most of my family recipes. I remember its scent filling my grandfather’s garden and grandmother’s kitchen in their red-brick home in Western Sydney.

Which is where I should point out that one of the most fascinating things about Russian navy style macaroni is that it’s a dish that a lot of men and women my age of Russian-Ukrainian heritage will tell you was one of the few dishes that their grandfathers cooked.

Domestic spaces were very much delineated back in the day, and while there’s no denying my Russian grandfather was a hard-working man, he looked after the veggie garden and chooks, house repairs, and stoked the fire in the laundry, but he rarely ever cooked.

Papa helped baboushka with pickling and preserving, and he minced the meat that baba bought from the butchers in Blacktown. But about the only time he cooked was if baba was sick – or he was making his Soviet Bolognese. Perhaps that was due to the macho origins of the dish?

My grandparents’ navy style macaroni actually tasted more like Australian spaghetti Bolognese than it did authentic ragu all Bolognese. They even sprinkled ‘parmesan cheese’ on top. (My dish probably makes something more akin to the original.)

However, it was eaten as all good Russian meals were, with gherkins and rye bread on the side – and washed down with shots of vodka rather than red wine.

Just a few quick tips to making my Russian navy style macaroni recipe. I’ve stuck with macaroni here, but you can really use any pasta you prefer. Follow the instructions on the packet, however, for a macaroni similar to what I’ve used here, it should take around 8 minutes or so until al dente.

This dish comes together quickly and will be close to ready by the time your pasta is done, which was part of the point of the dish, that is was easy to prepare – as well as filling and energy-giving. 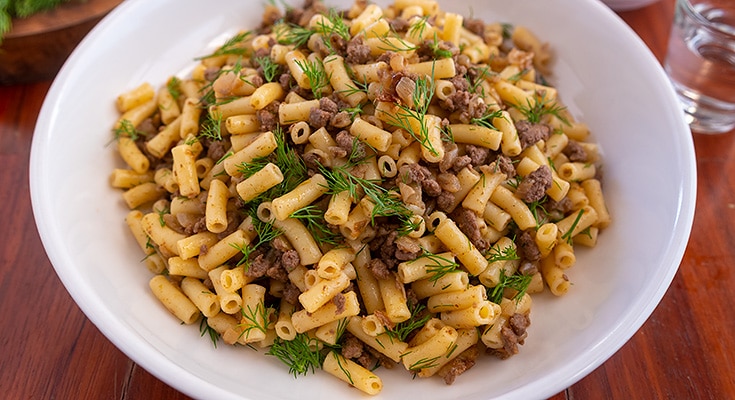 We use a round flat bottomed wok, but you could use a frying pan or skillet. Cook the onion just until soft and almost transparent, then add the spices, seasoning and ground beef, making sure to use a wooden spoon or spatula to combine everything well and break up the minced beef so there are no clumps.

When the beef is just done – don’t over-cook it as you don’t want it to dry out – make sure to taste it and adjust the seasoning and spices to your palate. I have to confess to using a bit more cumin than I recommend here.

If the beef is a little dry (although it really shouldn’t be), add a tablespoon of quality virgin olive oil and/or pasta water.

Throw your chopped fresh dill in now and combine well, then garnish with more dill (you can never have enough dill) and distribute between plates.

Please do let us know in the comments below if you make my Russian navy style macaroni recipe for makarony po-flotsky or Макароны По-Флотски  as we’d love to know how it turns out for you.