This egg bhurji recipe makes the delicious classic Indian spicy scrambled eggs with a little twist courtesy of a different scrambled egg technique. Eaten at all times of the day with myriad kinds of Indian bread – as well as bread rolls – it’s a rich fragrant version of the kind of scrambled eggs that we love.

The first time I cooked egg bhurji it reminded me of a great Indian feast. These Indian spicy scrambled eggs have all the flavour notes and aromas of Indian food that we love so much. The word ‘bhurji’ means ‘scrambled’ and you’ll see ‘anda bhurji’, ‘anda’ meaning ‘eggs’ in Hindi.

There are many egg recipes in Indian cuisine besides egg curries or egg masala. Parsi cuisine in particular – which developed with migrants from Persia who settled on the coast of Gujarat – has many egg dishes that I will be exploring in the future.

This egg bhurji recipe makes a scrambled eggs dish that is spicier than the classic Parsi egg dish called akoori (or akuri), to which it is often compared. Egg bhurji is a bit more complex, however, boasting wonderful spices so synonymous with Indian, such as cumin, turmeric and garam masala. It’s so delicious!

This egg bhurji recipe is the latest in our series of Weekend Eggs dishes. If you haven’t visited us in a while, we revived our Weekend Eggs series that launched with Grantourismo over a decade ago on breakfast eggs dishes from around the world that we love.

Before I tell you all about this egg bhurji recipe, we have a favour to ask. Grantourismo is reader-supported. If you’ve cooked our recipes and enjoyed them, please consider supporting Grantourismo by using our links to buy travel insurance, rent a car or campervan or motorhome, book accommodation, or book a tour on Klook or Get Your Guide. You could also browse our Grantourismo store for gifts for food lovers, including fun reusable cloth face masks designed with my images.

Another option is to support our epic Cambodian cuisine history and cookbook on Patreon or buy something on Amazon, such as these cookbooks for culinary travellers, James Beard award-winning cookbooks, cookbooks by Australian chefs, classic cookbooks for serious cooks, travel books to inspire wanderlust, and gifts for Asian food lovers and picnic lovers. Now let’s tell you how to make this egg bhurji recipe with a twist.

I’m told by our Indian foodie friend Divya that egg bhurji is often much drier than the Parsi egg dish, akoori. This is probably as a result of being cooked in big batches and being “especially popular at busy locations like train stations and outside offices, sold from street food carts or stalls” Divya explained.

In some parts of India, served on buns from street vendors, bhurji is the equivalent of the late-night kebab on the way home after a big night out. Some other Indian friends (not Divya, of course), swear that bhurji is the best hangover cure.

When I made a really ‘cooked-out’ version of this bhurji egg recipe, it reminded me – unfavourably, I’ll admit – of a dip from my childhood that my mother used to make back in the 1970s. Called ‘mock chicken’, the scrambled eggs-based dip was served with Jatz crackers.

‘Mock chicken’ was a rather dry affair, invented during WWII when meat prices were high and the dish was meant to imitate a minced chicken dish. Despite the valiant inclusion of a couple of eggs, ‘mock chicken’ certainly did not taste like chicken. Sorry, Mum. Despite this, the dip was a popular dish to take to a casual weekend party where you were asked to ‘bring a plate’.

Given that I’m more than a little obsessed with moist soft scrambled eggs, this egg bhurji recipe is the result of my efforts to make a less dry version of egg bhurji. I decided to go with a popular scrambled egg technique in Chinese cooking where the egg yolks and whites are separated and the whites are whisked quite vigorously before being combined with gently whisked yolks. 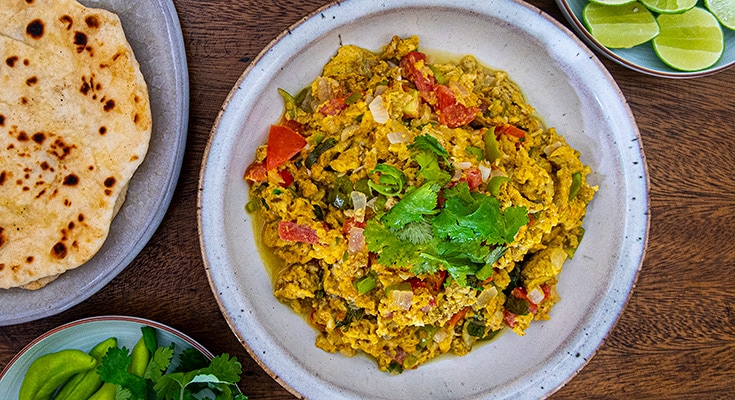 Like so many dishes, preparation is really key here when it comes to this egg bhurji recipe, so I do all my prep before turning the stove on.

In my opinion, this dish is best served with Indian naan bread, although bhurji is eaten with all kinds of bread across India, as well as that late-night special, bhurji on a white-bread bun.

In many traditional egg bhurji recipes, the tomato is optional. I like to use tomato in this egg bhurji recipe, but use the flesh or ‘meat’ of the tomato only as the juice and seeds may make the mixture too moist and may result in watery scrambled eggs – my pet hate that motivated me to learn more about making eggs many years ago.

Also optional in classic egg bhurji recipes is bell pepper (capsicum), which is fine, as I don’t really find it necessary. Another option is a garnish, which is usually mint, which to my taste doesn’t go as well with bhurji as coriander (cilantro). If you’re in the ‘cilantro tastes like soap’ gene pool, by all means use mint.

Egg Bhurji Recipe with a Twist

Do let us know if you make this egg bhurji recipe in the comments below as we’d love to know how it turns out for you.

About the Author: Terence Carter